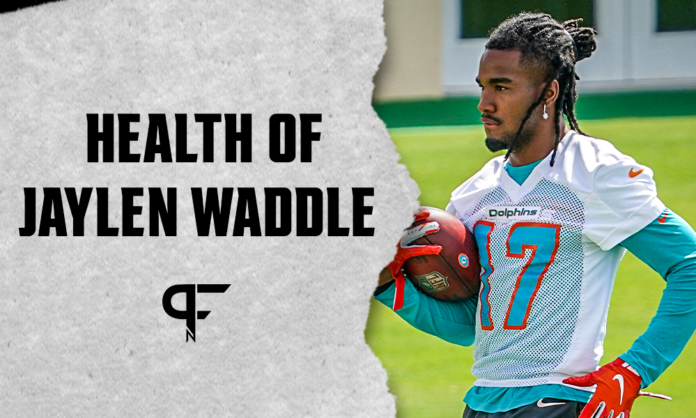 By Adam H. Beasley
July 29, 2021
What's in this article? Click to show
We hear Jaylen Waddle is still not entirely back from his last ankle injury
Miami’s WR room has its share of bumps and bruises
Want more NFL news and analysis?

Miami Dolphins wide receiver Jaylen Waddle had a minor scare Thursday. He went down in a heap after adjusting for a pass from Tua Tagovailoa and needed a few moments to get up.

It was a false alarm — nothing major, and he kept on practicing — but the last thing Waddle needs is an injury.

Waddle’s surgically repaired right ankle is taped tight before he takes the practice field. His left one on Thursday was not.

That’s just one small data point, but it supports what we’ve heard independently — that right ankle is still somewhat of an issue nine full months after the then-Alabama star broke it in a game.

He’s healthy enough to practice, but that’s not a huge surprise. He was “healthy” enough to appear in the national title game less than three months after getting hurt.

But Waddle, even now, still at times walks with a limp. There are some within the organization who believe he doesn’t yet have the full explosiveness that made him such a weapon at Alabama and the No. 6 pick in the NFL Draft.

Asked directly Thursday if he is the whole way back from his injury, with full use of his remarkable abilities, Waddle responded:

“Yeah, I’m feeling good. I’m practicing, getting all my reps, so I’m good.”

Miami’s WR room has its share of bumps and bruises

Now, in fairness, Waddle at even 90% is still faster than most everyone else on the planet at 100%.

And he’s in better shape than some of his more veteran teammates. DeVante Parker and Preston Williams are on the physically unable to perform list. Will Fuller missed Thursday’s practice after leaving Wednesday’s session with an undisclosed issue. And Jakeem Grant didn’t participate fully Thursday.

The cumulative effect of all of these seemingly minor issues is that it justifies general manager Chris Grier’s decision to keep 14 wide receivers on Miami’s roster.

Our guess is the top four, assuming all are ready to start the regular season, will be Parker, Waddle, Fuller, and Albert Wilson, who has impressed in his first two training camp practices since opting out of the 2020 season over COVID-19 concerns.

Of that group, the Dolphins have the highest long-term hopes for Waddle, who has been reunited with his friend and college quarterback Tua Tagovailoa in the NFL.

“I have talked to him a lot about our chemistry and what I expect from him, things I’m looking for and really things we’re looking for as a quarterback room towards the receivers,” Tagovailoa said Wednesday.

Waddle said his chemistry with Tagovailoa is: “Great. We’re out here practicing, out here competing. Just trying to get better.”

In more ways than one.