PRO FOOTBALL NETWORKThe NFL is fast. PFN is faster.
More
Facebook
Twitter
ReddIt
Linkedin
Email
What's in this article? Click to show
Watching film to arrive at a conclusion
Ohio State’s offensive line vs. Clemson
Taking a closer look at this play
Wyatt Davis is considered one of the top OL in the country
Josh Myers does a lot of things right
Thayer Munford flashed in this game
Why Munford stole the show

Justin Fields likes to hold onto the football. He really sits back in the pocket and lets long-developing plays progress before delivering the football. His internal clock is more like a sundial than a digital timer. This is made possible by the hog mollies up front protecting him.

The Ohio State offensive line was among the best in the nation last season, finishing as a finalist for the Joe Moore Award for the best offensive line in the country. The LSU Tigers would end up crowned as the award winners (like with every other 2019 award), but the Buckeyes certainly made a strong case.

Among the Ohio State offensive line stood, from left to right; Thayer Munford (75), Jonah Jackson (73), Josh Myers (71), Wyatt Davis (52), and Branden Bowen (76). Jackson was a personal favorite throughout the 2019 Draft process, ending up as my 35th highest-ranked player.

The technically refined graduate transfer from Rutgers was a strong, experienced presence sandwiched between Munford and Myers. He’d go on to be the 75th pick in the 2020 NFL Draft in April, and Bowen went on to sign with the Panthers as an undrafted free agent. And in 2021, Munford, Myers, and Davis are all draft-eligible. Perfect.

Watching film to arrive at a conclusion

One of the great things about Twitter is the ease of access to ladies and gentlemen who are experts in particular fields. That’s no different in the world of football, where you can find and interact with persons of unique expertise in certain areas.

So when former Arizona State offensive lineman and current private trainer at 5AS1 OL Training Kyle Murphy reached out to me to watch film together, I jumped at the opportunity.

I chose the Ohio State/Clemson playoff game because of the talent level, and the fact it’d be easy to watch multiple prospects in one game between the center and guard combo of Myers and Davis.

However, by the second quarter, Murphy was as intrigued by number 75 as he was the two interior blockers, as it was Munford, not Myers or Davis, having a gem of a game to that point.

The Buckeyes have numbers here on first down. The Tigers are in a two-high shell, meaning there are only six defenders in the box for the six blockers on offense. All the Ohio State offensive line needs to do is execute their assignment, and this play should spring.

But what makes playing a mobile quarterback so dangerous is the added layer he brings. He’s not a blocker, but he is another body to account for, making the play a 7v6 vs. a 6v6.

Get off is extremely important in offensive line play. Being late out of the stance can be costly, especially when running a stretch concept that is supposed to require a cutoff block.

Taking a closer look at this play

If the above play is taken frame-by-frame, you can see that Munford’s covered more ground than anyone early on in this rep, as he’s tasked with trying to reach number 13 so he can’t slice through the B-gap and blow up the play. He gets immediate help from Jackson at LG, and Jackson does a fine job releasing at the last moment to reach a crashing number 47.

Munford does an excellent job remaining in a nice hinged position with good knee bend, and paired with the momentum of the defender, he simply continues driving on the angle given rather than unnecessarily fighting to get his head across.

On the second massive J.K. Dobbins scamper, we see much of the same from Munford on the left side. He starts from a good athletic position in his stance with his weight on the instep of his feet with his outside foot at a nice 45-degree angle, but without also opening the left hip toward the sideline. All of this together allows him to reach the inside shade defender here.

On the opposite end, Davis shows why he’s considered one of the top offensive linemen in the country. We’re late in the first quarter, but this is only the third play of the current drive, so everyone is somewhat fresh.

Davis pushing right off his left instep explodes out of his stance, and by just his second step, he’s already gotten his head across the defender in a nice half-man relationship. Now, he needs to get his hips matching his shoulders, which he’s able to accomplish on step three. This play is an encapsulation of everything that makes Davis elite.

Josh Myers does a lot of things right

Myers consistently showed throughout the contest to put himself into the correct positional leverage. On multiple occasions, he’s pulled off some impressive seals while in adverse conditions. Here, he works well on the combo block with Jackson.

He gets his left hand on the back of Jackson to let him know to climb with his other hand under the armpit of the defender as he gets his head across. From there, he simply keeps his body in the correct position to drive on the blocking angle and drives from that point.

Thayer Munford flashed in this game

Munford starts with hand fighting on his left side while getting his right hand underneath the defender’s left armpit. He engages with his hips through his target, and once his left hand gets inside, he’s able to steer the defender out toward the sideline and eventually at a 45-degree angle into the backfield. This creates a gaping hole between him and Jackson to run through, sans the unaccounted for defender there.

But this repetition is highlighted for Davis, and why Munford continually flashed positively in this game. The Ohio State offensive line is tired after driving part of the field at a high tempo, and it negatively affects Davis here. He immediately becomes vertical out of his stance, and he nearly gets ran through by his right tackle.

He does a good job using his right half to let Bowen get the seal and keeps his hips pointed toward the correct angle of pursuit toward the linebacker until the back hits the hash. Davis needed to remain on that angle to cut him off, but he instead takes his hips straight up the hash instead of on the 45-degree angle he was on. That slight adjustment was all it took for the linebacker to beat Davis to the spot.

Why Munford stole the show

When I asked others on Twitter about Munford, the reception wasn’t glowingly positive, despite the good performance against Clemson. It’s important not to take too much from simply one performance, even against top competition, but it can help you look forward and be excited about the future. If Munford can up his play strength just a hair, there’s a chance we see a surge in his draft stock come April 2021.

Throughout the Clemson game, there wasn’t much change in Munford’s play, and that starts with the stance. His conditioning is top-notch, as his hips never began to sag in his stance, and he consistently got off the ball quickly. While the other Buckeyes linemen struggled to keep their engines running on all eight cylinders, he kept the heat up the entire game. 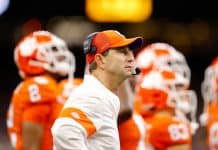 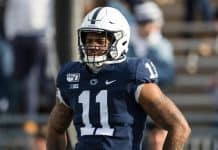