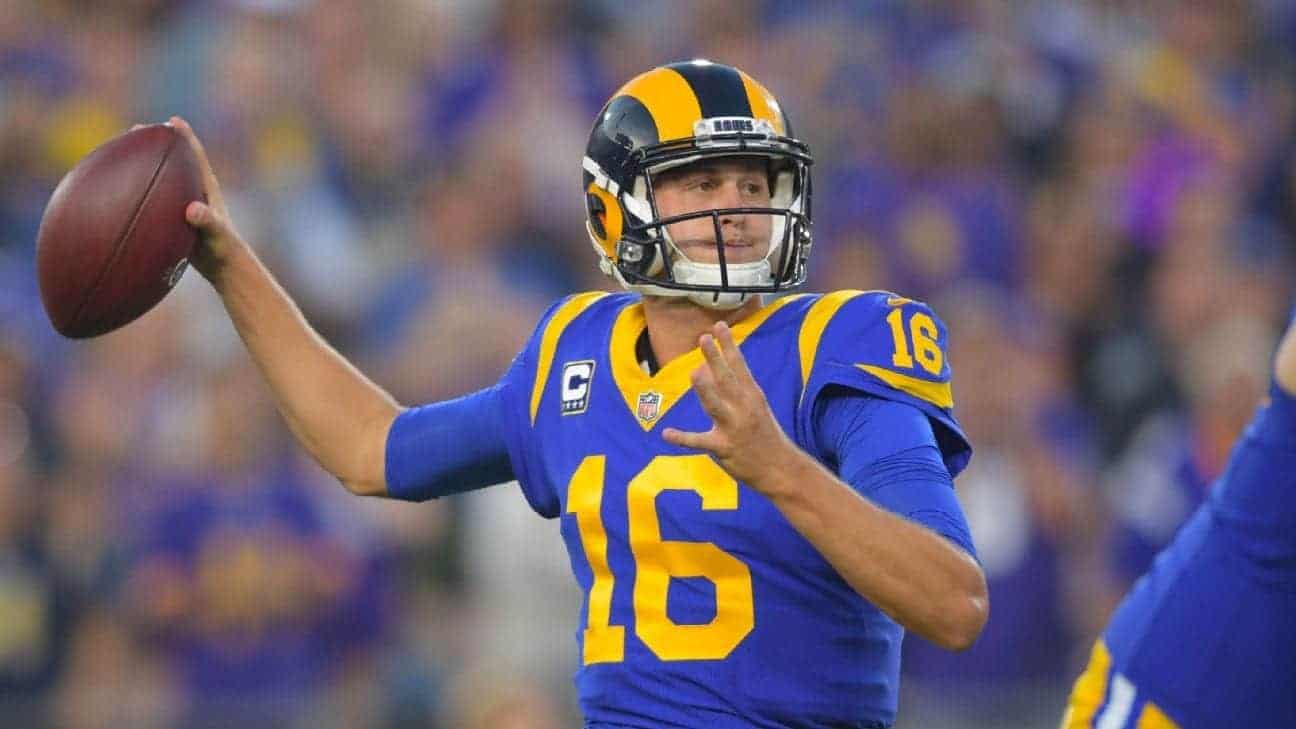 Dov Kleiman is a guest columnist for Pro Football Network. In this article, Dov discusses several NFL topics including how Jared Goff hasn’t played as he has in the past, Dave Gettleman’s struggles as a general manager, achievements by two of the greatest wide receivers in NFL history, Jalen Ramsey’s trade situation, and Vontez Burfict’s suspension.

It will not be surprising if the next step for the Los Angeles Rams is to put up a missing person poster for quarterback Jared Goff, last seen Week 11 of the 2018 season, right before their bye week.

Since that bye week, Goff has thrown only 13 touchdowns to go with his whopping 14 interceptions, and 12 fumbles (6 lost). Before that bye, Goff had a great 2018 season with 26 touchdowns, 6 interceptions, and a passer rating over 100 – which includes the Rams’ 54-51 win against the powerful Chiefs, accounting for 5 total touchdowns without a turnover. That said, something changed against the Lions in Week 13 and Goff still hasn’t fixed it.

The struggles reached full collapse in Week 22 of last season, Super Bowl 53, where Goff and the Rams’ “high powered offense,” spear-headed by wunderkind coach Sean McVay, could only muster 3 points. Goff had a playoff low 57.9 quarterback rating, with an interception and a completion percentage of just 50%.

Many around the league have long speculated it is McVay that should get sole credit for how the Rams’ offense operates – that he’s spoon-feeding Goff the plays and checks before each snap and all Goff has to do is deliver a catchable ball to the open receivers in McVay’s creative schemes. After all, as a rookie under a different coach, Goff looked as awful as a rookie quarterback has ever looked in the league and finished the season with 63.6 quarterback rating. Then, as soon as McVay came along, he became a Pro-Bowl level quarterback with a 28 touchdown, 7 interception season? People have merit in that speculation.

However, this offseason the Rams decided to give the 24-year old a 4-year extension worth $134 million with $110 million guaranteed, a record for guaranteed money in NFL history.
On Sunday against the Buccaneers, Goff threw 3 interceptions and lost a fumble. He couldn’t even deliver the ball to wide-open receivers that McVay schemed free for touchdown plays.

Sean McVay schemes it up beautifully and Jared Goff can't deliver the ball for the touchdown.pic.twitter.com/QtbScdHqjv

And his interceptions were just ugly.

#Rams Jared Goff throws another INT in the first half.

Goff now has 5 INTs this season and only 4 TD passes.

The Rams signed Goff to a 4-year extension worth $134 million and $110 million guaranteed, record for guaranteed money in #NFL history.pic.twitter.com/Rd8fqJjpaS

Now with running back Todd Gurley struggling with knee issues and not getting used as much in the offense, can the Rams count on Goff to shake the yips and return to top form? Was it the right decision to give him the most guaranteed money in NFL history?

$84 million doesn’t buy what it used to

Giants general manager Dave Gettleman has been called a lot of things over the years for numerous reasons: Drafting a running back second overall in the draft over a franchise quarterback, trading away Odell Beckham Jr. in his prime after already giving him a massive contract just a year prior, giving 31-year old running back Jonathan Stewart a $6.9 million contract only to later realize he was on his last legs, rescinding the franchise tag off CB Josh Norman after he had an All-Pro season in the Panthers Super Bowl year in 2015, and lastly letting young star safety Landon Collins walk away in free agency to sign with the Washington Redskins.

Or wait, maybe the last one was the right decision.

The Redskins made Collins the highest-paid safety in league history with a six-year, $84 million contract this offseason and it’s safe to say that Collins hasn’t lived up to that billing.

Through 4 games this season, Collins has not forced a fumble, intercepted a pass, sacked the quarterback, or broken up a pass. Not one significant splash play made by the highest-paid safety in league history to impact a game.

It seems Gettleman was right not to franchise tag or re-sign Collins. It seems the Redskins made a mistake signing another defensive back that Gettleman let go – first Norman to a record deal for a cornerback, and now Collins.

Heated exchange between Landon Collins and some members of the Giants postgame ? pic.twitter.com/ekeDXMoCDP

Not too bad Larry. pic.twitter.com/RcU4444sqp

Don’t take for granted being around to watch these greats play.

The curious case of Jalen Ramsey

A recent report about the Jaguars situation with All-Pro cornerback Jalen Ramsey mentioned the team turned down two first-round picks for the disgruntled cornerback. Ramsey wants out of Jacksonville – he’s been sick of all the losing, the offensive ineptitude, and executive Tom Coughlin and head coach Doug Marrone not being able to relate to young players such as himself.

By the way, in case you forgot, this happened yesterday between Jalen Ramsey and Doug Marrone.pic.twitter.com/qXJaPpSnKU

Ramsey has asked to be traded from the team, and the Jaguars asking price has been high – very high if they turned down two first-round picks. But can anyone blame them? They value a shutdown All-Pro cornerback in his prime over draft picks. The question is, however, can they keep him long-term? If they can’t, turning down two first-round picks sounds crazy. If they can, it makes perfect sense.

There hasn’t been a dirtier player in recent NFL history than Vontaze Burfict, the current Raider and former Bengal linebacker. Burfict has incurred $469,000 in fines for on-field incidents in his career and has been fined or suspended 15 times, which has cost him over $4 million in game-checks throughout his career.

After a helmet-to-helmet hit Sunday on Colts TE Jack Doyle, who was on his knees and could’ve easily been touched down at any part of his body, the league decided it was time to send a stronger message to Burfict and the public. These types of repeated actions are unacceptable. Burfict, who was with the Raiders in London getting ready to play the Bears, has been suspended for the rest of the season, which results in a total of 12 games lost the rest of the year. Good riddance, and hopefully the league doesn’t reduce the suspension on appeal.

#Raiders LB Vontaze Burfict has been suspended for the rest of the year for this hit, per @RapSheetpic.twitter.com/shskk2BUw3