Seattle Seahawks’ second-year wide receiver D.K. Metcalf saw some struggles against NFC West opponents as a rookie last year. However, the hotly anticipated selection from the 2019 NFL Draft managed to finish the year as the WR33 in full-point PPR leagues.

As a member of the Seahawks, Metcalf will make familiar foes of the defensive backs for the Arizona Cardinals, Los Angeles Rams, and San Francisco 49ers. Seeing names like Richard Sherman, Patrick Peterson, and Jalen Ramsey two times a year each seems like a daunting task for even established WRs, so how did the Ole Miss product fare in his debut season?

On the most recent episode of The Fantasy Force Podcast, Tommy Garrett and I were talking about some of our favorite ADP values. When talking about the fifth-round of redraft leagues, teammates Tyler Lockett and D.K. Metcalf became the topic of discussion.

After his inspiring performance against the Philadelphia Eagles in the postseason (7/160/1), Metcalf left a little to be desired in his follow up against the Green Bay Packers (4/59/0). Yet, Tommy and I are both of the belief that this season could see Metcalf become the primary WR at CenturyLink Field.

Metcalf’s first meeting with the Rams resulted in his second NFL touchdown. The Week 5 matchup only netted him 2 catches on 3 targets for 44 yards, with the TD salvaging an otherwise quiet day. The rematch in Week 14 proved much better for him, though, as Metcalf caught all six of his targets from Russell Wilson for 78 scoreless yards.

Both of Metcalf’s meetings with the Rams resulted in double-digit point totals. Yet, if he is going to take the next step in his career, pushing a little higher in the teens on scoring totals will be vital for fantasy players expecting big days.

Metcalf vs. the Arizona Cardinals

If there is a dark spot on an otherwise impressive resume for Metcalf, it was his performance against Patrick Peterson and the Cardinals. With Chandler Jones ensuring Wilson was on the move all day, Metcalf and Lockett were starved for quality opportunities. In his two combined meetings in Weeks 4 and 16, Metcalf garnered a total of five targets amounting to one reception for 6 yards. It is inadvisable to say this trend will outright continue, but for the first matchup against the Cardinals in 2020, Metcalf may be riding more fantasy benches than expected.

Metcalf vs. the San Francisco 49ers

Metcalf saw the 49ers right before the Seahawks bye in Week 10 last season and was thoroughly involved in the game plan. He collected 6 receptions on 10 targets for 70 yards on his way to 11 PPR points. The rematch came in Week 17, where Metcalf again saw double-digit targets (12), catching half of them for 81 yards and a touchdown, finishing the day with 20 points. Truthfully, this was probably a game where most fantasy players faded Metcalf from their lineups.

Seattle finished 23rd in passing attempts in the NFL last year. If that number improves even slightly, there should be brighter days ahead for Metcalf. His touchdown production was admittedly high, but 900 yards on 58 receptions, along with the impressive playoff debut, should not be overlooked.

We cannot currently figure out which tight end will be starting for the Seahawks or who will be Chris Carson’s backup. Without a doubt, however, the wide receiver spots will be dominated by Metcalf and Lockett. Both men possess the talent and opportunity to surpass 1,000 receiving yards each in 2020. In order for that to happen to Metcalf, though, he must produce better against the NFC West. 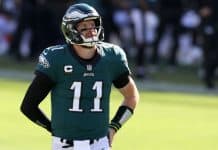