Despite injuries, Kyler Murray having elite season in 2021

Although his injury has hampered his statistics, Kyler Murray is having an elite season for the Arizona Cardinals.

By Lucas Ellinas
December 13, 2021
Jump around this article Click to show
Despite his injury, Kyler Murray has decent statistics
The advanced metrics view Murray in an even more favorable light
Kyler Murray has consistently played at a high level for the Cardinals this season
The advanced metrics behind Murray’s grades
Murray’s rushing yards
Murray and the Cardinals are on pace for a great season

On Monday night, Kyler Murray’s Arizona Cardinals have a crucial matchup against their division rivals and potential playoff competitors, the Los Angeles Rams. Fortunately, Murray made his return last week against the Chicago Bears after missing three games with an ankle injury. And although those missed games have somewhat hurt his statistics, Murray is having an elite season.

Despite his injury, Kyler Murray has decent statistics

So far this season, Murray has thrown for 2,399 yards, 19 touchdowns, and 7 interceptions.

Those statistics don’t compare too favorably to the rest of the NFL’s quarterbacks. The touchdown total isn’t terrible, but he has significantly fewer yards than most of the top players at the position.

However, the injury clearly hinders Murray in that respect. He is averaging 266.6 passing yards per game in 2021, a career-high by almost 20 yards. And thanks to the added 17th game this season, Murray could fairly easily break his career record of 26 passing touchdowns.

Though missing time with an injury is always unfortunate, Murray has clearly been an extremely productive passer when he’s been on the field.

The advanced metrics view Murray in an even more favorable light

Murray’s injury might have hurt his box score statistics, but his sample size is more than large enough for the advanced metrics to paint a clear picture of his season. And they suggest that he has been one of the NFL’s best quarterbacks in 2021.

To prove that point, let’s examine Murray’s performance using the Offensive Value Metric (OVM). The OVM is a grading system created by the (Bx) Movement to evaluate players based on how much they contributed to the creation of their statistics, rather than the statistics themselves.

Going into Week 14, Murray has an overall grade of 28.47. That ranks as the second-best grade among all quarterbacks. In other words, not only has Murray been statistically successful this season, but he has also been one of the most effective players at his position.

Sometimes, a high overall grade can hide weekly inconsistencies. In Murray’s case, this trend is partially true. While there is significant variation in his week-to-week grades, his floor is so high that it isn’t a problem. At his worst, Murray is mediocre. And at his best, he is elite.

For visual evidence of this fact, take a look at the chart below. In it, you can see Murray’s weekly grades, marked by the black dots. The regular-season average for quarterbacks this season is represented by the yellow line. 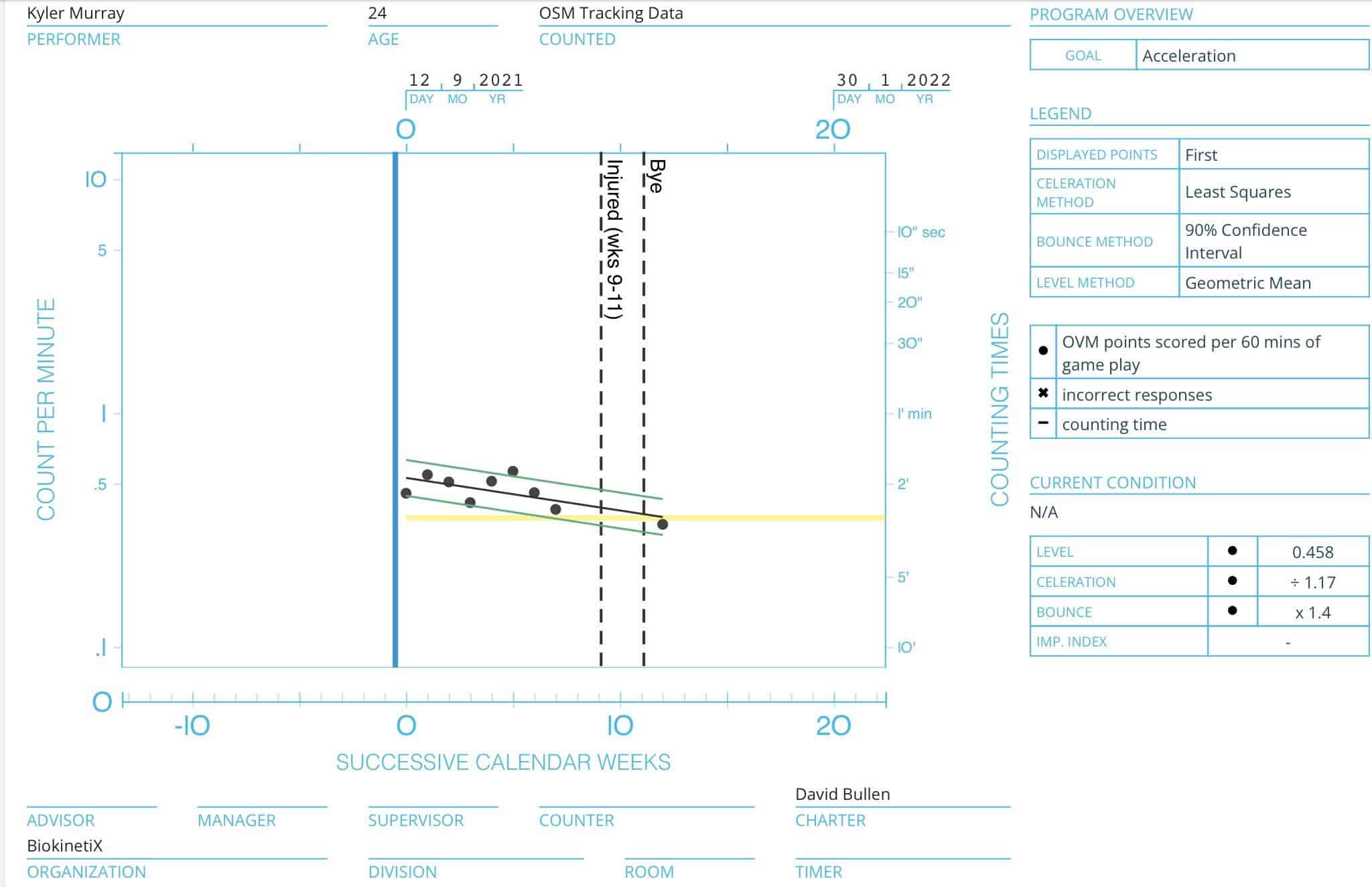 Murray has only earned one grade below the league average this season, an impressive feat. That grade came last week, Murray’s first game back after a four-week absence, perhaps suggesting that the quarterback was still shaking off some rust.

And even that grade came in at 20.06. While that is far from an elite grade, it is equally far from awful. Other than that game, Murray has consistently outperformed most of the NFL’s quarterbacks, even on relatively poor days.

The advanced metrics behind Murray’s grades

To understand why Murray is having such a dominant season, let’s examine the advanced metrics involved in calculating his OVM grades. In many categories, Murray’s numbers aren’t anything special. However, there is one area where he is truly excelling.

Murray is completing a league-leading 72.7% of his pass attempts. According to the NFL’s projections, that number is 6.5% higher than expected, a differential that also leads the league.

Murray has made significant improvements in this area during his career so far. He only completed 64.4% of his attempts during his rookie year, 1.5% lower than it should have been.

He’s come a long way in the last two years and is now completing his throws at a rate above both the efforts of his NFL counterparts and above expectations. In his third season, Murray is one of the league’s most efficient passers.

It is worth noting the OVM only evaluates quarterbacks based on their passing abilities. And Murray is known for the threat he brings with his legs.

However, that skill has been less relevant this season. Unlike last year, when Murray ranked second in the NFL among quarterbacks with 819 rushing yards, he has only rushed for 206 yards and 5 touchdowns so far in 2021.

While it is true that he missed several games, he would be on pace for the lowest rushing total of his career even if he played an entire season thanks to a career-low 3.5 yards per attempt.

Of course, Murray not running the ball as frequently isn’t inherently bad. At least for this season, he has more than made up for the lost rushing production with his arm.

Murray and the Cardinals are on pace for a great season

With his MVP-worthy box score, elite advanced metrics, and a team that is leading the NFL with 10 wins, Murray has a chance to make an impact in the playoffs for the first time in his career.

The road will be difficult; the NFC has several seemingly elite teams that the Cardinals will have to defeat, including the Rams, the defending Super Bowl champion Tampa Bay Buccaneers, and the Green Bay Packers, who already defeated Arizona this season without star quarterback Aaron Rodgers.

But with Murray playing at a high level and Arizona fielding one of the NFL’s best defenses, the Cardinals is one of the few teams that can claim to be legitimate Super Bowl contenders in 2021.