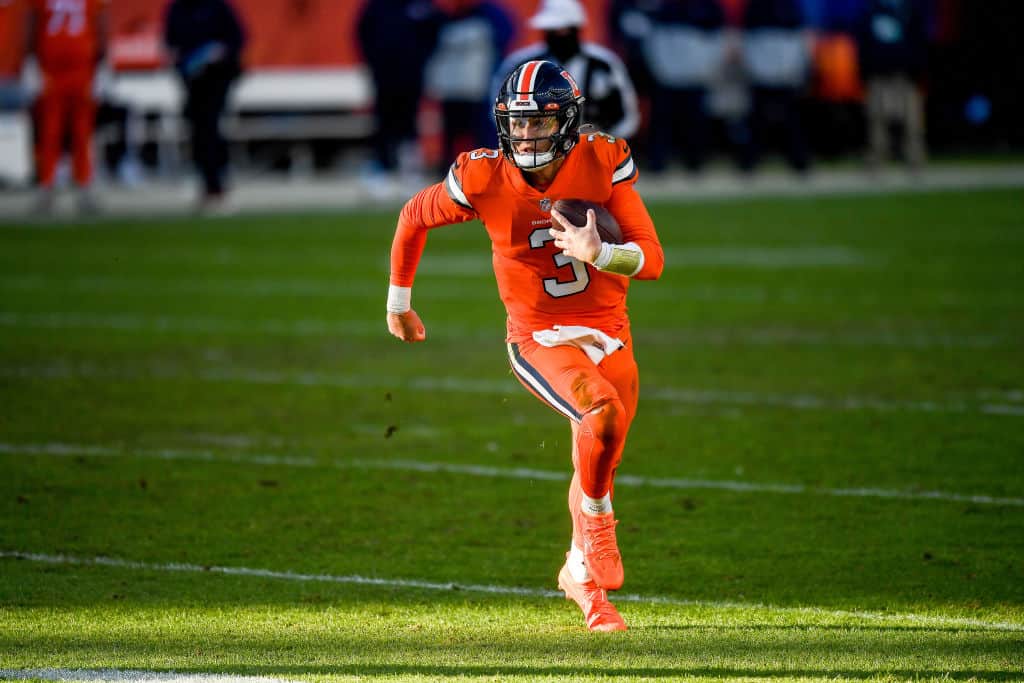 DENVER, CO - DECEMBER 19: Denver Broncos quarterback Drew Lock (3) rushes during a game between the Denver Broncos and the Buffalo Bills at Empower Field at Mile High on December 19, 2020 in Denver, Colorado. (Photo by Dustin Bradford/Icon Sportswire via Getty Images)
What's in this article? Click to show
The Broncos currently project to be around $30 million under the salary cap in 2021
Who are some potential cut candidates for the Denver Broncos in the coming weeks?
Could the Broncos look to restructure or extend contracts to save salary cap space in 2021?
Want more NFL news and analysis?

The Denver Broncos are in an intriguing position heading into the 2021 NFL offseason, both in terms of their roster makeup and their salary cap space. Let’s take a look at how much salary cap space the Broncos have available in 2021, and what potential options they have to open up more space.

As it stands on February 17th, the Broncos have around $30 million in cap space in 2022 with 58 players under contract. However, they have some positions of need they need to target in the upcoming offseason.

Who are some potential cut candidates for the Denver Broncos in the coming weeks?

The Broncos have a handful of intriguing potential cut candidates. While they do not need to make moves to clear salary cap space ahead of March 17th, 2021, the Broncos and new general manager George Paton still have some interesting decisions to make in the coming weeks.

The option year is used in a somewhat limited fashion in the NFL. Yet, the Denver Broncos have two option-year decisions to make regarding their 2021 salary cap. Von Miller is set to earn $17.5 million in base salary and counts $22.125 million against the cap.

However, the Broncos can save all of that salary if they decline his option. The Broncos would save as much as $18 million in salary cap space in 2021 by declining Miller’s option.

Could Jurrell Casey be on the move again?

The Broncos acquired Jurrell Casey ahead of the 2020 NFL season. The final year of guarantees on Casey’s deal came in 2020. Additionally, due to the trade, there is no prorated bonus money remaining on his deal.

Therefore, the Broncos could clear $11.9 million in 2021 salary cap space if they were to move on. Casey started just three games for the Broncos in 2020, registering a tackle for loss and 2 QB hits.

Could the Broncos cut another cornerback this offseason?

The departure of A.J. Bouye has already left the Broncos short at the cornerback position. However, the Broncos could look to clear a further $6.8 million in salary cap if they were to release Bryce Callahan this offseason. Callahan played 10 games in 2020, pulling in 2 interceptions for the third year in a row.

Could the Broncos look to restructure or extend contracts to save salary cap space in 2021?

Releasing players is not the only way for the Broncos to save salary cap space in 2021. The Broncos have a handful of players they could look to extend in the coming weeks and months.

In terms of salary cap space, Ja’Wuan James, Graham Glasgow, and Jurrell Casey, could all open up over $5 million each. However, with the Broncos currently having around $30 million in cap space, there is not an urgent need to restructure deals if they do not need to.

The same names in terms of James, Glasgow, and Casey could all be extended to open up another $20 million. Additionally, Bradley Chubb is entering the fourth year of his rookie contract. The Broncos have until May 2nd to decide on Chubb’s fifth-year option.

Chubb registered 7.5 sacks in 2020 and has 20.5 in his career. He also has 46 QB hits and 80 pressures in 34 games in his career. Extending Chubb now could save around $3 million in 2020 while also getting him under contract before an intriguing edge-rusher market takes shape in 2021.