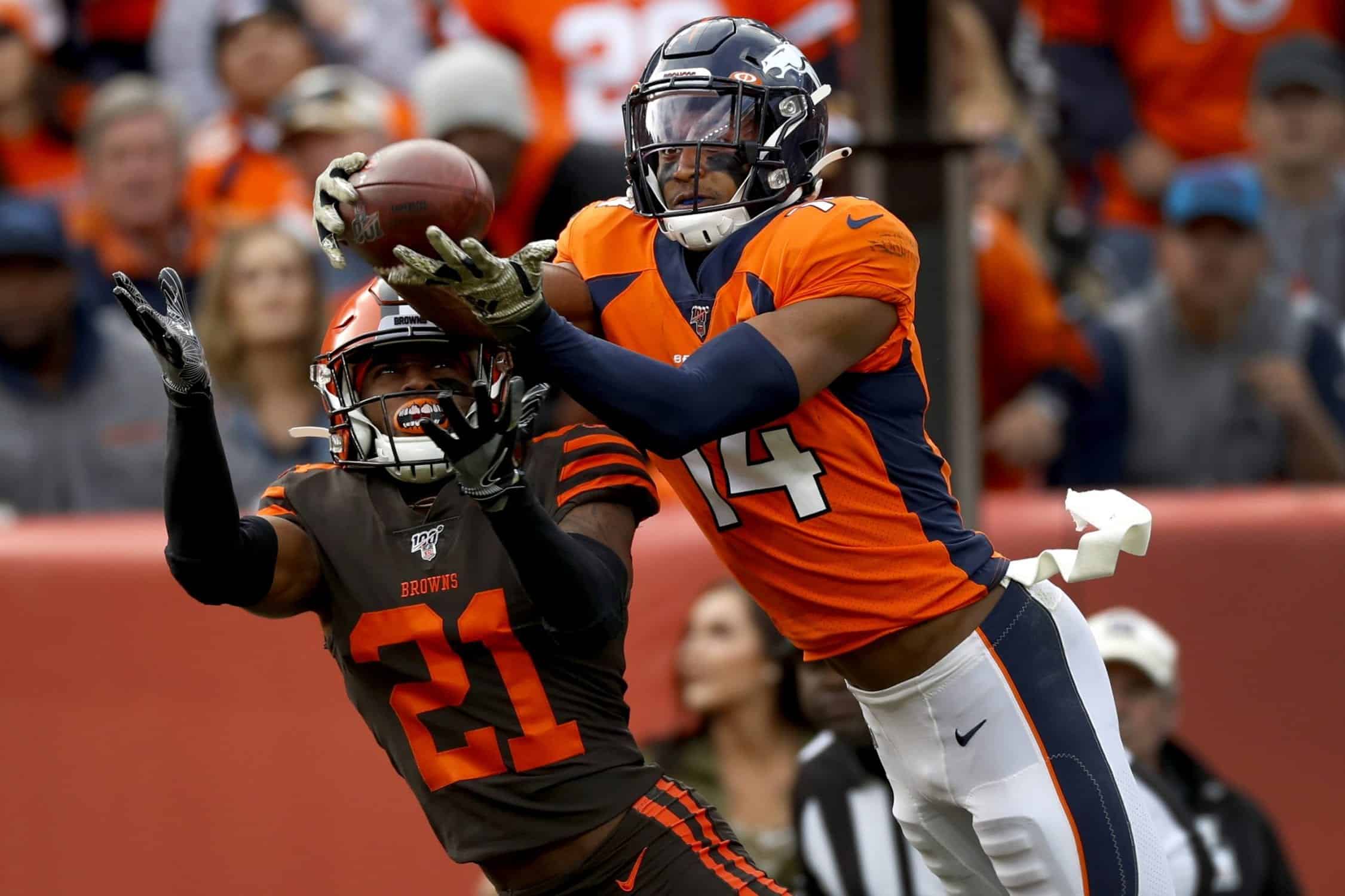 There is a very good chance that the Kansas City Chiefs will be the kings of the AFC heading into the new decade. Fresh off their Super Bowl LIV win in February, Kansas City will control their own destiny if they want to become the face of the NFL.

Having a generational quarterback who’s brought home an MVP in his first three seasons will put you in that tier each year.

The rest of the AFC West did their part this offseason to contend with the likes of the Andy Reid-led super team. The Raiders addressed their needs at linebacker with team-friendly contracts to Nick Kwiatkowski and Cory Littleton. The Chargers fixed their offensive line with Bryan Bulaga and Trai Turner while adding star corner Chris Harris Jr. to an already impressive secondary.

And then there’s the Denver Broncos—the scrappy team lost in the mix during the offseason because of the lack of big additions. Still, the moves that were made couldn’t have come at a better time.

Are the Denver Broncos the sleeper team of the AFC?

It’s too soon to place bets on if the team John Elway has built will continue his legacy into 2020 as a franchise full of potential. But with the added pieces, plus the now seventh seed in the NFL postseason, a quality draft could have Denver right in the heat for a playoff run come December.

The defense has been the focal point since Elway took over as the general manager in 2011. This has been evident through Denver’s performance in recent drafts. Some players selected have stuck, like Bradley Chubb and Von Miller. Others have fizzled, such as Shane Ray and Sylvester Williams.

Even in coaching decisions, Elway has emphasized that defense wins championships. That thought could be bolstered by the success of second-year coach Vic Fangio, who was pivotal to the success of San Francisco in 2012 and the rebirth of Chicago’s “Midway Monsters”. In Fangio’s first year with control, Denver’s defense was their backbone through an underwhelming season.

The 12th ranked defense could either improve or decline based on the moves made over the past 10 days. Still, Elway was able to turn late-round selections into quality starters without paying extra. Knowing the team would likely lose Harris Jr. to free agency, the Broncos traded a fourth-round pick to Jacksonville for AJ Bouye.

The former Pro Bowl corner struggled in coverage last season after signing a $67.5 million deal in 2017. A change of scenery could have the once top cover man back to form until 2021. And for the right price, it looks like a win for Fangio’s defense on the boundary.

The secondary should still be a quality unit on the deep end. Denver elected to place the franchise tag on safety Justin Simmons, who posted a career-high 93 tackles last season while excelling in coverage. Pairing him with do-it-all defensive back Kareem Jackson, the duo will create a tandem that can win across the field.

He handed it to Kareem Jackson to return the fumble for SIX! @ReemBoi25 #BroncosCountry

People also forget about Bryce Callahan after he missed the year with an injury. The Bears’ star defensive back followed his coordinator to the Mile High, but a foot injury cost him a year in the orange and blue. When healthy, Callahan has produced as one—if not the top slot corner in the league.

The return of Chubb, who missed 12 games last season due to injury, will help with the pass rush, but the trenches helped the two off the edge win battles during 2018. Derek Wolfe is gone, but his replacement could be an upgrade. Denver wasted little time throwing the Tennessee Titans a seventh-round selection for five-time Pro Bowler Jurrell Casey.

Casey has been enhanced with knowledge in the 3-4 front since 2015 during his time in the Music City. It also was the start of his consecutive Pro Bowl runs. During that span, the 30-year-old has tallied at least five sacks and 44 tackles.

“Unlimited opportunities to hit the quarterback at your will,” Casey said on the Jim Rome Show about playing in Fangio’s front seven. “That’s what I think about — when you’ve got guys that can rush off the edge [and] push the quarterback into the pocket [and] can pull away double teams, man, you’ve got to be in heaven.”

But it will be the offense that makes or breaks the Broncos next season. If you need any more proof, Kansas City’s defense ranked 32nd and 16th on their runs to the AFC title games and Lombardi Drive.

Can the offense get better?

Defense is critical, but offense will get a team over the hump in the dreaded division.

“You’ve got to be able to slow them down somewhat, which to some degree we did a little bit [in ’19],” Fangio said last season, according to the Denver Post’ Ryan O’Halloran. “But obviously you’re going to have to score some points.”

Elway did his part to address those needs as well.

Not sure if Lions RG Graham Glasgow went too far inside on this particular protection but he made one hell of a play to pick up the looper pic.twitter.com/OgWkAtOR3l

Trading out Connor McGovern for Detroit’s Graham Glasgow, the offensive line hopes to provide stability for second-year quarterback Drew Lock. The 27-year-old will be bullying defenders to the tune of $44 million a season but could live up to expectations after allowing only one sack in his final two years in the Motor City.

The run game should factor into the progression of Lock’s upside as well. Despite not needing a top-flight runner, it never hurts to have a back-up plan—allowing a rival to become an ally.

Melvin Gordon signed a two-year, $16 million deal last week to remain in the division. His final season out in Los Angeles was a forgetful one as he posted career-lows in rushing, but that was more on his own faults. Gordon went all-in on his holdout and the Chargers called his bluff, leading to Austin Ekeler garnering the lead role.

There’s still potential for former first-rounder to be the pivotal player for any offense. In his Pro Bowl seasons, Gordon combined for 2,791 total yards of offense, 91 catches, and 26 total scores. Pairing him with back-to-back 1,000-yard rusher Philip Lindsay will create a dynamic 1-2 punch and allow third-year runner Royce Freeman to be the change of pace runner.

The draft could be the saving grace or downfall for Denver come this season. Speed on the outside will be the key to keeping the Broncos in contention. Similar to the Houston Texans, Lock will need a Will Fuller-type player on the edge to open the field.

Fuller’s success has come both as a vertical threat and a decoy for Bill O’Brien’s offense. His speed forces defenders to play deep, allowing targets such as DeAndre Hopkins and Kenny Stills to break open for Deshaun Watson to extend drives and find the end zone.

The Broncos have their own rising star in Courtland Sutton while Noah Fant is expected to grow in his second year. A player like Alabama’s Henry Ruggs III, who played a similar role during his time in Tuscaloosa, would be the likely pick. If the top runner from the combine is off the board, Oklahoma’s CeeDee Lamb or Baylor’s Denzel Mims would be an excellent constellation prize.

On paper, Denver looks like a roster on the rise, but this is all based off the progression of Lock. The Missouri sensation took a step back in the final year and only flashed his potential while going 4-1 as the team’s starter. Any regression will put Denver in jeopardy of another swing and a miss under center while 17.6 points per game won’t cut it for someone the team believes could be their man of the future.

“The big question is always what’s inside, and that’s the hardest part about that position, is figuring out what’s inside,” Elway said last month at the combine. “Drew’s got that — so far — he’s got the ‘It’ factor. He’s got the confidence to play the position. As I told him, ‘The sky’s going to fall down. It’s going to come caving in. It’s how you handle it when it caves in.’ I think he’s got the ability to do that because of the confidence he has in himself.”

The difference between a sub and over .500 record came by two games last season. Perhaps if Lock would have played against Minnesota and Buffalo, fans would be thinking differently than a 9-7 season.

The early years in a new decade have been kind to Broncos’ fans. In the 90s, Denver went to the playoffs three times before hoisting back-to-back Lombardis for John. In the 2000s, the Broncos would go four of the six times before the mid-way point. And in the 2010s, Denver made five consecutive trips to the postseason before adding a third title for Pat.

Elway has quietly put together a talented offseason that could only build into a quality team come post-draft. The question is; will all the pieces click once on the field?