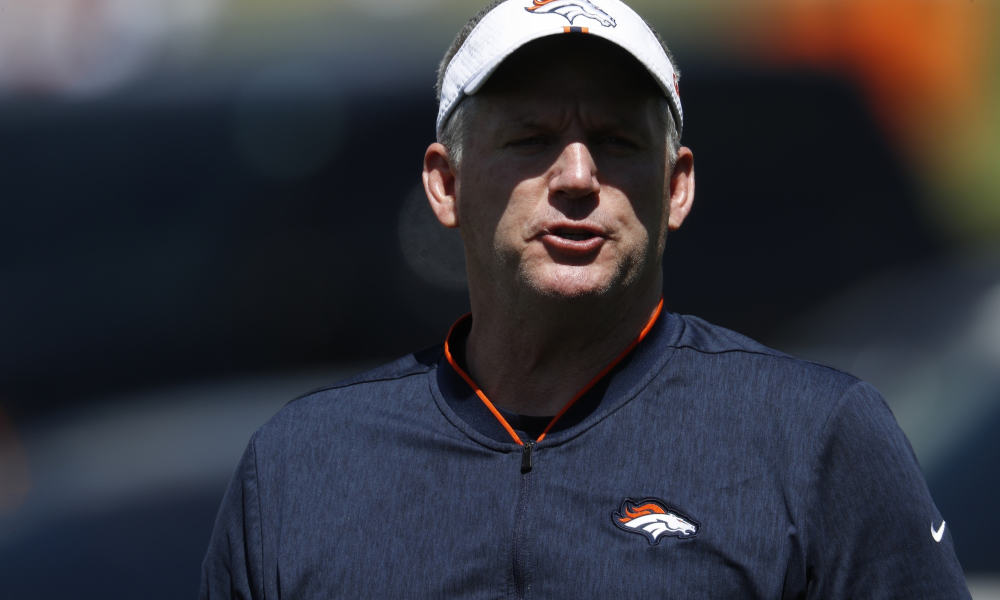 Photo Credit: AP Photo/David Zalubowski
What's in this article? Click to show
Who is Mike Munchak?
What can Munchak bring to the Denver Broncos?
Putting it all together

This offseason the Denver Broncos seemed to make the offensive line and the offense as a whole a priority. Denver went out and signed Ja’Wuan James to a $51 million deal in Free Agency, locking him in as the franchise right tackle. They then doubled dipped in the draft, selecting Kansas State lineman Dalton Risner in the 2nd round. Denver clearly wanted to beef up their offensive front for the upcoming season. With a young Garett Bolles and heavy investments in James and Risner, Denver set itself up for the foreseeable future with three key cogs for their line.

Who is Mike Munchak?

Mike Munchak was a fantastic player, playing for the Houston Oilers for his entire Hall of Fame playing career. Immediately following his retirement, he was offered a job on the Oilers’ coaching staff. He accepted and after 17 years as an assistant coach for the Oilers/ Titans; he became the Titans Head Coach in 2011.

His tenure wasn’t very long, only lasting three years, but he finished with a respectable 22-26 record as a rookie head coach. His leaving had more to do with the restrictions put on his authority than it did his success. Nonetheless, he went and signed a contract to be the new offensive line coach for Pittsburgh.

In Pittsburgh, Munchak guided Alejandro Villanueva and the rest of Pittsburgh’s offensive line to become one of the best in the game. Per Pro Football Focus, Pittsburgh had the most efficient pass blocking line in 2018.

Munchak’s success goes well beyond that in the Three River City. Over the entirety of his tenure, Munchak’s lines finished top 10 in pass blocking efficiency all but one year; over the five-year span, no team in the NFL had a better or more consistent line than Pittsburgh. It’s this level of sustained success that has led many to call Munchak the best offensive line coach in the National Football League.

What can Munchak bring to the Denver Broncos?

The Broncos’ offensive line will be interesting to watch in 2019. The tackles are set with the line book-ended by 2017 1st round pick Bolles and free agent signee James.

The interior of the offensive line, however, is much more of a mystery. Rookie lineman Risner had experience at all positions in college and could project anywhere for Denver. I expect him to get a considerable amount of snaps this offseason at all positions, but it seems Denver is looking for Risner to be their left guard of the future.

This leaves veterans Ronald Leary and Connor McGovern at right guard and center respectively. With the addition of Munchak, this line should be good enough to continue to open up holes for Phillip Lindsay and help keep Joe Flacco upright in 2019.

Ultimately this line is dependent on the progression of Bolles. How much can Munchak help Bolles? Many expected Bolles to have a breakout year in 2018; unfortunately, his 2018 campaign got off to a slow start. However, Bolles started to shine for Denver during the second half of the season.

Bolles’ growth is encouraging for Denver. Bolles was a bit of an older prospect when he was selected in 2017, but it is exciting to see him improve so much. His biggest issue has been penalties, however. He was called for 13 holding penalties in 2018, 3rd most among NFL tackles. If Munchak can help Bolles mitigate these penalties, Bolles can become one of the better tackles in the league.

Another exciting stat for Broncos’ fans? Garrett Bolles had a 4.7% pressure rate in 2018 that finished 10th among left tackles.

Putting it all together

There is no doubt that Munchak will have an instant and profound impact on the Broncos’ offensive line in 2018. How much remains to be seen, but Munchak has a promising young line that if refined, could develop into one of the best units in the NFL. The left side of the line looks to be set for a long time, and hopefully, James will live up to his contract on the right side.

Munchak has some promising players to work with as he makes his transition from the dominant Pittsburgh front to one in Denver very much filled with youth and potential. Denver put a lot of resources into fixing this offense, and with Munchak, fans should be confident that this line will develop under his expertise.