Five 2020 Defensive Rookie of the Year candidates according to RAS

The 2020 Defensive Rookie of the Year won't be named until February, but RAS data can give us a good idea who should be in the running for the award.

Trying to predict who’s going to take home the 2020 Defensive Rookie of the Year award can seem like a daunting task at this early stage. This year’s rookies haven’t even begun their mini-camps yet. But taking a look at the historical data can give us a lot of clues as to who should be in the running for the award come year’s end.

The first AP NFL Rookie of the Year award was handed out in 1957 to Cleveland Brown’s all-time great Jim Brown. Ten years later, the AP split the award into offensive and defensive categories, handing the first Defensive Player of the Year award to Detroit Lions cornerback Lem Barney. Obviously the game has changed immensely since then, and we don’t have RAS data going back that far.

However, going back to the 2000 season seems like a great place to start our deep dive into the award. Of the 20 winners since 2000, we have RAS data for 19 of them, with only Julius Peppers (the 2002 DROY recipient) not logging a RAS grade. So what information can we take away from the past twenty years of award winners?

There are two main trends we see when we look at the list of Defensive Rookie of the Year award winners and their RAS data. The first trend that we see is positional. Since 2000, a whopping 60% of the winners have played linebacker. A defensive end has taken home the award 20% of the time, with the remaining 20% split between defensive tackle and cornerback in equal numbers.

However, that trend has been much less pronounced in recent years. Of the last seven DROY award winners, only 2018’s Darius Leonard has played linebacker. Since 2000, three of the four defensive ends and the only two cornerbacks, have come in the last seven years.

The second heavy trend we see is no surprise. The better the athlete, the better their chances of success. Of the 19 winners we have RAS data for dating back to 2000, only three failed to post an “Elite” RAS grade. Terrell Suggs took home the award in 2003 after posting a RAS of 6.48. Marcus Peters did so in 2015 with a RAS of 7.22. 2018 winner Darius Leonard is the only one to take home the award after posting a “Poor” RAS with a 4.9.

With this historical data in mind, who should we be targeting from this year’s rookie class as the most-likely winner? Before we begin, it’s important to note Redskins’ rookie EDGE Chase Young did not register a RAS grade, and was therefore not in consideration.

If we’re judging our candidates for 2020 Defensive Rookie of the Year on athleticism, then Cardinals first-round draft pick Isaiah Simmons feels like a slam dunk. Throughout the draft process, Simmons was praised up and down for his unique athleticism and his ability to be a chess piece for the Clemson defense. 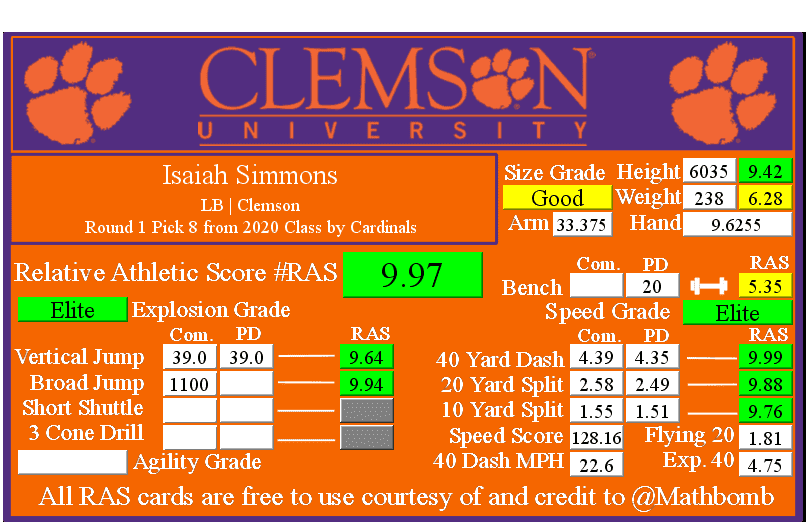 Simmons was billed as a superior athlete, and his testing did not disappoint. Simmons put up an “Elite” RAS of 9.97, falling just short of scoring a perfect 10. The athleticism jumps off the film at you, but Simmons’ chances of winning Defensive Rookie of the Year are going to hinge largely on how the Cardinals decide to use him.

If Simmons is going to primarily be a linebacker in the Cardinals’ defensive scheme, he has a good chance of taking home the award. If they plan to move him around the defense and let him make plays all over, I like his chances even better. However, if they decide he’s strictly a safety in year one, his chances diminish drastically. Right now, the Cardinals list him as a starting linebacker, so he tops the list.

Playing the cornerback position puts you behind the eight ball with regards to one’s chances of taking home the Defensive Player of the Year award. But it’s not an impossible task. Two of the last five players to win the award were corners, with Peters taking home the award in 2015 and Marshon Lattimore following that up in 2017. One thing they both had in common? They were game-changing corners. Who fits that bill from the 2020 rookie class? Jacksonville’s C.J. Henderson.

While Peters was one of the three winners with a non-elite RAS grade, Lattimore took home the award after turning in a perfect 10 on the RAS scale. Henderson fell just short of matching Lattimore’s RAS, turning in a 9.98 RAS of his own. Henderson was billed as the most complete corner available in 2020, and the RAS certainly reflects that. 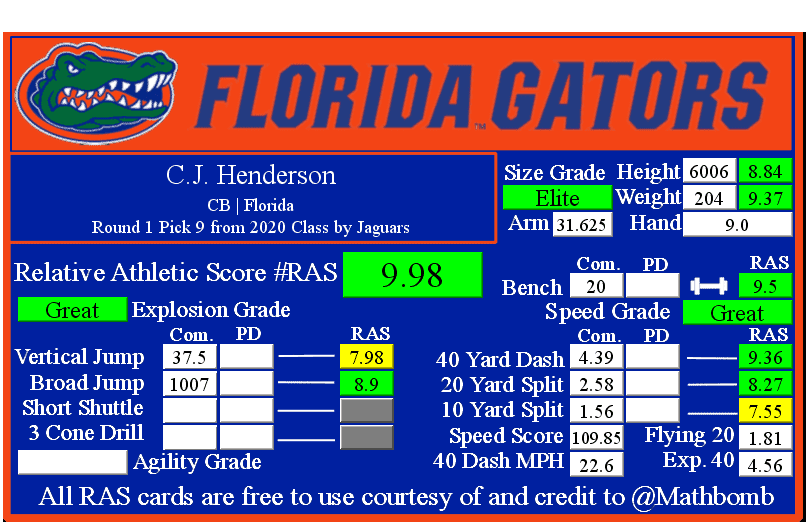 Henderson fits the bill of a game-changing corner in that he is already poised to be a shut-down corner at the NFL level. Even though he’s a rookie, he possesses all the traits of a corner who’s not going to be challenged a lot, which, coincidentally, may ultimately hurt his chances at winning the 2020 Defensive Rookie of the Year award.

The year Peters took home the award he notched eight interceptions. Lattimore took the ball away five times in his rookie campaign on his way to DROY honors. Henderson, for all his coverage talents, wasn’t exactly known to be a ball-hawk. He didn’t have a single interception his final year at Florida, with six interceptions in his three-year career, four of those interceptions coming as a freshman, so he will likely need to find a way to get his hands on the ball in order to claim DROY.

As we’ve seen from the historical data, turning in an “Elite” RAS gives you a leg up on the competition for the 2020 Defensive Rookie of the Year award. But not scoring as an “elite” athlete isn’t a death sentence for taking home the hardware. Three of the 19 winners we have RAS data for did not score as “elite” and of those three, two of them were linebackers, which brings us to our third candidate, Ravens linebacker Patrick Queen. 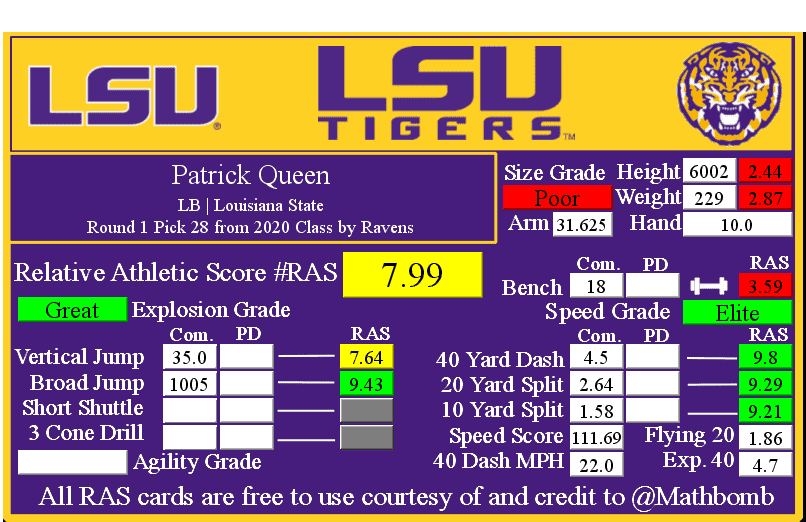 Number 1 overall pick Joe Burrow commanded the headlines for the LSU Tigers last season, but he was far from the only Tiger to turn in a breakout performance. On the other side of the ball, Queen was quietly making a name for himself leading the LSU defense. Queen turned it on most when it mattered most, really bursting onto the scene in the College Football Playoff, notching 22 tackles, 5 tackles for loss, and 1.5 sacks in the three games.

Queen landed in arguably one of the best spots for a young pass rusher getting selected by the Ravens with the 28th pick in the first round. Baltimore has been a force to be reckoned with on defense for years, and Queen should slide into that linebacker group nicely. He may not have the elite athleticism of his counterparts on this list, but his situation warrants his inclusion on this list.

The Los Angeles Chargers had two selections in the first round of the NFL Draft, and naturally the lion’s share of the attention went to their first pick. Justin Herbert comes in as the presumptive replacement for the legendary Philip Rivers and could be an Offensive Rookie of the Year award candidate in his own right. But the Chargers second pick in the first round may have been the better pick overall — at least initially.

Kenneth Murray comes to the Chargers as a complete linebacker and should make a strong case for taking home the 2020 Defensive Rookie of the Year hardware. Murray oozes athleticism and that fact is reflected in the “Elite” RAS he turned in at the NFL Combine. Though he may be a bit undersized, Murray has elite speed and explosion that should make him a factor in both the run and pass game at the next level. 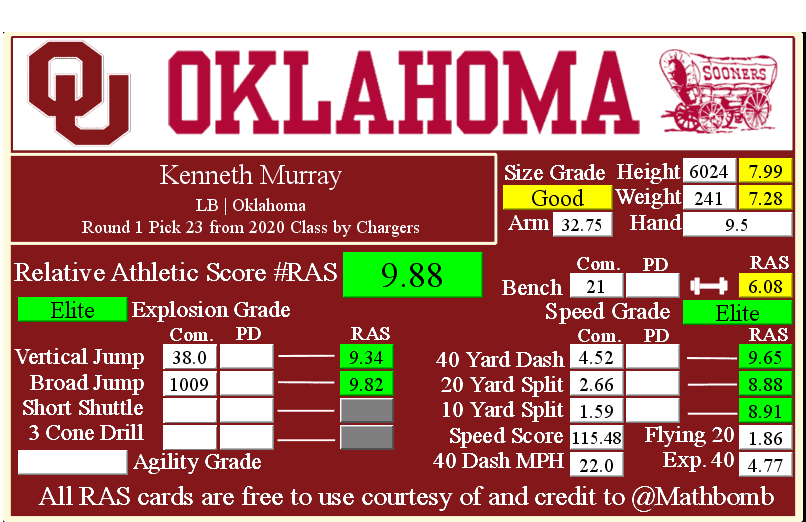 In all likelihood, Murray won’t compete with the likes of Queen with regards to sack numbers, which may prove to be a hindrance when it comes time to hand out the award. But Murray is easily the more complete linebacker, and that will be a factor in the committee’s eyes. If both Murray and Herbert live up to their potential, the Chargers could make it a clean sweep in the rookie awards department.

Coughlin showed good athleticism on tape, showing an ability to be an effective pass rusher off the edge for the Gophers, while also showcasing the ability to drop back in coverage and play in space. Coughlin backed up that tape by showing out during the NFL Combine, putting up an “Elite” RAS of 9.8. 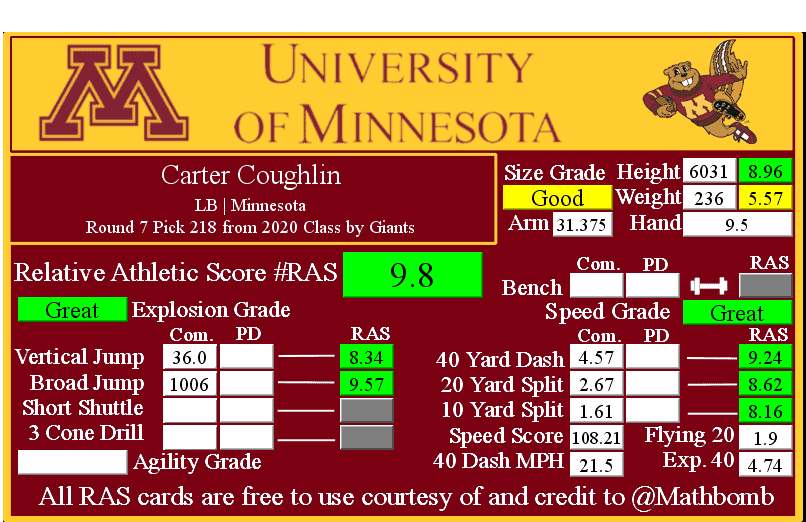 No seventh-round selection has ever taken home the Defensive Rookie of the Year award. In fact, no one picked 40th or lower has ever taken home the hardware. To say that Coughlin would be a dark horse to win the award would be an understatement. But if there was going to be a player to come out of nowhere and claim the award, I like Coughlin’s chances. He’s my underdog candidate for the trophy.