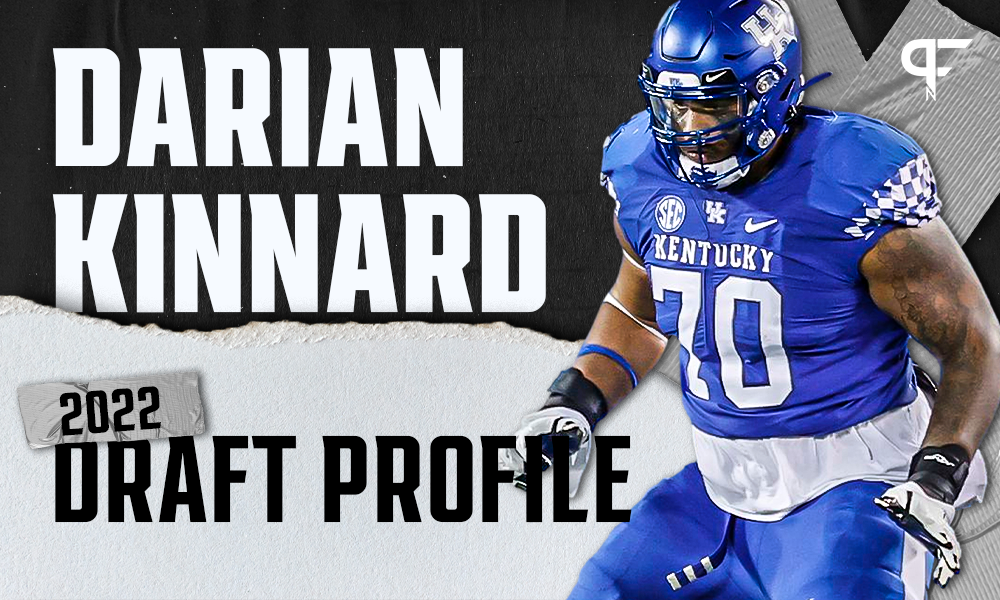 Kentucky OT Darian Kinnard was once viewed as a serious 2021 NFL Draft prospect, but his choice to return for a final season put his NFL aspirations on hold. Now, however, he has the benefit of an open field. Can Kinnard further bolster his scouting report and rise up the draft board ahead of next April?

The man opposite of Kinnard — left tackle Landon Young — was selected in the sixth round of the 2021 NFL Draft by the New Orleans Saints. Young was taller and more experienced, and yet, Kinnard very likely would have gone before him had he declared.

Kinnard has been starting games for Kentucky since 2018, and he’s earned All-SEC consideration since 2019. He was a first-team All-SEC selection across three platforms in 2020. Had he declared, his pro day numbers could have inflated his stock even more. But Kinnard — seeking perfection — chose to return to school to further refine his craft.

What does Kinnard still need to work on, and what makes his NFL Draft scouting report appealing as it is? Let’s take a look.

This guy is massive. With a unique frame and otherworldly size at 6’5″, 345 pounds, Kinnard is truly an eye-catching draft prospect. He has the reach to swallow up opposing defenders in pass protection. With his size, he has a large reserve of natural power to work with. Beyond his size, Kinnard also has surprising mobility. He moves exceptionally well in open space and has fast, urgent feet moving to the second level.

Expanding more on his athletic traits, Kinnard is explosive out of his stance, and he can close ground quickly. The Kentucky OT has definite torso and hip flexibility, and he also owns a good amount of twitch and stored potential energy in his upper body. He possesses enough short-range burst to adjust for stunts, and his recovery athleticism allows him to make up any lost ground.

Among other things, Kinnard has smooth footwork when matching rushers around the edge, and with his frame density, he can absorb opposing power effectively when his hands connect. The Kentucky OT has solid leg drive when latched onto opponents, and he possesses the requisite grip strength to clamp down on attackers with ease.

Kinnard is a fun athlete, but his athletic upside is further compounded by some of his operational tendencies. Kinnard is an energetic blocker in motion and can drive defenders out of plays with relative ease. He has some definite mauler moments where he puts players in the dirt. With his size, the Kentucky product can dominate smaller players — and his grip strength makes it a laborious chore to break free.

Kinnard has a clear fighter mentality in one-on-one situations, and he strategically targets arms to negate rushes, destabilize, and compromise opponents. He can improve his hand usage, as we’ll get into shortly. Still, he’s not aimless in his intent, and his hands no doubt have forceful capacity. Kinnard flashes ability and energy with his hand technique, and when he gets clean contact, his natural power shines through.

Kinnard’s athletic profile alone would have generated plenty of interest on the 2021 NFL Draft circuit. However, when we look back in 2022, returning to school will likely be viewed as a smart decision for him. As strong as his scouting report was in 2021, he does have some work to do if he wants to lock in his status as an early-round contender.

Most notably, Kinnard’s hand usage has plenty of room for improvement. He flashes promising ability with his hands, but he isn’t especially fast or violent on a consistent basis. He can be more proactive, precise, and authoritative with his approach. Furthermore, his hands don’t always strike their targets cleanly. Kinnard’s inconsistent placement can prevent him from channeling his power effectively.

Beyond his hands, Kinnard can improve other facets of his scouting report. He sometimes plays with his pads too high, and although he has a wide frame and imposing length, he can lurch at times and sacrifice balance. He sometimes lacks control with his movements, and his feet can be plodding in lateral motion at times.

Additionally, Kinnard can work on refining his positioning. He sometimes tries to exert power before attaining proper positioning. On the opposite end of the spectrum, he can also overshoot blocking angles at the second level. Kinnard sometimes freezes his feet at the beginning of reps, making him vulnerable against speed rushers.

You won’t often find an offensive tackle of Kinnard’s size who can move the way he can. He’s an exceptional athlete with an excellent combination of short-range explosiveness, urgency, and width. As one would expect with his frame, Kinnard is a powerful blocker with a potentially dominant amalgamation of physical traits.

Having said this, Kinnard — at this point — doesn’t utilize his traits well enough to outright negate rushers with consistency. He has impressive awareness and urgency as a blocker, but he’ll need to improve his hand usage and positioning in 2021. Offensive tackles use their hands and base to channel their physical traits through to their opponents. If a tackle’s base isn’t properly placed or his hands don’t land effectively, those physical traits aren’t used to their maximum potential.

In a way, this makes Kinnard’s NFL Draft scouting report even more exciting. The Kentucky OT has visible athleticism and power on tape. Moreover, he has room to trim some weight and potentially glean even more athleticism from his frame. If he can learn to support his traits better and employ them with increased efficiency, he can be an impact starter at tackle or guard in the NFL.

Kinnard’s size has always been something that’s set him apart. By his senior year in high school, he was around 6’5″ and listed at 336 pounds. That size often alludes to less-than-stellar mobility and explosiveness. Yet, Kinnard broke the mold by registering a 28.5-inch vertical jump in workouts during the recruiting cycle.

With his combined size and athleticism, Kinnard earned a four-star designation from ESPN in the 2018 class. He was ranked as the 25th-best prospect at the offensive tackle position and was also listed as the 14th-best recruit in the state of Ohio. Kinnard received scholarship offers from several Power Five schools, including Pittsburgh, Purdue, Maryland, Iowa State, and Minnesota. However, a chance to play in the SEC ultimately drew Kinnard to play OT at Kentucky.

Kinnard came to Kentucky more physically ready than the average tackle. Therefore, he saw action early in his career. Kinnard played in nine games as a true freshman, starting two at left tackle. It wasn’t much experience for the budding star, but he would ride that window of opportunity to a starting role in the 2019 season.

In 2019, Kinnard shifted over to right tackle and started all 13 games for the Wildcats. Last season, the stalwart blocker reprised his role and started 11 games at right tackle. His play improved a notch in 2020, and he was awarded with first-team All-SEC recognition from Phil Steele and the Associated Press.

All told, Kinnard has played in 33 games, with 26 starts at tackle. As 2021 approaches, he’s set to add to his résumé. And if he plays well enough, his current starting streak might extend into the NFL.