Daniel Jones had an inconsistent rookie season, but he is a great value in later rounds of 2020 fantasy football drafts.

When looking at late-round quarterback values, New York Giants quarterback Daniel Jones stands out as a potential fantasy football league-winner in 2020. With untapped rushing upside and an underrated supporting cast around him, Jones is a steal at his current ranking of 111 overall (QB14) on FleaFlicker.

The majority of people spend too much time overthinking their early-round picks, but one key to season-long fantasy football success lies in the mid-to-late rounds. Finding value starters while others draft their handcuffs is one advantage savvy drafters have over their competition.

In this article, we’ll take a look at Jones’ rookie 2019 campaign while looking ahead to a potential 2020 breakout. We’ll also take a look at his RAS (Relative Athletic Score) entering the 2019 NFL Draft and his CS (Consistency Score) throughout his rookie season.

Jones entered his rookie season as a media whipping-boy after the Giants’ questionable decision to draft the Duke quarterback with the number six overall pick in the 2019 NFL Draft. Despite all the vitriol sent his way, Jones put together a pretty solid rookie campaign.

Jones was one of the most polarizing prospects of the 2019 NFL Draft. Despite being a virtual unknown for the majority of his career at Duke, Jones’ combination of size, arm talent, and athleticism had NFL scouts and general managers in awe. You see his athleticism on full display when looking at his 8.11 RAS (Relative Atheltic Score). 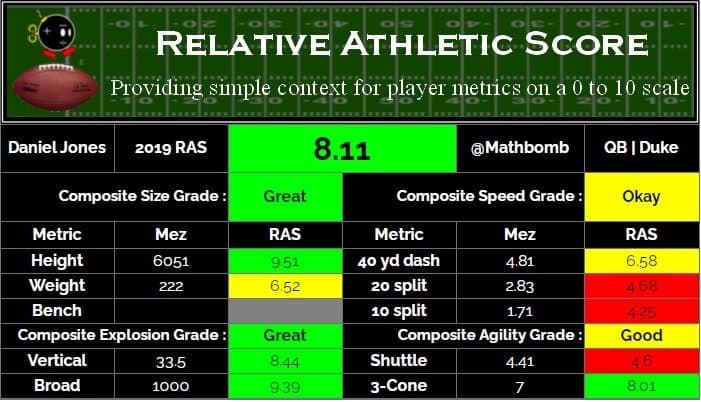 Consistency Score is a metric created by Pro Football Network fantasy football analyst Phillip Caldwell. Consistency Score doesn’t look at overall points scored, but instead looks at how consistent each player is throughout the season. Caldwell says in his Fantasy Football Collection that he set out to find the “one metric that could show you not only who was consistent, but consistently good.”

While Jones’ inconsistency is a good reason to pause, his league-winning upside was on display last season with four contests of 25+ fantasy points. In those four contests, Jones finished the week as QB2, QB1, QB2, and QB1. The downside of his inconsistent rookie-year play: Jones finished with less than 15 fantasy points in his other eight starts.

Despite a better-than-expected rookie season, Jones remains a tremendous value in 2020 fantasy football drafts. The Giants sophomore quarterback is currently being drafted as the QB14 with an ADP of 126.7, according to FantasyPros aggregate PPR rankings.

Those overlooking Jones’ league-winning upside are likely looking at his borderline QB2 finish from Weeks 1-17, instead of looking at his stretch as the starting quarterback. Jones started ten straight games from Weeks 3-13, missed two games to injury, then returned for the final two contests of the Giants season.

In his ten starts from Weeks 3-13, Jones finished as the QB10 in fantasy football above fantasy football stalwarts Matt Ryan, Carson Wentz, and even Patrick Mahomes (albeit in 7.5 games). Once Jones returned to the starting lineup in Week 16, he set the fantasy football world on fire with a 35-point outburst in New York’s overtime victory over Washington. He averaged 25.46 points in the final two weeks of the 2019 regular season en route to a QB3 finish in that span.

The quarterback’s ceiling is capped if he doesn’t improve on his league-leading 18 fumbles (11 fumbles lost) and inconsistent scoring in 2019. Still, Jones offers sneaky rushing-upside that has often been the “Konami Code” for fantasy football success. Last year, he finished with 279 rushing yards and two rushing touchdowns, but look for those numbers to improve in year-two.

So, what happens when one of your fantasy league mates has the same idea and snags Jones before you have the chance to pounce on his 2020 value? For one, don’t panic. You never want to enter a draft with only one plan, so be prepared to pivot to another high-upside late-round quarterback option. Some of my favorites are listed below.

With this amount of quarterback talent available so late, my ideal strategy is to load up on skill-position talent in the first 8-10 rounds. Once I feel comfortable with my depth at the core positions, I’m content with taking the undervalued Jones and one of these remaining quarterbacks in the late rounds.

Nico Collins Waiver Wire Week 14: Will He Continue To Find Success Against Dallas This Week?

Is DJ Chark or Jameson Williams a Waiver Wire Add in Week 14?

Jordan Mason Waiver Wire Week 14: Should You Add Him Against the Buccaneers?