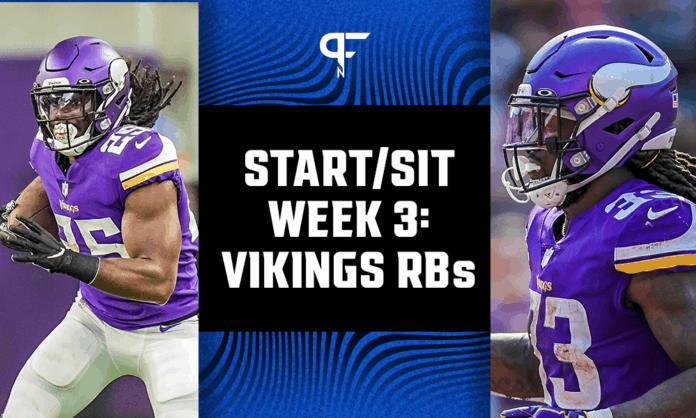 What is the fantasy outlook for Dalvin Cook this week, and should you be looking to start Alexander Mattison in your Week 3 matchup?

By Ben Rolfe
September 26, 2021
What's in this article? Click to show
Dalvin Cook is off to a strong start for fantasy managers
Week 3 is set to be a nice matchup for the Vikings’ run game
Should you start Dalvin Cook or Alexander Mattison in Week 3 fantasy lineups?

Fantasy football managers of Dalvin Cook had their hearts in their mouths last week when Cook headed to the blue medical tent. Now entering Week 3, can you trust Cook in your fantasy lineup after he did not practice throughout the week? Additionally, can you trust Alexander Mattison to carry your fantasy team?

Update 09/26/21: Dalvin Cook will not play in Minnesota’s game against the Seattle Seahawks. He is out with an ankle injury.

Dalvin Cook is off to a strong start for fantasy managers

If you drafted Cook in the first couple of picks, you are unlikely to be disappointed by the return so far. While he hasn’t posted any “huge” games, Cook is still the RB5 in terms of fantasy points per game in half-PPR scoring.

Cook has scored a total of 33.2 fantasy points in half-PPR formats so far this season. He scored 17.4 fantasy points in Week 1, thanks to 6 receptions and a rushing touchdown. Then, in Week 2, he rushed for 131 yards on his way to a 15.8-fantasy-point return. Cook has essentially been exactly what you asked for — a reliable, consistent fantasy option.

However, his injury situation changes that significantly heading into Week 3. It casts a question mark over what we can expect to see from the Vikings RB. Early Sunday morning, Ian Rapoport reported that it is no sure thing Cook plays, and he will be limited if he does, while Adam Schefter reported that it is “unlikely” we see Cook on the field in Week 3.

No defense has been worse in terms of fantasy points allowed to the RB position than the Seahawks. Through two weeks, they’ve allowed an average of 42.7 fantasy points per game to the position. That includes 3 touchdowns, 275 rushing yards, and 189 receiving yards on 21 receptions.

Derrick Henry accounted for much of that production on the ground, but the Colts’ backs also had success in the passing game in Week 1. This game could be the perfect opportunity for a big fantasy return from Cook.

Should you start Dalvin Cook or Alexander Mattison in Week 3 fantasy lineups?

It is tough to sit Cook in fantasy leagues. He is simply too talented, and the matchup is too intriguing. However, there is a big risk in starting a player who did not practice all week and whose game does not start until the 4 PM window.

If Cook suffers a setback or is ruled out before the game starts, then you potentially have limited options to turn to. Equally, if Cook plays one series, aggregates the injury, and is not seen again, then the return is likely to be very low. However, injuries are a part of fantasy football, and they can happen to anyone at any time — just ask the Christian McCaffrey fantasy manager.

Assuming we hear nothing regarding Cook before the 1 PM kickoff window, you have to assume he is playing. However, a limited back is hard to start. Without other significant options, it will be hard to sit Cook. Yet, it might be the prudent thing to do this week.

Cook’s potential presence also limits the upside for backup Vikings RB Mattison. When previously given significant opportunities, Mattison has flashed his potential. In fact, he had 112 rushing yards and 24 receiving yards in a matchup with the Seahawks last year. He also had 145 total yards and 2 touchdowns in Week 17 against the Lions.

Unless you have slam-dunk must-start backs on your team, Mattison has the upside to be a real contributor for you in Week 3.