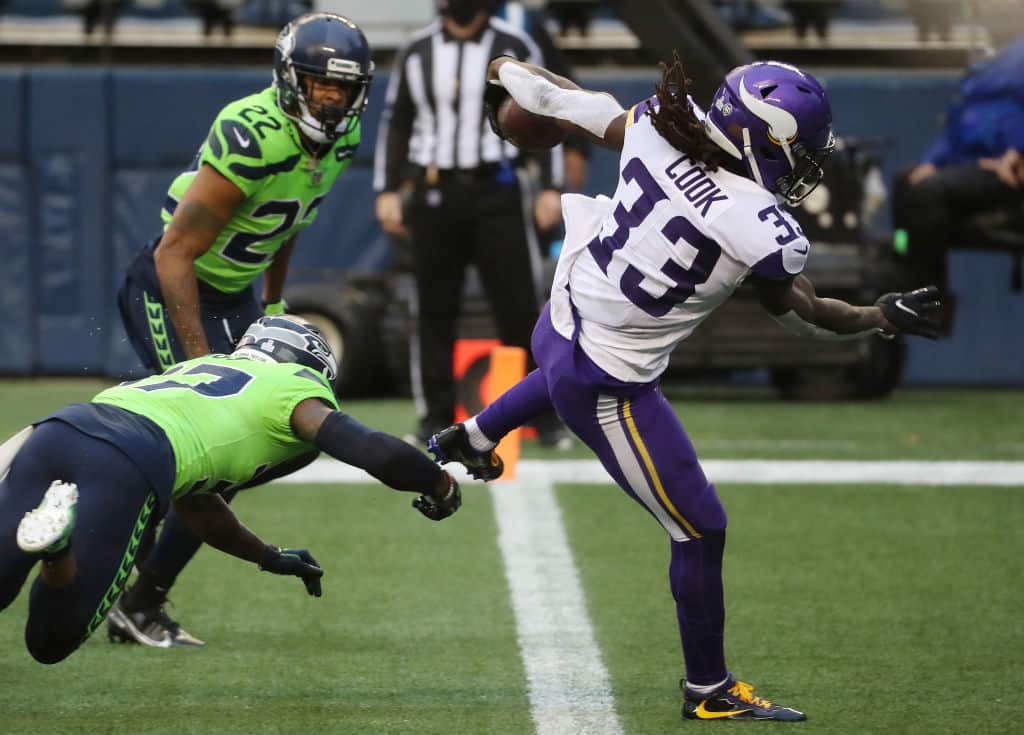 SEATTLE, WASHINGTON - OCTOBER 11: Dalvin Cook #33 of the Minnesota Vikings scores a touchdown against Quandre Diggs #37 of the Seattle Seahawks during the first quarter at CenturyLink Field on October 11, 2020 in Seattle, Washington. (Photo by Abbie Parr/Getty Images)
What's in this article? Click to show
Dalvin Cook suffers groin injury in Week 5
Alexander Mattison and Mike Boone’s Fantasy Analytics
With Dalvin Cook out, Alexander Mattison is likely to lead the backfield in Week 6
More fantasy football coverage at Pro Football Network

After being forced out of Minnesota’s brutal 27-26 defeat to the Seattle Seahawks, Vikings star running back Dalvin Cook will sit through Minnesota’s bye week after reportedly suffering an abductor strain in his groin. And when it comes to fantasy football, the big question now revolves around backup running backs Alexander Mattison and Mike Boone. Can they help your fantasy teams in Week 6?

The Vikings will face off against the 0-5 Atlanta Falcons in Week 6, followed by their bye week. With Cook mostly expected to return in Week 8, fantasy players must weigh the risk/reward of using their No. 1 waiver priority on a potential stop-gap option. If you’re in win-now mode and need victories in the worst way, Alexander Mattison can help get you over the hump in Week 6. But if you’re comfortable with your team and building for a championship, should you consider a better long-term option on the waiver wire this week?

After racking up 89 total yards in more than two quarters against Seattle, Vikings running back Dalvin Cook missed most of the second half with a groin injury. Cook reportedly avoided significant damage to his groin, but the running back is out until at least Week 8’s contest with the AFC North rival Green Bay Packers.

With an upcoming matchup with the hapless Falcons followed by an off week, it made perfect sense for Minnesota to hold Cook out until he’s fully healthy and ready to absorb the punishment he is used to. Cook has an extensive injury history that includes injuries to his ACL, labrum, hamstring, and A/C joint.

Even if he doesn’t have a history of groin injuries, Cook’s injury history adds another wrinkle into the equation. While it looks like both Mattison and Boone will be stop-gap options for Week 6 only, both could be longer-season options if this lingers or the running back suffers another injury.

After those two games, the Vikings face the Lions (last in rush defense), at Chicago (16th), and have home contests with the Cowboys (27th), Panthers (25th), and Jaguars (26th). Whoever emerges from this Vikings RB committee will be a premier option in fantasy leagues.

However, in fairness, the Vikings run into the staunchest run defense in the NFL at the current moment (Tampa Bay Buccaneers) at the beginning of the fantasy playoffs and face the 6th toughest run defense in the de facto fantasy championship vs. the New Orleans Saints (unless you are one of those oddballs that run your season all the way through Week 17).

Some of the best data available here at Pro Football Network can be found in our football analytics section. These include our Consistency Score, Expected Fantasy Points, RAS, and Offensive Value Metric.

Consistency Score is a metric created by PFN’s Phillip Caldwell that relies on touches and fantasy success, so it’s hard to gather much from that data. Alexander Mattison and Mike Boone have received enough volume for respectable scores. Still, one look at Dalvin Cook’s Consistency Score shows what running backs are capable of in Minnesota’s offense. Cook currently has a 12.48 CS in 2020, good enough for RB2 behind only Christian McCaffrey.

RAS or Relative Athletic Score is a pre-draft metric created by PFN’s Kent Lee Platte that looks at how athletic prospects are compared to those drafted before them. Alexander Mattison has a respectable RAS score of 6.85, but Mike Boone’s 9.11 RAS is one of the better running back scores in recent drafts.

The PFN Offensive Value Metric measures how much of a player’s statistical production they were actually responsible for. So far this season, Mattison’s 9.39 OVM is good enough for RB22 on the season. With running backs needing ten rushing attempts per game/20 rushing attempts on the season to qualify, Mike Boone doesn’t have an OVM score in 2020, but he was elite when given his opportunity in 2019. Twice in 2019 (Weeks 15 and 17), Mike Boone finished with a score above 25 in PFN’s Offensive Value Metric.

With Dalvin Cook out, Alexander Mattison is likely to lead the backfield in Week 6

Once Dalvin Cook was lost to injury, backup running back Alexander Mattison dominated the running back snaps in Week 5. Mattison, a former Boise State standout drafted in the third round of the 2019 NFL Draft, paced Minnesota with 112 rushing yards against Seattle.

Fellow backup running back Mike Boone is probably the most-talented third-string running back in the NFL, but if Week 5 is any indication, this backfield is Mattison’s until Cook returns. Mattison handled 43 snaps (49%) compared to 5 snaps (6%) for Boone, while out-touching the third-stringer 23-2 in Week 5.

While it makes sense for Minnesota to split the workload between the two talented backs, Week 5’s usage has Mattison as the clear lead-dog heading into Week 6 against Atlanta. With the Falcons defense traditionally one of the worse against opposing running backs, Mattison is in a tremendous position to explode onto the fantasy football scene in Week 6.

Running backs have feasted on the Falcons porous defense in 2020, with lead-backs averaging 21.24 PPR points against Atlanta this season. Besides David Montgomery’s below-average Week 3 (7.4 fantasy points, RB41), the Falcons defense has allowed RB1 numbers to every other back they’ve faced this season. Chris Carson (RB7), Ezekiel Elliott (RB7), Aaron Jones (RB7), and Mike Davis (RB1) all finished as high-end RB1’s against Atlanta.

If you have Mattison in your dynasty or deeper re-draft leagues, you should feel comfortable sliding Minnesota’s new starting running back into your starting lineup. If you consider making a claim on the waiver wire, do so with confidence that Mattison will lead this Vikings backfield in Week 6. Just know the pickup isn’t likely to be a long-term fix, with Dalvin Cook expected back in only a few weeks.