Is Dak Prescott’s contract really worth all of the drama in 2020?

With the July 15th deadline passing for a contract deal, Dak Prescott finds himself once again without a firm agreement with the Cowboys in 2020.

The deadline for the Dallas Cowboys and Dak Prescott to reach a contract agreement has come and gone — again. After failing to get a new contract signed in 2019, Cowboys fans, players, and NFL experts alike all expected the Dallas front office and quarterback Dak Prescott to come to terms this offseason.

However, with the July 15th deadline passing with no contract in sight, there is now a lot of new uncertainty with the superstar QB for 2020. So with all of the apparent headache surrounding the deal, is Dak Prescott’s contract situation really worth all of the drama?

If it feels like the discussion about Prescott’s contract has been going on forever, it’s because it has been. Football fans and pundits quickly realized the potential of Prescott after he replaced Tony Romo on the Cowboys roster back in 2016. Since then, he has created a place for himself as a cornerstone of the Dallas offense. It seems everyone knew that a big contract offer was coming.

And an offer did come in 2019 — just not an offer that was suitable for Prescott and his camp. Prescott, who is now a two-time Pro Bowl quarterback, has stated repeatedly that he wants to play on a four-year deal. However, the Cowboys front office has a different plan in mind.

The sides have vied for leverage in negotiations over the last year but they just can’t seem to see eye-to-eye. Their latest offer to Prescott, presented back in March, was a five-year contract capping out at $110 million. No deal. So, for now, Prescott will be playing for the Cowboys over the course of the 2020 regular season under the one-year franchise tag.

He is definitely going to make some money this year, making over $30 million. But Prescott will still be looking for that right contract, whether it’s with the Cowboys or not.

It’s not very clear why the Cowboys are having such a hard time meeting Prescott’s demands. Is it possible that they just don’t think he’s worth his self-determined price? A dive into Prescott’s individual production value that he brings to his offense can help shed some light on just how good the quarterback is and if he is really worth the money.

Over the last three seasons, Prescott’s individual production while on the playing field has been fairly consistent. For the 2017, 2018, and 2019 regular NFL seasons, Prescott’s OSM overall season grades have been a 24.63, 23.29, and 29.33 respectively.

The OSM, or Offensive Share Metric, is a grading system used to illustrate a player’s on-field individual production value by focusing solely on qualities that are directly in his own control. An OSM grade in the 20’s considered a Good grade for quarterbacks on the grading scale. The best NFL quarterbacks usually score around the 30.00 mark. 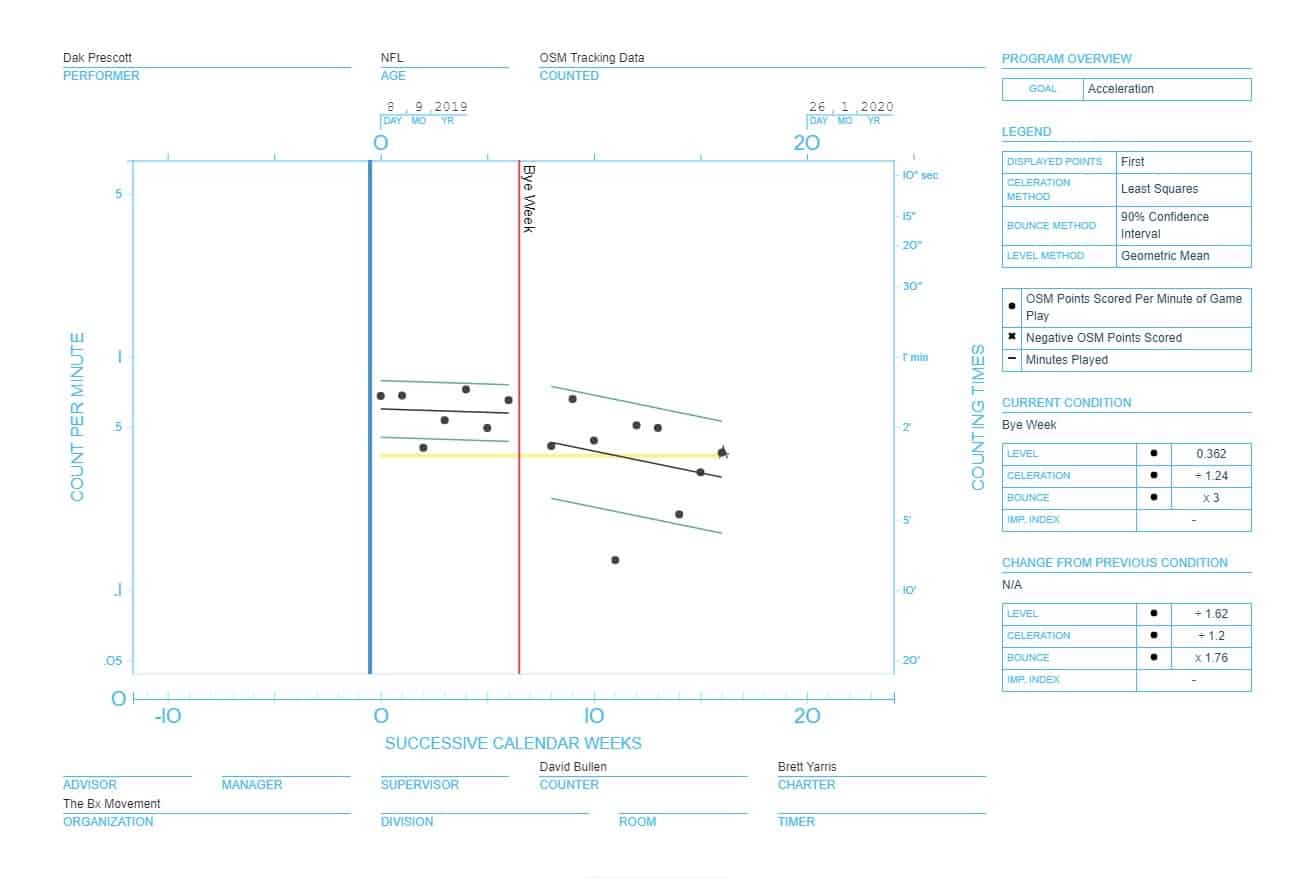 Prescott stood out during the 2019 season

His week-to-week grades last season were impressive. Prescott had three games where he ended the day with an OSM grade of 40.00 or better, a feat considered Elite for QB production grades. Out of the 17 total games that he participated in last season, his individual production was ranked top 10 among all NFL quarterbacks in ten different weeks.

Prescott was exceptionally good using his arm to get the ball down the field last season. His average 7.6 yards of Completed Air Yardage was the third highest in the NFL for 2019. That high completion average can be attributed in part to Prescott’s impressive pass accuracy.

Prescott was ranked 14th overall in the NFL last year for completion percentage, completing 65.1% of all his pass attempts, with 30 of those attempts resulting in a touchdown, the fourth-highest number of touchdowns for a quarterback in 2019.

If you’re looking for someone to blame for an 8-8 record, it’s always easiest to go immediately to the quarterback. But, without a doubt, Prescott did his part in 2019. Not only did he execute at a high level using the tools that he had at his availability, but he did so at a higher barometer than almost every other NFL quarterback last year.

Here are the facts: Dak Prescott is a top NFL quarterback right now. He wants to be paid like a top NFL quarterback. For comparison, Jared Goff, from Prescott’s same 2016 draft class, ranked as QB33 on the OSM metrics last year (28 places behind Prescott) and still managed to snag a $110 million, four-year contract with the Rams — a similar agreement to what Prescott has been asking for.

For whatever reason, a business decision has been made by the Cowboys front office to not lock in Prescott for the franchise’s near future. There’s clearly some hangup that the decision making folks in Dallas have on Prescott, be it personality conflicts or genuine salary cap restrictions, but the ball was definitely dropped here.

So was Prescott’s contract really worth all of this attention over the last year? If you’re Prescott, absolutely. He’s playing at a top-tier skill level right now, putting the offense on his back in most weeks, and deserves the payday.

If you’re the Cowboys, not a chance. After Prescott’s 2019 performance, and already not closing the deal once before, there’s no way he shouldn’t be in a new contract right now.

The truth of the matter is that someone is going to pay Prescott. The prospect of that being Dallas isn’t looking good (and at this point, Prescott may be tired of waiting for them too). There are already rumors circulating about other franchises, such as the Minnesota Vikings and the Washington football team, prepared to pay Prescott whatever he wants. He’s definitely going to playing under a shiny, new contract sooner than later. It’s only a matter of time.

Thoughts on this feature? Something you would like to see during the offseason? Follow us on Twitter or join in on the conversation on Facebook. You can also check out my other articles from 2019 and 2020 here.