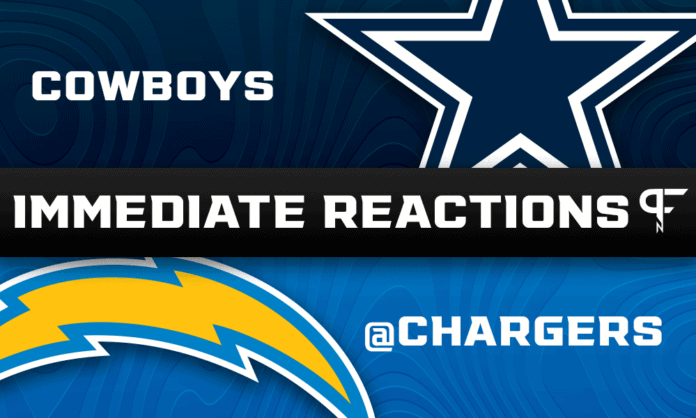 The Cowboys vs. Chargers was a surprising defensive battle. Here are the highlights and final score from the afternoon matchup.

Observations from the Cowboys vs. Chargers game

What were the score and highlights from the Cowboys vs. Chargers matchup in SoFi Stadium in Week 2?

Build up to an offensive showdown

There were several reasons to believe this game was going to be an offensive showdown. To begin with, the Dallas Cowboys are coming into the season with an abysmal defense from 2020. They lost a key piece in Demarcus Lawrence before this one even started, and they let up 30 points in Week 1 to the Tampa Bay Buccaneers.

That was all music to Justin Herbert’s ears. With 300 passing yards, he would register 10 career 300-yard performances, tying AFC West rival Patrick Mahomes and Dan Marino for the most by an NFL player through the first two seasons of a career. Herbert also needed just 327 passing yards to reach 5,000 for his career. He would join Mahomes (5,381) as the only two players to top 5,000 yards in the first 17 starts of a career.

So, was Herbert able to pass that 300-yard milestone?

The Cowboys try to limit Herbert in the first half

The Cowboys started the game exactly how they needed to, keeping the ball out of Herbert’s hands for as long as they could. Dallas marched down the field and into the end zone for a 7-minute, 15-play drive. It was the first time the team scored on their opening drive in the last 21 games.

Dallas clearly knew where their advantage was, and it was with the run game. Both Tony Pollard and Ezekiel Elliott rushed with ease against the Chargers’ defense. Elliott rushed 16 times for 71 yards and 1 touchdown. However, Pollard was the real standout here, compiling 109 yards and another TD.

The Chargers move up and down the field

As much as Dallas wanted to keep the ball out of Herbert’s hands, it just wasn’t possible. Every time the Chargers got the ball, Herbert completed chunk plays. He had 161 yards passing at the half.

In the second quarter, he completed 15 straight pass attempts. However, penalties hurt the Chargers, with 10 flags in the second quarter alone. That, combined with their special-teams issues, gave the Cowboys a 14-11 lead heading into halftime. Interestingly enough, this was the first time in the history of the NFL that a game finished 14-11 at the half.

The #Cowboys and #Chargers head to halftime with Dallas leading 14-11.

Did you know this is the first time in NFL history that this is the score at halftime? pic.twitter.com/ag3lpb8ugM

Coming out of the half, both teams continued to move the ball downfield. Herbert connected with Keenan Allen early in the third quarter for a big play. Allen had 108 receiving yards, passing Gary Garrison (7,533) for the fourth-most receiving yards in team history.

One thing that most Cowboy fans were probably not expecting in this game was turnovers. But that is exactly what they got in this game. They managed to intercept Herbert twice, the most important of which came in the end zone late in the third quarter.

Even with the turnovers, Herbert still managed to have over 300 passing yards. However, it wasn’t enough. Dallas had the ball last, and even though they completely mismanaged the clock in their final drive, Greg Zuerlein still gave them the win with a 56-yard field goal.

Even though the Cowboys got the win, there were still some concerning elements of this game. The defense continues to be an issue, allowing the Chargers to average 6.6 yards per play. If it had not been for some timely/questionable penalties, this final score could have been completely different.

Dak Prescott only threw for 237 yards without a TD and an interception. It was that he played poorly, the team simply did not need to rely on him with how effective the run game was.

Looking ahead to Week 3

The Cowboys get an extra day of rest before they take on the Philadelphia Eagles next Monday night. Jalen Hurts and the offense as a whole did not look good in Week 2 against the San Francisco 49ers. A Dallas defense could be just what the doctor ordered.

Meanwhile, the Chargers have to head to Kansas City to take on the Chiefs. This defense will now be tested again with Patrick Mahomes on the other side of the ball.