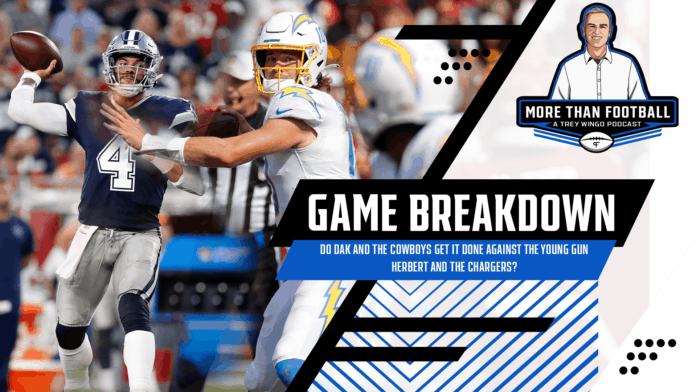 PFN's Chief NFL Analyst Trey Wingo previews the matchup between the Cowboys and the Chargers on the More Than Football podcast.

By Lucas Ellinas
September 19, 2021
What's in this article? Click to show
Chargers rookie Rashawn Slater had a standout performance in Week 1
Dallas is missing a couple of key players
These two teams have opposite trajectories

After a tough loss to the Tampa Bay Buccaneers in the season’s opening game, the Dallas Cowboys are on the road to face the Los Angeles Chargers. On this week’s episode of the More Than Football Podcast, PFN’s Chief NFL Analyst Trey Wingo, along with host Brett Yarris, preview the Cowboys at Chargers matchup.

Chargers rookie Rashawn Slater had a standout performance in Week 1

When talking about the Chargers’ performance in Week 1, Wingo and Yarris quickly pointed out the play of rookie left tackle Rashawn Slater. According to someone Wingo knows in the Chargers organization, Slater “did a hell of a job, that’s exactly why we took him where we took him.”

Wingo agrees with that sentiment, suggesting that he was as impressed with Slater as he was with any other rookie in Week 1.

Dallas is missing a couple of key players

There is less positive news on the Cowboys side of this matchup. They have serious problems thanks to absences on both sides of the ball. First, there is the suspension of right tackle La’el Collins for violating the NFL’s substance abuse policy.

That means Chargers star Joey Bosa will be going against a backup. And while Wingo thinks Dak Prescott will still have an excellent game, that is not a matchup you feel good about if you are Dallas.

On the opposite side of the ball, defensive end DeMarcus Lawrence will miss significant time with a broken foot. Wingo believes he is “the most impactful defensive player for the Dallas Cowboys.”

To compensate, Wingo suggests that linebacker Micah Parsons will need to have a great game. However, it’s unlikely that he can make up for the loss of such a crucial player.

These two teams have opposite trajectories

Ultimately, Wingo believes that this game is a case of one team heading in the right direction, with a promising rookie and improving quarterback, and another still trying to figure out who they are. “That is a recipe for disaster.”