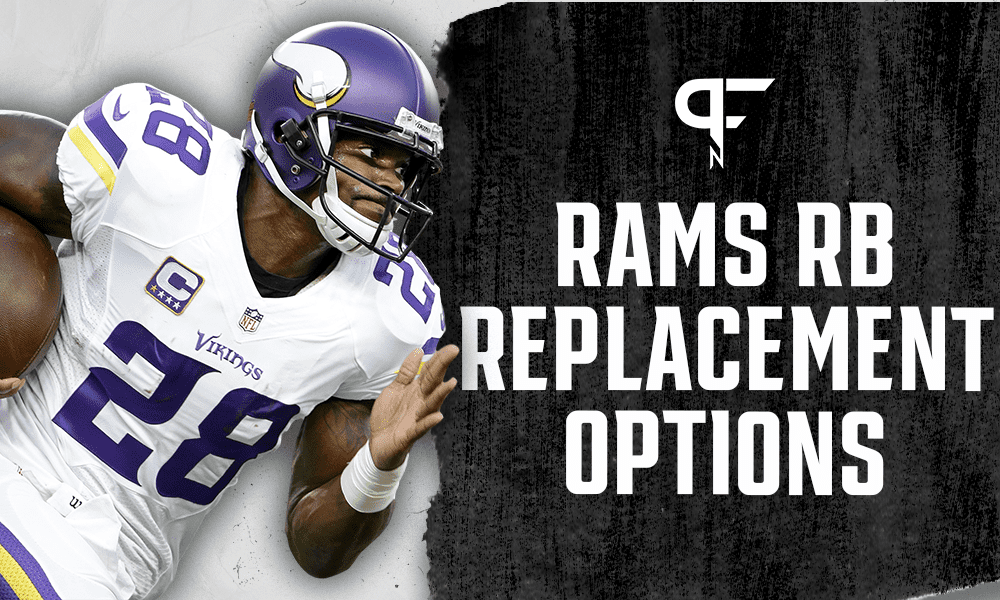 Could the Rams add Adrian Peterson or Todd Gurley to replace Cam Akers?

The news that running back Cam Akers suffered a torn Achilles’ tendon while training came as a gut punch to Los Angeles Rams fans and employees alike. Could the Rams look to add someone like Le’Veon Bell, Todd Gurley, or Adrian Peterson amongst others, to potentially replace Akers?

Akers was in line for a massive Year 2 as L.A.’s lead back. Now, the Rams are left scrambling to ID a new No. 1 just days before the start of training camp. Internal options include Darrell Henderson, Raymond Calais, and Jake Funk, and they’ll surely get a chance to step up in the coming weeks. But if they don’t pan out, it would be professional malpractice for the Rams not to also look outside their building for a replacement.

The NFL’s fifth-leading rusher wants to return for Year 15, and we hear he’s among the names the Rams are considering. Peterson appeared recently on Sports Talk 790 AM, telling the station: “My body feels strong. I still feel young. I still feel good. I’m ready to play ball.”

Peterson added that he emerged healthy from the 2020 season, which he spent with the Detroit Lions, and that his training is going well. He rushed for 604 yards and 7 touchdowns in 2020.

Should he sign with the Rams, Peterson would play for his sixth team in the past seven seasons. Even at age 35 last fall, he showed an ability to get to the second level.

What’s left in the tank? That’s the question Les Snead’s probably asking right now about Gurley, who averaged 3.8 and 3.5 yards per carry in 2019 and 2020, respectively.

Gurley hasn’t been the same back since suffering a still-mysterious knee injury late in the 2018 season during his first (and probably only) go-round with the Rams. Still just 26 years old, Gurley started 15 games for the Atlanta Falcons in 2020 after signing a one-year, low-risk deal. However, he didn’t show enough for Atlanta to bring him back for another season at presumably an even lower price.

The two-time All-Pro is still on the right side of 30 and has been keeping in what appears to be great shape, based on social media posts. He’s been training in South Florida, awaiting an opportunity.

One with a contender might have just presented itself. Bell, who is just shy of 10,000 yards from scrimmage in his career, is still in pursuit of a ring after falling short in the Super Bowl with the Kansas City Chiefs in February.

Player to be named later

There’s also a chance the Rams simply wait for next month’s cut-down deadline and either claim a player off waivers or trade for one to ensure he never gets there. Los Angeles is 25th in the waiver order, so hoping for the former would be a big-time gamble.

The Saints, Browns, and Colts are among the deepest running back teams in the league. It makes sense for the Rams to target one of their backups if they aren’t blown away by the guys on their roster.

If the Rams want to address the position immediately but don’t have interest in the aforementioned available names, other street free agents include T.J. Yeldon, Dion Lewis, LeSean McCoy, and Frank Gore.