The college football Week 1 schedule has been significantly slimmed down due to postponements and cancellations. However, that doesn’t stop the scouting process.  Here’s a primer on who to watch this weekend during games which will be televised nationally.

The player to keep an eye on during this ESPN telecast is Marshall left tackle Josh Ball.  Presently graded on my board as a fourth-round prospect, there are many scouts who feel Ball has the talent to end up as a day two selection.

Coming to Marshall by way of Butler College after leaving Florida State at the completion of his freshman season, Ball is a large, athletic blocker effective in all facets of blocking.

There are some character issues scouts will investigate in the lead up to the draft, but Ball has a large upside and should dominate against the lower level of competitors EKU will field.

Thomas is a safety-sized linebacker with terrific speed and the ability to cover a lot of area on the field.  He’s outstanding in pursuit but struggles to disengage his 218-pound frame from blocks.  The ability to quickly read and diagnose plays will be key for Thomas, who best not bite on ball fakes or get caught out of position.

The decision to opt-out this season by Memphis running back Kenneth Gainwell takes a bit of shine from this game, yet the return of ASU defensive lineman Forrest Merrill is highly anticipated.

Merrill started five games last season and was very effective before being lost to injury for the rest of the year.  He’s a tough, slug it out defender with a non-stop motor.

While I stamped Merrill as a sixth-round prospect, there are some scouts who feel he’s worthy of a fourth-round grade. 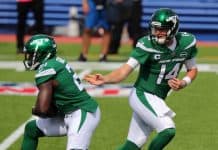