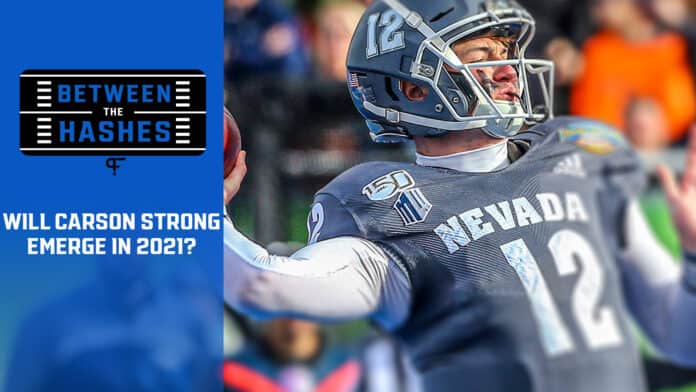 College Football News: Will Carson Strong emerge as a top QB in the 2022 NFL Draft?

Between the Hashes returns to break down the latest college football news and touches on Carson Strong's rising NFL Draft stock.

By Cam Mellor
August 20, 2021
What's in this article? Click to show
College Football News and Notes
Can Carson Strong be that next riser?
The schematic downside to Strong

The latest episode of Pro Football Network’s Between the Hashes Podcast touches on the lead-up to the college football season and breaks down the latest college football news and notes. PFN’s Chief Draft Analyst and NFL Insider Tony Pauline and Draft Analyst Cam Mellor also look at some players whose stock is climbing, including QB Carson Strong.

Note: To watch this episode of Between the Hashes, tune in to the video player above. You can also watch on the PFN YouTube Channel or listen on your favorite podcast platform, including Apple Podcasts and Spotify.

The nation will be locked into actual, meaningful football next weekend when college football returns. That means the country will be anxiously awaiting the next Joe Burrow or Zach Wilson meteoric rise from a quarterback.

After Burrow rose to fame and ultimately won a national championship and Heisman Trophy, Wilson put himself into the Heisman discussion and had BYU as the talk of the college football landscape in 2020. Both quarterbacks rose from relative obscurity in the nation’s eyes to become their season’s most polarizing player. Then, they were selected first and second, respectively, in back-to-back NFL Drafts.

As such, the hunt is on for “the next Joe Burrow or Zach Wilson” as the college season nears.

Can Carson Strong be that next riser?

On the latest episode of Between the Hashes with Tony Pauline and Cam Mellor, Pauline discussed what he has already seen from Nevada QB Carson Strong.

“What will happen is the people who don’t cover the draft after the Super Bowl or maybe people whose team starts 0-7 come the middle of October may start to latch on to Carson Strong. But get to know this guy.

“I did a mock first round, and I have Carson Strong in my top 15. I don’t know if he goes top 15, but he’s got that potential. He is a big, strong, mobile pocket passer. He has one of the strongest arms of any quarterback I’ve scouted in probably the last 15-20 years.

“He slings it downfield with ease. His deep passes have great speed. He can make all the passes. He challenges the vertical game and has a lot of upside.”

With a glowing recommendation like that, it’s no wonder why Between the Hashes spoke so fondly of Strong. But if that’s the general consensus, why is there no one else talking about Strong?

The schematic downside to Strong

Strong’s geographic location may also play a factor if ‘analysts‘ are dependent on East Coast time zones. But again, that’s just being lazy. Once you see Strong’s tape, you’d be sold.

So what is the largest discrepancy between the general outlook on Strong and his play on the field that does leave some concern? Pauline discussed this specifically on Between the Hashes:

“I think the offense they play at Nevada is kind of to his detriment in the sense that they play a lot of Pistol formations. They get a little too cute for themselves.”

“Go back to that first game of 2019 against Wyoming. They were up 24-0, they’re down in the red zone with a chance to put the game away. They line up their running back behind center. Four downs in a row, they don’t get in the end zone. Wyoming comes storming back, and Nevada has to pull the game out at the end.”

Strong’s areas of improvement are all coachable

The best part about what Pauline said about Strong above is that all of that is coachable, especially when NFL coaches do the coaching.

To watch this episode of Between the Hashes, tune in to the video player above. You can also watch on the PFN YouTube Channel or listen on your favorite podcast platform, including Apple Podcasts and Spotify.