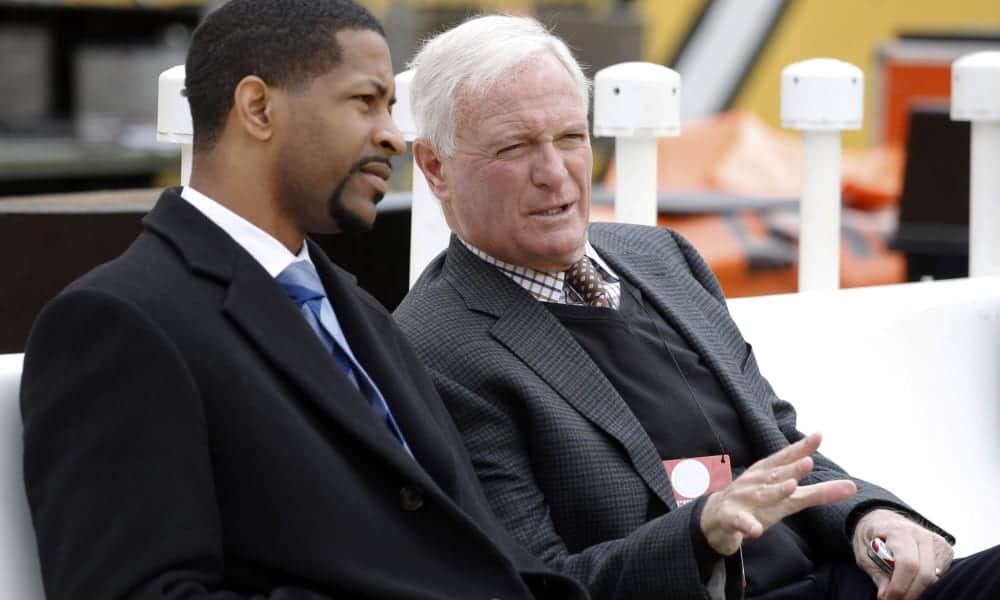 With the Cleveland Browns conducting yet another head coach and general manager search, numerous candidates have been publicly and privately named for both positions. This includes the likes of Josh McDaniels, Eric Bieniemy, Mike McCarthy, Robert Saleh, Kevin Stefanski, and others.

With the Haslams appointing chief strategy officer Paul DePodesta to lead the coaching search, PFN Insiders Tony Pauline and Ben Allbright have received some clarity on the direction of the search based on sources they’ve spoken to. Through those conversations, they have learned of several HC/GM pairings who have risen to the top of the list.

Note: This article was originally published on January 2 and at that time, the two leading candidates were Josh McDaniels and Kevin Stefanski. Since then, San Francisco 49ers defensive coordinator Robert Saleh and Buffalo Bills offensive coordinator Brian Daboll have also emerged. This update reflects that.

January 11 Update: With all of the chatter around the Browns looking into numerous GM candidates, Allbright reports that this is just a simple case of them doing their due diligence on all of the HC candidates’ preferred GM choices.

And while Allbright has heard that the Browns have a clear list of top candidates, Pauline has heard from a source that when it’s all said and done, their ranked list of HC candidates may not matter.

That’s because according to Pauline’s source, no one in the building truly knows how it will shake out. The source pointed towards owner Jimmy Haslam’s erratic behavior, noting that he is “very much a fly by the seat of his pants type of guy.”

Sources tell Pauline that Philadelphia Eagles vice president of football operations Andrew Berry is one of the names at the top of the list for the general manager position. For this to happen though, Allbright reports that Minnesota Vikings offensive coordinator Kevin Stefanski would need to be hired as the head coach first.

That’s because owner Jimmy Haslam said that the team will first hire the head coach and then the general manager, who will come from outside the organization. He added that the coach and the GM would both report to ownership as equals.

Berry formerly served as vice president of player personnel for the Browns from 2016-18. If Berry does get the job, this would be the second big loss for the Eagles front office in just seven months as Joe Douglas left the franchise to become the general manager of the New York Jets in May.

It’s worth noting that previously, DePodesta had wanted to hire Stefanski instead of Freddie Kitchens, but as we know, Haslam went in another direction. It’s also worth noting that the Haslams hold Berry in very high regard dating back to his time with the Browns.

As Allbright has previously reported here at PFN, co-owner Dee Haslam seems to prefer McDaniels as the next head coach of the Browns. In fact, an external report earlier this week seemed to suggest that the Haslams may offer full control of the organization to McDaniels. While we can’t confirm that report, it would certainly raise some eyebrows if it continues to pick up steam.

Of course, McDaniels’ credentials are well known. He would come with a reputation of success as an offensive coordinator in New England, and he has plenty of diamonds to show for it. His head coaching resume is a bit more questionable, with his first head coaching stint in Denver ending poorly, and then the complete u-turn that he pulled on the Indianapolis Colts just a couple of seasons ago.

If McDaniels were to be named head coach, Allbright says to watch Dave Ziegler, the Patriots Pro Scouting Director. Ziegler began his career in the NFL with McDaniels in Denver back in 2010. He’s known for his attention to detail and has been praised for uniquely understanding a player’s strengths and weaknesses.

It also doesn’t hurt that both Ziegler and McDaniels were born in Tallmadge and Barberton, respectively. Both Ohio towns are approximately 45 minutes away from Cleveland.

Back on January 8th, PFN’s sources indicated that Robert Saleh was being considered as a dark horse candidate for the Browns’ head coaching position. Saleh has been the defensive coordinator for the San Francisco 49ers since 2017. This past year, Saleh led the NFL’s second-best defense in terms of yards allowed (4,509). The 49ers’ stout defense helped pave a path to the NFC’s top seed.

Saleh might not be as much as unlikely as previously thought, with NFL Network’s Tom Pelissero reporting that Cleveland reached out and requested permission to interview with Indianapolis Colts assistant general manager Ed Dodds.

According to NFL Network’s Ian Rapoport, Saleh would be interested in Dodds as a potential general manager if he were to be hired as a head coach. With the request to interview being made, it is safe to assume that Saleh is one of the candidates they are seriously considering.

Dodds worked with Saleh in Seattle from 2011-2013 when Saleh served as the defensive quality control coach. Dodds would spend 10 seasons in Seattle before moving to Indianapolis to be with Colts GM Chris Ballard.

A name that seemingly came out of nowhere is Buffalo Bills’ offensive coordinator Brian Daboll. According to ESPN, Daboll interviewed last week and had a strong performance.

“I’ve been told Daboll is exceptionally prepared and clear about his vision when he has interviewed for previous roles,” said ESPN’s Dianna Russini on Twitter.

Not surprised by this at all. I’ve been told Daboll is exceptionally prepared and clear about his vision when he has interviewed for previous roles. https://t.co/J4Jk3xvVfy

One of the reasons Daboll is being strongly considered is because of his work with Bills quarterback Josh Allen. After completing just 52.8 percent of his passes for 2,074 yards and 10 touchdowns against 12 interceptions as a rookie, Allen saw significant increases in passing production in his second year under Daboll.

Of course, Cleveland has a young quarterback in Baker Mayfield who needs to be developed, especially after he seemingly regressed in his second season. Daboll also has prior history in Cleveland, where he served as offensive coordinator in 2009 under head coach Eric Mangini.

If Daboll does, in fact, get the head coach position, Bills assistant GM Joe Schoen is reportedly being considered to come on as Cleveland’s GM. The pair from Buffalo have spent the last two years together and helped lead the Buffalo Bills to a playoff appearance in 2019.

For more news on head coaches, coordinators, and general manager interviews, be sure to follow our 2020 NFL Interview Tracker. We will continue to monitor the situation and update as more news becomes available.

For more CFB/NFL news and rumors, follow Allbright on Twitter: @AllbrightNFL along with Pauline: @TonyPauline and Pro Football Network: @PFN365.