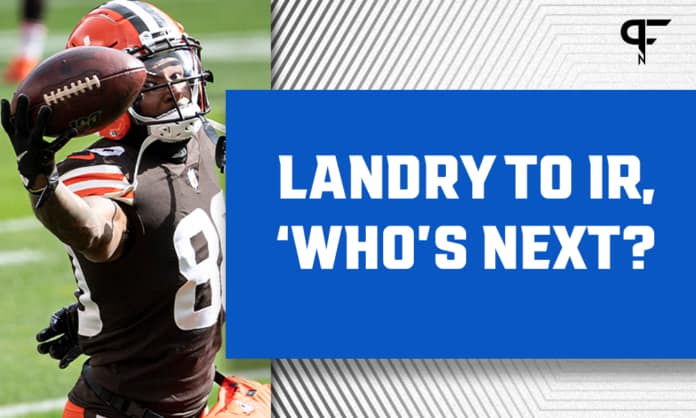 Cleveland Browns Depth Chart: Where to turn at WR with Jarvis Landry on IR

The Cleveland Browns placed WR Jarvis Landry on the IR, meaning he'll miss at least three games. Who's next up on the Browns depth chart?

By Cam Mellor
September 21, 2021
What's in this article? Click to show
Jarvis Landry exits game vs. Houston
How is Cleveland’s WR corps affected with Landry on IR?
Who will replace Landry for the short term?
The Browns are still a playoff team

The Cleveland Browns have lost starting wide receiver Jarvis Landry to injured reserve. This news is fresh on the heels of a sprained MCL Landry sustained in a victory against the Houston Texans in Week 2. With Odell Beckham Jr. also nursing an injury, the top two targets on Cleveland’s depth chart are in question for the remaining games in the 2021 season.

With Landry sidelined for at least three weeks, a massive hole has appeared at wide receiver for the Browns. Where do they turn?

Landry started the game with 1 reception for 9 yards. On the second play of the contest, he came up lame and exited the field. Despite winning the battle on the scoreboard, the Browns may have lost the war as Landry has officially been diagnosed with a sprained MCL.

On Tuesday, he was placed on injured reserve and will subsequently miss at least three games. This comes as the Browns are already without the services of star WR Beckham Jr. The timetable for his return is still up in the air.

With Landry missing, the Browns were forced to turn elsewhere on the receiving end of Baker Mayfield’s passes. Tight end Austin Hooper led all Cleveland pass catchers in targets with 5. TE Harrison Bryant was second with 4, while TE David Njoku finished third with 3. No wide receiver had more than 2 targets in Week 2.

How is Cleveland’s WR corps affected with Landry on IR?

It’s important to note that since head coach Kevin Stefanski took over the Browns, Mayfield hasn’t completed more than 28 passes in a single game. Mayfield had completed at least 28 passes on 13 occasions in 2019 alone, prior to Stefanski coming aboard.

While losing Landry is tough when stacked on top of the loss of OBJ, the fact that the Browns are built to run the ball should make up for the injuries. Landry and OBJ are two tremendous talents at wide receiver, but the way Cleveland has been built means they’re more than capable of coping with the losses.

In fact, don’t put it past the Browns to run 13 personnel at all-time highs without Landry and Beckham Jr. Still, his absence will be felt, as Landry was targeted on 21.3% of the team’s attempts a season ago. Landry and Beckham Jr. combined for 30.1% of the team’s receptions and 31.3% of the receiving yards in 2020 despite OBJ missing eight games.

Who will replace Landry for the short term?

While he’s likely to return, the short-term fix for Landry’s absence should come down to three players. Rookie WR Anthony Schwartz seems to be the likely replacement on slot targets, while Donovan Peoples-Jones is presumably the new outside threat. Rashard Higgins also factors in and will likely see more targets.

Schwartz, the speedster from Auburn, caught 3 passes for 69 yards in his season debut but was targeted just once on Sunday. His target was Mayfield’s interception and 1 of just 2 incompletions on the day. Schwartz quit on the route at the top of his break, and the pass was picked with ease. After two games, the jury is clearly still out on Schwartz as an NFL route runner.

DPJ was targeted just once while Higgins saw 2 looks come his way. Rookie Demetric Felton turned 2 targets into 51 yards and a touchdown with his elusiveness and shouldn’t be overlooked. Felton, a wide receiver-turned-running back transitioning back to a receiver, is a dynamic player with the ball in his hands and had 114 total all-purpose yards against Houston.

The Browns are still a playoff team

As mentioned briefly earlier, Stefanski hasn’t had Mayfield throw all that often since he took over. The NFL’s top rushing duo of Nick Chubb and Kareem Hunt is more than capable of handling the load for the Browns. Chubb and Hunt have rushed for 262 yards and 4 touchdowns so far this season.

In fact, with this rushing duo and their trio of tight ends, Cleveland may still be in the driver’s seat for the AFC North crown. At the very least, they are still a playoff team.

Joel Bitonio is playing like the league’s best left guard. Jack Conklin and Wyatt Teller have anchored the right side of the line. Cleveland’s roster is deep, talented, and ready to weather the storm.

As long as Mayfield is the quarterback and not a linebacker attempting tackles, they’re in good hands. And Stefanski clearly knows that.