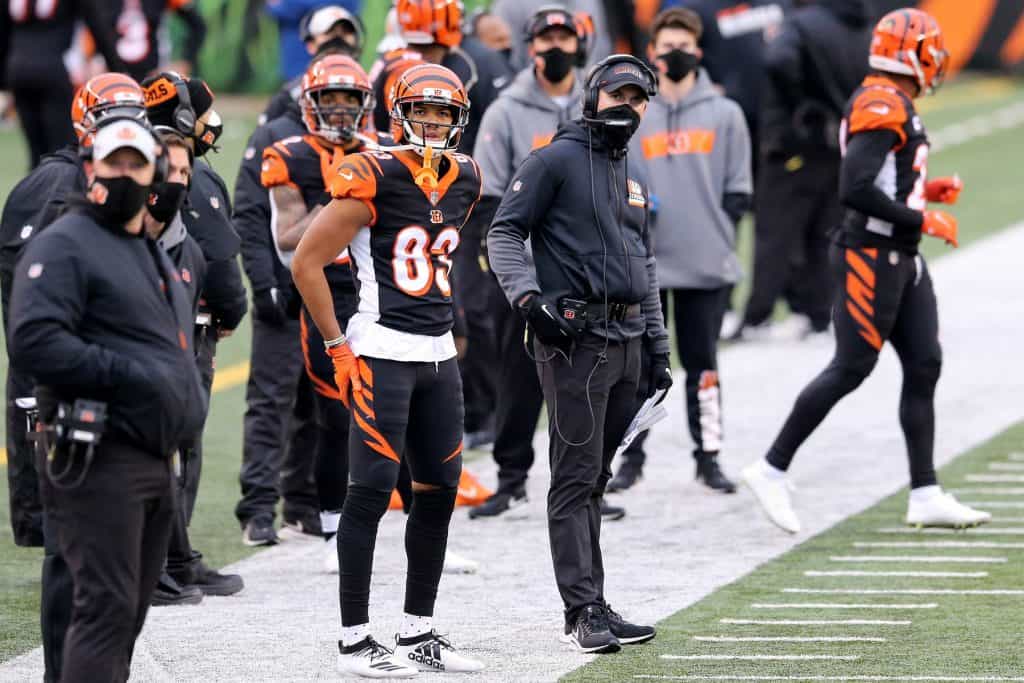 As the organization continues its rebuild, the Cincinnati Bengals’ depth chart remains a work in progress. After a few additions in NFL free agency and during the 2021 NFL Draft, the Bengals are looking to take the next step forward in 2021.

Did the Bengals do enough this offseason to bolster their offense around Joe Burrow?

Can the Bengals’ offense keep Burrow upright in 2021?

As with all teams, you live and die by the quarterback. If the first 10 games are any indication, the Bengals found a great one in Joe Burrow. Unfortunately, a gruesome knee injury halted Burrow’s progression. At the time of his injury in Week 11, Burrow had attempted the second-most passes in the NFL at 404 and had five games of 300+ yards passing, including a 406-yard performance in Week 7.

Burrow completed 64.7% of his attempts for 2,688 yards, 13 touchdowns, and 5 interceptions. Adding 3 more scores on the ground, Burrow proved he was worthy of the No. 1 overall selection and will sit atop the Bengals’ depth chart for the next decade.

The concern comes down to whether or not Burrow will be ready to return from his torn ACL and PCL by Week 1. As of now, Burrow is on track to play Week 1. Nevertheless, the timing of when the injury took place is the biggest concern. If Burrow were to miss Week 1, Brandon Allen would then step in at quarterback.

Coming off back-to-back seasons with 1,100+ rushing and 280+ receiving yards, 2020 was a down year for Joe Mixon. Awarded with a contract extension last offseason, Mixon played in only six games. He registered 140 total touches for 566 yards and 4 touchdowns. Nevertheless, Mixon is only 24 years old, and he should enjoy a bounce-back year in 2021 for the Bengals.

Last season for the Bengals, Samaje Perine played in all 16 games (one start) and rushed 63 times for 301 yards and 3 touchdowns. He has played in 44 games (nine starts) over his career and rushed 251 times for 952 yards and 4 scores while also catching 36 passes for 253 yards and a touchdown. With Giovani Bernard now with the Tampa Bay Buccaneers, he will be first in line for touches should injuries creep up again with Mixon.

Chris Evans (no, not Captain America) could be a name who could surprise some fans. Selected with pick No. 202, Evans was a productive back at Michigan despite their offensive struggles. He brings a similar skillset to Bernard with his receiving ability and could be on the field quite a bit for passing situations should the team feel his pass protection is up to par.

When you draft a QB, you do two things — protect them and give them weapons. The Bengals nailed the second part of the equation in the 2020 NFL Draft with second-round pick Tee Higgins out of Clemson. Playing on 74% of the snaps, Higgins saw 19% of the Bengals targets (108). Catching 67 passes, he led the team in yards (908) and touchdowns (6). With A.J. Green now in Arizona, the Bengals have a new face sitting on top of the WR depth chart.

Speaking of adding weapons to a young QB, the Bengals quickly doubled down on this mantra during the NFL Draft. Despite Burrow under constant pressure and having his seas ended because of it, the Bengals chose not to go with Penei Sewell at No. 5 overall. Instead, they selected Burrow’s former teammate and phenom Ja’Marr Chase. It’s hard to deny the potential ceiling the duo could have together, but it is all contingent on Burrow remaining upright.

Entering his fifth season in the NFL, Tyler Boyd is a highly skilled receiver who should continue to play well as the WR2 for the Bengals. He averaged only 10.6 yards per reception in 2020 but did have 43 receptions go for a first down. In fact, Boyd has had 148 receptions go for first downs over the last three seasons combined.

At 6’5″, Auden Tate is the tallest player in the receiver on the Bengals depth chart. Tate caught 54 passes over the last two seasons but will likely be bumped back down the depth chart in a post-draft update. Mike Thomas (no, not the elite one) saw 21 targets in his first year with Cincinnati, doubling his career totals. Previously, Thomas spent his first four seasons with the Rams.

Another problematic position on the Bengals depth chart is tight end. In his second year, Drew Sample caught 40 passes for 349 yards and 1 touchdown. No one would call him a difference-maker, however, as his best asset is his blocking ability.

In the Bengals’ first two games, C.J. Uzomah was arguably Burrow’s favorite target. Uzomah had 11 targets in his first two games, catching 8 for 87 yards and 1 touchdown. Unfortunately, Uzomah suffered a torn Achilles in the fourth quarter of Week 2 that he is still in the process of recovering from.

After missing 10 games his rookie year, Jonah Williams returned as the Bengals’ best offensive lineman in 2020. Williams is still learning the position’s nuances, but his size and quick feet give him all the traits to become one of the league’s best. The Bengals are betting big on Williams and his trajectory after bypassing on Sewell in the NFL Draft.

One of the Bengals’ significant upgrades made in free agency included bringing in former Vikings LT Riley Reiff. Having made 127 regular-season starts in his nine-year career, Reiff signed a one-year deal with Cincinnati and is expected to move to right tackle.

Hakeem Adeniji was a four-year starter at Kansas. The former sixth-round pick is one of the more versatile linemen on the Bengals depth chart. Adeniji has played at all three positions and started five contests last season.

The Bengals eventually selected a tackle, waiting until Round 4 to select D’Ante Smith out of East Carolina. Smith was a three-year starter who offers solid length and a foundation of skills to develop into a reliable rotational depth asset.

Quinton Spain re-signed with the Bengals on a one-year deal during free agency. Spain was surprisingly cut by the Buffalo Bills during the season and quickly found his way onto the Bengals depth chart. Despite being new to the team, he made eight starts at right guard.

The Bengals made sure to address their offensive line inside the first two rounds with Clemson’s OL Jackson Carman. He played in 40 career games (27 starts) and in each of his three seasons helped Clemson to ACC titles and berths in the College Football Playoff. He played tackle while at Clemson but will likely slide inside to guard.

Since 2019, Michael Jordan had been the starting left guard, but the Bengals benched him due to poor performance last season. Jordan will likely end up as a backup following the selection of Carman.

Xavier Su’a-Filo nearly missed the entire season after suffering an ankle injury in Week 1 against the Chargers. He returned from IR in Week 13 and started the final four games.

Billy Price was a first-round pick for the Bengals back in 2018 and is the presumed starter for 2021. Selected as a center, he spent most of his time at guard due to losing a positional battle with Trey Hopkins. However, Hopkins tore his ACL in Week 17, making it Price’s job to lose as the starting center on the Bengals depth chart.

Hopkins is still rehabbing from his ACL injury, and given the timing (Week 17), he could miss the majority of the 2021 season. The 28-year-old started 31 of a possible 32 games at center over the past two seasons.