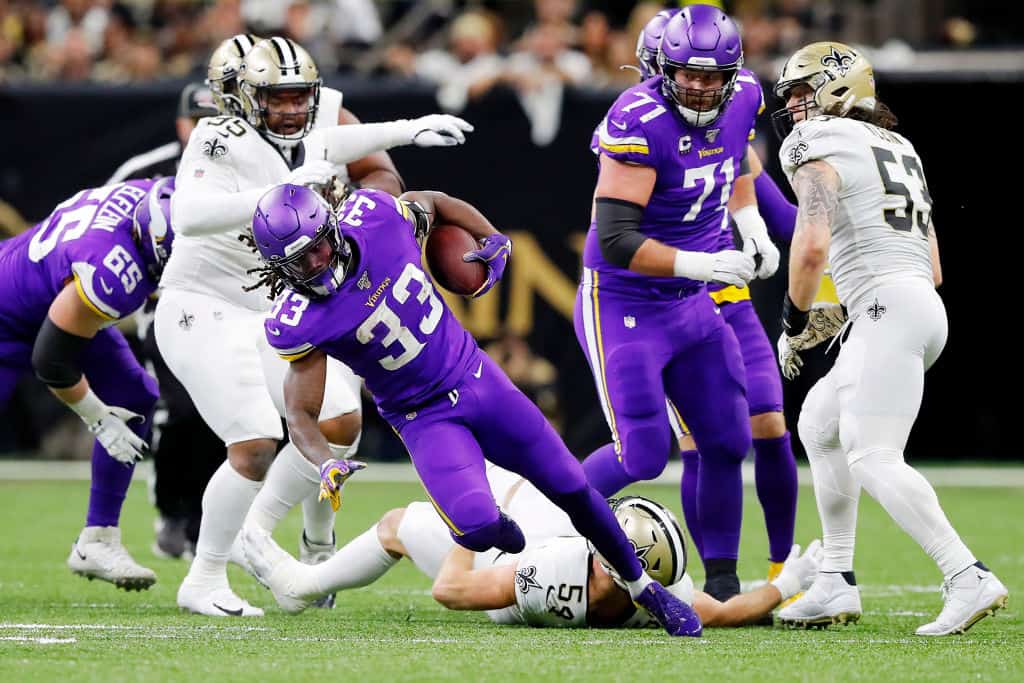 NEW ORLEANS, LOUISIANA - JANUARY 05: Dalvin Cook #33 of the Minnesota Vikings carries the ball during the first half against the New Orleans Saints in the NFC Wild Card Playoff game at Mercedes Benz Superdome on January 05, 2020 in New Orleans, Louisiana. (Photo by Kevin C. Cox/Getty Images)
What's in this article? Click to show
Who plays in the Christmas Day NFL game today?
Vikings vs. Saints Christmas Day Week 16 | Start time, TV Channel, and live stream
Christmas Day NFL Game Today | What to expect from the Vikings vs. Saints
Can the Vikings’ offensive stars crack this Saints’ defense?

Merry Christmas and Happy Holidays to all. Christmas Eve falls on a Thursday in 2020, so the NFL pushed Thursday Night Football back to Christmas Day, the first NFL game on Christmas since 2017. So who plays in this NFL game today? The Minnesota Vikings head down to New Orleans to take on the Saints. Veteran quarterback Drew Brees returned in Week 15 following his four-week recovery from numerous broken ribs and a partially collapsed lung. Can the Saints get things straight on offense against a team scrapping for the final spot in the NFC playoffs?

There is the potential for a Christmas Day NFL game from 2020 until 2023, as Christmas falls on Friday through Monday during that time. The first games played on Christmas Day were back in 1971. The 1971 divisional round of the playoffs had the first two games scheduled for Christmas. It featured the Vikings versus the Dallas Cowboys and the NFL’s longest game in history between the Miami Dolphins and Kansas City Chiefs, which saw two overtimes.

Who plays in the Christmas Day NFL game today?

Christmas Day NFL Game Today | What to expect from the Vikings vs. Saints

After a 1-5 start, Minnesota won five of its next six games and got themselves back in the wildcard conversation. But after two close losses to the Tampa Bay Buccaneers and Chicago Bears, their playoff hopes are on life support. While winning out is all Minnesota can control, they also need the Arizona Cardinals to lose out and the Bears to lose one game to secure the first-ever NFC seventh seed.

Things aren’t looking too bright, though. Brees is back under center for the Saints’ offense. While Michael Thomas is on injured reserve until the postseason, things should look more cohesive offensively for New Orleans this Sunday between the rushing and passing offense. Minnesota allows the ninth-most rushing and passing yards per game this season at 252.4 and 125.6, respectively. Brees should get Kamara involved in the passing game more effectively than Taysom Hill could during his four-game stint.

Kamara has 777 rushing yards and 739 receiving yards so far this season. There is an outside shot with two games left that he can cross the 1,000-yard mark in both. The fourth-year RB from the University of Tennessee leads New Orleans in both receiving and rushing yards. He has bounced back from a down year to become one of the best RBs in 2020 on the ground and in the passing game.

Can the Vikings’ offensive stars crack this Saints’ defense?

The Saints defense continues to be one of the best overall units in the league. While New Orleans has a stud RB to take advantage of a Minnesota defense that’s held just one team to under 20 points this season, the Vikings are bringing their own bruiser to the bayou. RB Dalvin Cook has put together a better season in 2020 than his domination during 2019. Cook has torn the field up for 1,484 rushing yards and 15 TDs. He has also rushed for 100-plus yards in eight of his 13 games this season. Cook also produced a five-game span where he rushed for 745 yards.

The Vikings also have rookie WR Justin Jefferson, who currently has 1,182 receiving yards. He is closing in on former Vikings rookie WR Randy Moss’ receiving yards record of 1,313. With two games left, this has a much better chance at happening than Kamara’s potential milestone. The Vikings will try to give the Saints a fight, but after shaking off the rust in Week 15, Drew Brees and the Saints offense should get back on track, lifting some pressure off this defense and end Christmas in the win column.