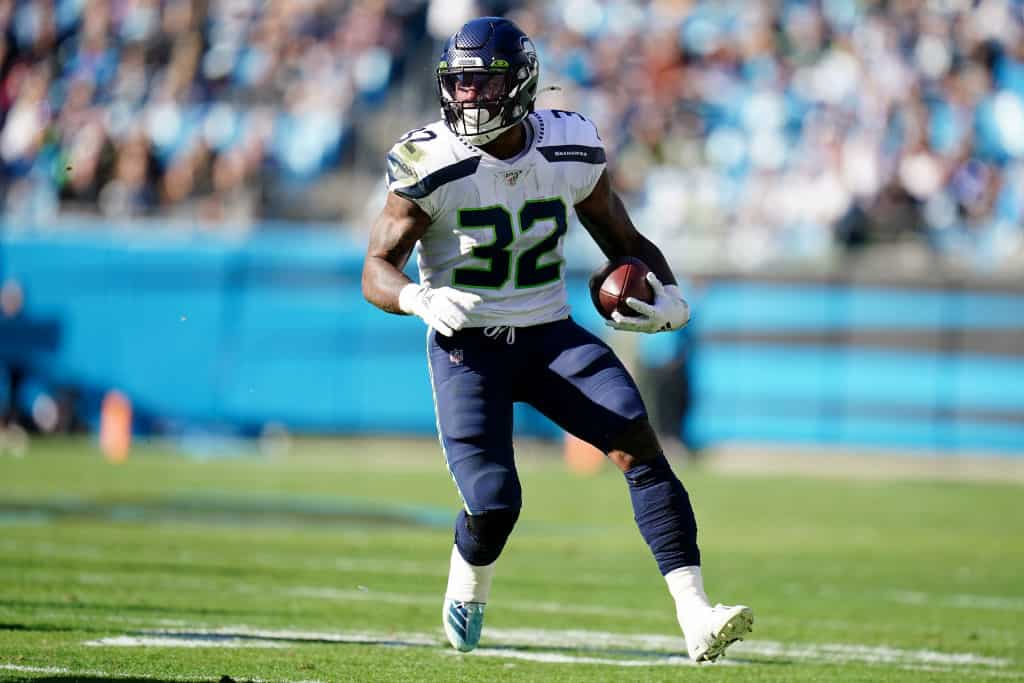 CHARLOTTE, NORTH CAROLINA - DECEMBER 15: Chris Carson #32 of the Seattle Seahawks during the first half during their game against the Carolina Panthers at Bank of America Stadium on December 15, 2019 in Charlotte, North Carolina. (Photo by Jacob Kupferman/Getty Images)
What's in this article? Click to show
Chris Carson appears likely to suit up on Sunday vs. Philadelphia
Chris Carson is one of the most underrated running backs in the NFL and fantasy football
Chris Carson could be on a snap count restricting in his first game back
Want more fantasy football analysis and news?

We know in the fantasy football world that once Thanksgiving Day hits, only two weeks are remaining to secure spots on your league’s fantasy playoffs. Even if you started out slow, hitting the end of your season firing on all cylinders is all it takes, and you don’t have to be the best team, only the best team right now. It appears that fantasy managers will be getting a big boost in Week 12 as Seattle Seahawks RB Chris Carson looks to make his return from an injury that has kept him sidelined since Week 7. With a matchup against the Philadelphia Eagles on tap for this week, what can we expect out of Carson, and will the team give him a full workload right out of the gate or ease him back into the rotation?

Update November 29: Adam Schefter reported that Chris Carson is expected to return to the field in Week 12.

Chris Carson appears likely to suit up on Sunday vs. Philadelphia

According to head coach Pete Carroll, we can reasonably expect to see Chris Carson make his return from injury in Week 12, this coming from Michael-Shawn Dugar of The Athletic.

Jordan Duncan, a contributor for the Seahawks official site, reiterated his point when discussing Carroll’s reaction to watching Carson run in practice.

“Man, I wish you guys could see Chris right now,” Carroll said as he stared off toward the field at Carson before even taking any questions in his Friday press conference. “He’s killing it!”

There was genuine optimism that Carson could have played last week, but with the team getting back Carlos Hyde for the game, they felt they had enough depth at the position to keep the fourth-year running back out of Oklahoma State on the sidelines for one more game.

Despite being out for the last four games due to his foot injury, Chris Carson still leads the running back room in nearly every category.

His 66 carries are first on the team; he also leads the running backs with rushing yards (323). Only Russell Wilson has more rushing yards on the season (367). He has seen the most targets out of the backfield (25), along with receptions (22), yards (147), and is the only non-receiver on the team to have multiple receiving touchdowns (3).

If Chris Carson returns this week, which all signs point to happening, the fantasy world be reacquainted with one of the best running backs in the NFL.

It seems that the whole fantasy world forgot that Carson was the RB12 in 2019. He played in 15 games, carrying the ball 278 times for 1,230 yards and scoring seven rushing touchdowns. Carson also showed his value in the passing game, catching 37 of his 47 targets for 266 yards and two more touchdowns. It was the second year in a row that Carson had seen over 270 touches, more than 1,200 all-purpose yards, and scored nine touchdowns.

His 2020 started off just as strong. His 91 touches for 470 yards and six touchdowns still have Carson ranked as the RB16 in PPR formats despite having only played in six games this year. His 17.5 points per game are RB7 on the season in fantasy. Before the team’s Week 6 bye, Chris Carson was the RB5.

This is the kind of production that gets you into the playoffs and hoisting the trophy at the end of the season.

I know I have talked about how he leads the running back room and everything, but the Seahawks know how long the injury kept Chris Carson out and don’t want to see him return to the sidelines in his first game.

While I absolutely would expect to see him get at least 15 touches in this game, which is RB2 status based on volume alone, the ceiling could be capped if they go for a committee approach against the Eagles.

Part of the reason is the team getting back Carlos Hyde last week, who played very well in their Thursday night game against the Arizona Cardinals. Hyde was the leading rusher of the night for both teams, carrying the ball 14 times for 79 yards and a touchdown while catching two of his three targets for 16 yards. Hyde finished as the RB7 in PPR scoring with 17.5 points in Week 11.

It is worth noting that the combo of DeeJay Dallas and Travis Homer also held their own during Carson’s absence. The downside is that in the four games where they saw any sizeable amount of work, only two RB2 performances were had between the two of them, both by Dallas (Week 7 and 8).

This week it should be the Carson and Hyde show against an Eagles team that is struggling at the moment, yet somehow on top of the NFC East with a 3-6-1 record.

The one spot the Eagles have been decent in 2020 has been their run defense. They give up the eighth-fewest fantasy points per game to opposing running backs at 20.73. Even though they have faced the fourth-most rushing attempts (244), they have allowed the 10th-fewest yards (836) for 76 per game to the position. They have struggled with keeping them out of the end zone, allowing 10 touchdowns this season on the ground.

Part of the reason they rank so well in points against is that teams have not tested their defense much when it comes to covering backs in the passing game. They have only seen 50 targets to running backs, the fourth-fewest in the NFL, and have given up the third-fewest completions (36). While the 8.25 yards per reception is respectable, they are one of just four NFL teams who have not allowed a receiving touchdown to the running back.

The Seattle Seahawks are built around Russell Wilson right now, and there is no reason to go away from that in this matchup.

I do like Chris Carson as a mid-RB2 this week if he returns from injury with Hyde in the lower RB3 territory. Moving the ball should not be an issue for this Seattle team, and once they get into the red zone, that is where I expect to see Carson getting the bulk of the rushing work.

In this article:carlos hyde, Chris Carson