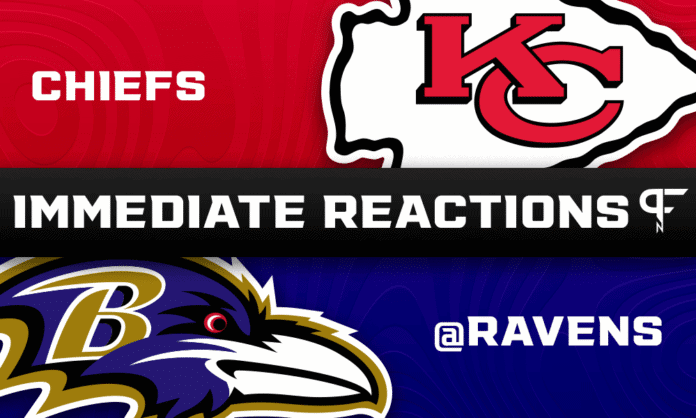 The Chiefs vs. Ravens game was another primetime gem, gifting us fantastic highlights, a score by 7 different players, and much more.

By Dalton Miller
September 19, 2021
What's in this article? Click to show
Observations from the Chiefs vs. Ravens game
Chiefs vs. Ravens takeaways: Patrick Mahomes is the best ever
Lamar Jackson is playing backyard football in 2021
Marcus Peters is the Ravens biggest loss

There hasn’t been a primetime game that’s disappointed in 2021. The Kansas City Chiefs vs. the Baltimore Ravens was no different. This game took another dose of mind-altering substances. From blown coverages and missed tackles, to jump passes and touchdowns, this game had a little bit of everything.

Observations from the Chiefs vs. Ravens game

Here is the final score and highlights from the Chiefs vs. Ravens matchup at M&T Bank Stadium in Week 2.

Chiefs vs. Ravens takeaways: Patrick Mahomes is the best ever

Even Mahomes’ interception was incredible to watch. We saw a similar play earlier in the day, but the ball fell harmlessly. That was made by Carson Wentz, who was injured on the attempt.

Mahomes is the evolved version of that. His field vision is unmatched by anybody else in the league. And even if others have it, they don’t have the physical ability to finish the play they see — Mahomes does.

Lamar Jackson is a more gifted runner than Mahomes. It’s not particularly close. Kyler Murray falls in that same category, but he isn’t the buttoned-up passer Mahomes is inside structure. Murray makes joystick-level escapes and does that better than anyone, given his mobility. But he doesn’t consistently win from the pocket. — Mahomes does.

Even though he’ll almost surely never win seven Super Bowls, Mahomes will go down as the greatest quarterback of all time. He just hasn’t played for long enough yet.

This isn’t something that was overwhelming in previous seasons. It appears Jackson is going out of his way to make more plays with his arm, and it’s leading to some incredibly fascinating attempts, both good and bad.

Evaluating quarterback play in 2021 has become incredibly difficult. Everywhere you look, a QB is completing over 70% of their passes for close to 7 yards per attempt or more. Just a few years ago, that would be considered an outstanding game. But this is where we sit with Jackson and other passers.

Jackson has never been a traditional QB, and it appears he’s juked his way even farther from that point. Now, we’re seeing him hold onto the ball, avoid rushers, load up, jump, and throw passes nearly underhanded. The speed he moves and the way he delivers the ball doesn’t make sense, so many of us don’t like it.

A jump pass touchdown throw from Lamar Jackson. This game is fun.pic.twitter.com/bmnUfyro0b

Twitter is ablaze with “he can’t throw.” From 30,000 feet, that appears to be the truth. Yet, he’s still completing more passes than expected, despite how unappetizing it looks at times.

He’s the reason the Ravens won tonight vs. the Chiefs. And even though it looks different, it’s still magical.

They can do whatever they want on the ground with whatever running back they want to use. It doesn’t matter because as long as Jackson remains healthy, this rushing attack will prevail.

Defensively, Wink Martindale wasn’t as aggressive against Kansas City as he is against most teams, but that was probably by design. The Ravens want to line up in man coverage and send five-plus pass rushers as much as possible to put pressure on opposing quarterbacks.

Marcus Peters creates another problem for offenses. Only Xavien Howard can lay claim to being a bigger ball hawk at the cornerback position. The loss of Peters means not only losing their second-best coverage player but their other biggest defensive playmaker alongside Marlon Humphrey.