Chiefs cornerback L’Jarius Sneed could be a key early contributor

Despite being drafted in the fourth round of the 2020 NFL Draft, Chiefs saftey/cornerback L'Jarius Sneed figures to be a key contributor early in his career.

It’s no secret the NFL has become a pass-first league. Only one team — the Baltimore Ravens — ran the ball more than they passed last season, and the most pass-happy team — the Atlanta Falcons — threw the ball twice as many times as they ran it. For defenses to keep up, they must have several talented, versatile defensive backs. That’s the thinking that led the Kansas City Chiefs to select cornerback L’Jarius Sneed in the fourth round of the 2020 NFL Draft.

It can often be a struggle for rookies to contribute right away, but the Louisiana Tech product should have no shortage of opportunity in the Chiefs defense. Sneed spent three seasons for the Bulldogs as a cornerback before switching to safety his senior season. That experience will likely have Sneed embroiled in a battle with incumbent Rashad Fenton as the team’s nickel cornerback.

The experience at safety will provide the Chiefs with quality depth at the position, as well. Sneed won’t be in the mix for a starting spot with Juan Thornhill and Tyrann Mathieu in the fold. But if either safety succumbs to injury, Sneed would be the likely candidate to slide over as the replacement. With this potential impact in mind, what type of player are the Chiefs getting in their fourth-round selection? For that, we turn to the RAS.

No matter how you slice it, Sneed is a unique athlete and is bringing a fantastic athletic profile to the cornerback position for the Chiefs. Sneed tested as a safety at the NFL Combine and notched an “Elite” grade, posting a 9.43 overall RAS score as a free safety. But, thanks to the hard work of Kent Lee Platte, developer of RAS, we can see how his RAS translates as a cornerback, where he’s likely to see the majority of his playing time. 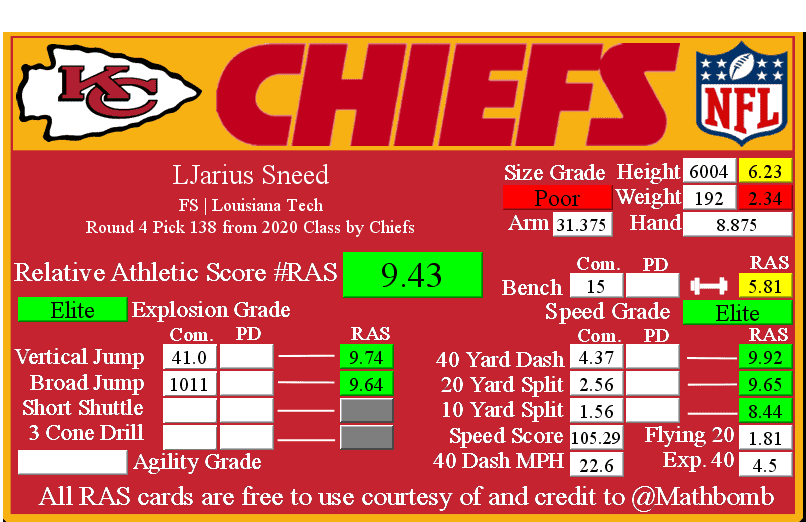 Sneed RAS as a safety 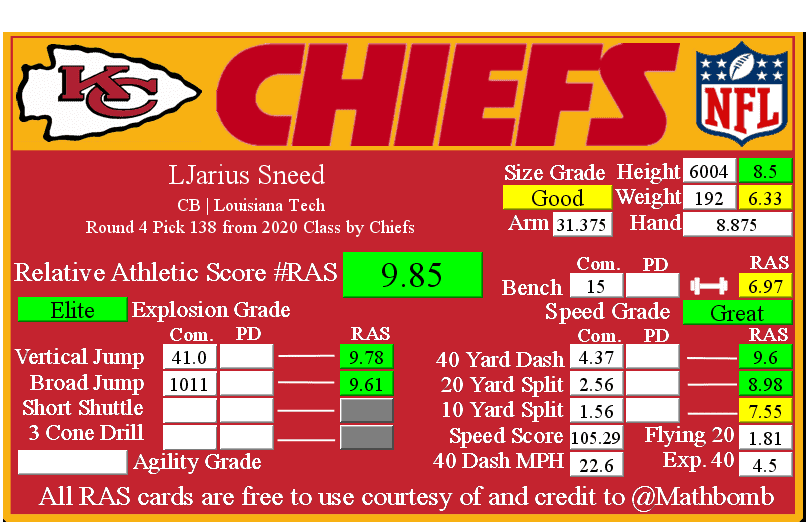 Sneed RAS as a cornerback

Sneed is an elite athlete

Switching Sneed to cornerback actually improves his overall RAS and turns him into an even more elite and unique athletic talent at the position. Where Sneed particularly shines is in the speed department. He posted a 4.37 40-yard dash, good for the fastest time of any defensive player selected in the 2020 NFL Draft (Jets’ Javelin Guidry did post a faster time, but was undrafted). Sneed’s 4.37 40 is the 70th fastest at the position dating all the way back to 1987, encompassing more than 1,700 CBs during that time.

Speed is far from the only tool at Sneed’s disposal. It takes more than just pure speed to make a unique athlete. Sneed is also able to pair his speed with phenomenal burst. With a 41-inch vertical and a broad jump of 10’ 11”, Sneed scored as “Elite” in the explosion category as well. This explosion score is put to use when Sneed is asked to change direction and accelerate to catch up with a receiver breaking off his route.

Sneed has the speed to stay in the receiver’s hip pocket down the field, and the burst to recover when a receiver suddenly changes direction on him. He also has adequate size for the position, though he could put on some muscle.

Looking beyond the physical

Sneed’s contribution at cornerback goes beyond the physical tools, too. Yes, he’s an elite athlete, but that alone won’t get you very far in a league full of elite athletes. Sneed also has the practical on-field skills to pair with his athleticism. Namely, he’s an absolute ballhawk. When you play in a non-Power 5 conference like Conference USA, you have to do a little extra to really stand out, which is what Sneed did at Louisiana Tech.

Sneed finished his college career for Louisiana Tech with back-to-back seasons with three interceptions. For his Bulldogs career, Sneed finished with 8 interceptions, returning 3 of them for touchdowns. Even when he wasn’t taking the ball away, Sneed was making his presence known. Along with the eight interceptions, Sneed walked away with 19 passes defended and tacked on 2.5 sacks and 5.5 tackles for loss for good measure.

When you add on the ability to contribute on special teams, L’Jarius Sneed has all the makings of a key contributor early at cornerback — or safety — for the Chiefs. Kansas City won the Super Bowl last season with an incredible offense thanks to the likes of Patrick Mahomes and Tyreek Hill. But the Chiefs are also added high-caliber athletes to the defensive side of the ball, which can be a truly scary proposition for the rest of the NFL.