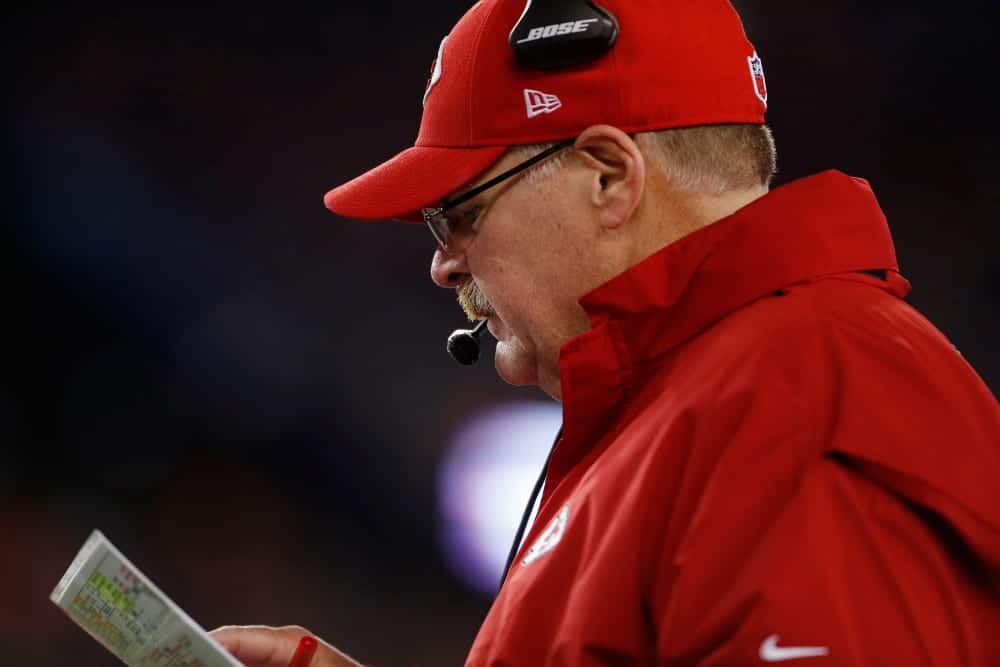 Jan 16, 2016; Foxborough, MA, USA; Kansas City Chiefs head coach Andy Reid looks on from the sidelines against the New England Patriots during the first half in the AFC Divisional round playoff game at Gillette Stadium. Mandatory Credit: David Butler II-USA TODAY Sports
What's in this article? Click to show
Reid’s time with the Eagles
Reid’s validation
Chiefs in 2020 and beyond

There was no surreal moment. No introspective trance. At least, not if Chiefs head coach Andy Reid is telling you what happened in February of 2020.

The longtime NFL head coach isn’t one for surreal moments, but not necessarily out of habit. Reid’s career, until this past February, was a career that crept painfully close to those moments, only to watch them pass by, inches out of reach.

As of 2020, Reid has been in the NFL since 1992. He started as an offensive line coach for the Green Bay Packers, after working up the ladder of success through the college ranks. Reid’s influence on the offensive Packers’ staff gradually grew, and in 1999, he was hired to be the head coach of the Philadelphia Eagles.

Reid’s time with the Eagles

With the Eagles, Reid posted a career record of 130-92 in 14 years, averaging almost ten wins a season. He made the playoffs nine times, winning a playoff game in all but two qualifying seasons. He made the NFC Championship five times, with four consecutive trips from 2001 to 2004. In 2004, his Eagles made the Super Bowl.

They lost to the New England Patriots, tied entering the fourth quarter.

In 2013, after a 4-12 season, the Eagles parted ways with Reid, and he quickly generated interest on the coaching circuit. Reid was a rare candidate — an established winner who had turned around a franchise before. But amid Reid’s transition, there was a subtle fear lingering in the minds of onlookers: That Reid was good, but perhaps not good enough.

In the history of every sport, there is a certain coalition doomed by this proximity to greatness. Players and coaches who grew painfully close to validation, only to watch it slip away. Being close is almost worse than the alternative; if you lose out on your opportunity, what you might’ve done wrong, and what you might’ve lost, eats at you for decades at a time.

Reid’s first years in Kansas City reinforced his standing in this coalition. From 2013 to 2017, Reid amassed a record of 53-27, making the playoffs in all but one of those seasons. Despite the usual steadiness associated with Reid, he only earned one playoff victory to show for his success. The echoes grew louder. Good, but not good enough.

But the Chiefs’ overtime loss to the Patriots in the 2019 AFC Championship felt like they would be back, and by the infallible bond of intuition, the Chiefs were back one year later in 2020. The Chiefs came back from a 21-point deficit to steamroll the unsuspecting Texans, then continued their AFC South tour in the AFC Championship game by besting the upstart Tennessee Titans. In the ensuing Super Bowl, again with another gap to bridge, Reid’s 2020 Chiefs didn’t blink — they stole the momentum back and willed the game back into their hands.

By the end of that night, on February 2nd, Reid had the ring to validate his record. 28 years in the league. 21 as a head coach. Reid’s endless quest had finally ended.

It was as surreal a moment as any, and at first, Reid naturally resisted. When Damien Williams scored the touchdowns to put the 2020 Chiefs up 31-20, Reid could’ve celebrated a victory. But he didn’t. Not yet. He’d been this close before.

Even after Frank Clark brought Jimmy Garoppolo to the turf on fourth down, it took the cold rush of the Gatorade bath to snap Reid out of his coaching routine and let his emotions rise to the surface. One moment shielding his microphone from the noise of the crowd to facilitate the next play, a play as important as any other; the next moment drenched in power drink, yelling in celebration at no one, at nothing. Simply yelling for the world to hear, as players flocked around him, in a language of pure passion, elation, and energy.

On the surface, it’s clear that the search for the ring meant something to Reid, a man who toiled through year after year of endless work and anticipation, only to see it yield no lasting legacy. But perhaps Reid found more meaning in the process, rather than the result: Not only coaching up young players on the field but teaching them how to be men off of it. Rebounding from the death of his son in 2012, and finding something to play for when loss made everything numb.

Reid isn’t one for surreal moments. It’s not in his nature to be dramatic. In the post-game festivities, when asked what he would do in celebration, Reid proudly proclaimed his desire to get the biggest cheeseburger he could find. “Might make it a double.” The next morning, for the end-of-season press conference, Reid came in well-rested, joking, as usual, donning a floral Chiefs t-shirt. It would’ve been impossible for him not to mention what the win meant to him, but whenever he could, Reid deflected back to his players, and how special it was, not to win for himself and his legacy, but to win with them. For them.

You’ll hear people say this often; that no one deserved this Super Bowl ring more than Reid. Former players, Eagles, and Chiefs alumni alike, rushed to congratulate the coach after his Super Bowl victory, and thank him for all that he’d done. Even his former team, the Eagles, sent a nod of respect in his direction, proclaiming this time to be “his.” In the background, you can almost imagine Reid shaking his head, and with that little smirk hiding beneath a shaggy mustache, amending that statement. “Ours.”

Reid has his ring now, and with the endless quest now concluded, one has to wonder what’s next for the longtime head coach. Just months ago, Reid was still the coach who might not be good enough. His entire career led up to this moment, the anticipation building with each empty postseason trip. All of a sudden, Reid’s finger is not bare, and his to-do list is.

The misconception may be that something even ended at all. Reid’s quest for a ring is over, but the head coach was never fixated on it. It was never the most important thing. For Reid, being a coach was more important than being a winner.

Reid could have adopted a sense of entitlement over his years of unrealized success. But perhaps Reid found his fulfillment in other things. Not a futile, material, metallic accessory, but a lifestyle that prioritized others over himself. An ingrained code of duty, to help his players get the most out of their prized NFL opportunities, and to lead them on a similar path to his.

Onlookers will assume that something has now changed for Reid. Storylines will say that the lack of a ring drove him for two decades, and kept him coming back through waves of adversity. But in those moments, which strive to be surreal, Reid reveals his true nature. When the chaotic passion is expunged from his system, and as his team sweeps him off the sideline like an ocean wave, he doesn’t seek to be the center. He doesn’t raise his arms and fists in a prideful pose, though no one would blame him if he did.

Instead, Andy Reid searches for his wife and embraces her with a face frozen by feeling. Amidst the noise and the fanfare and the glamor of the Super Bowl, a silent moment which Reid finds more comforting.

In 2020, there is still much for the Chiefs to do. One ring has been claimed, but there are more to attain. The Patriots’ empire appears to be crumbling, and the AFC throne is vacant for the first time in decades. A crown sits with no wearer. A new legacy awaits, biding its time to choose its vessel, and the 2020 Chiefs, with MVP Patrick Mahomes and droves of supporting talent, are primed to be the new dynasty.

But the implications of legacy, and the superficial meanings of a ring, have never been most important to Reid. And that’s why he’ll come back in the summer, in spite of his endless quest now being concluded. Reid coaches for something else. Something greater.