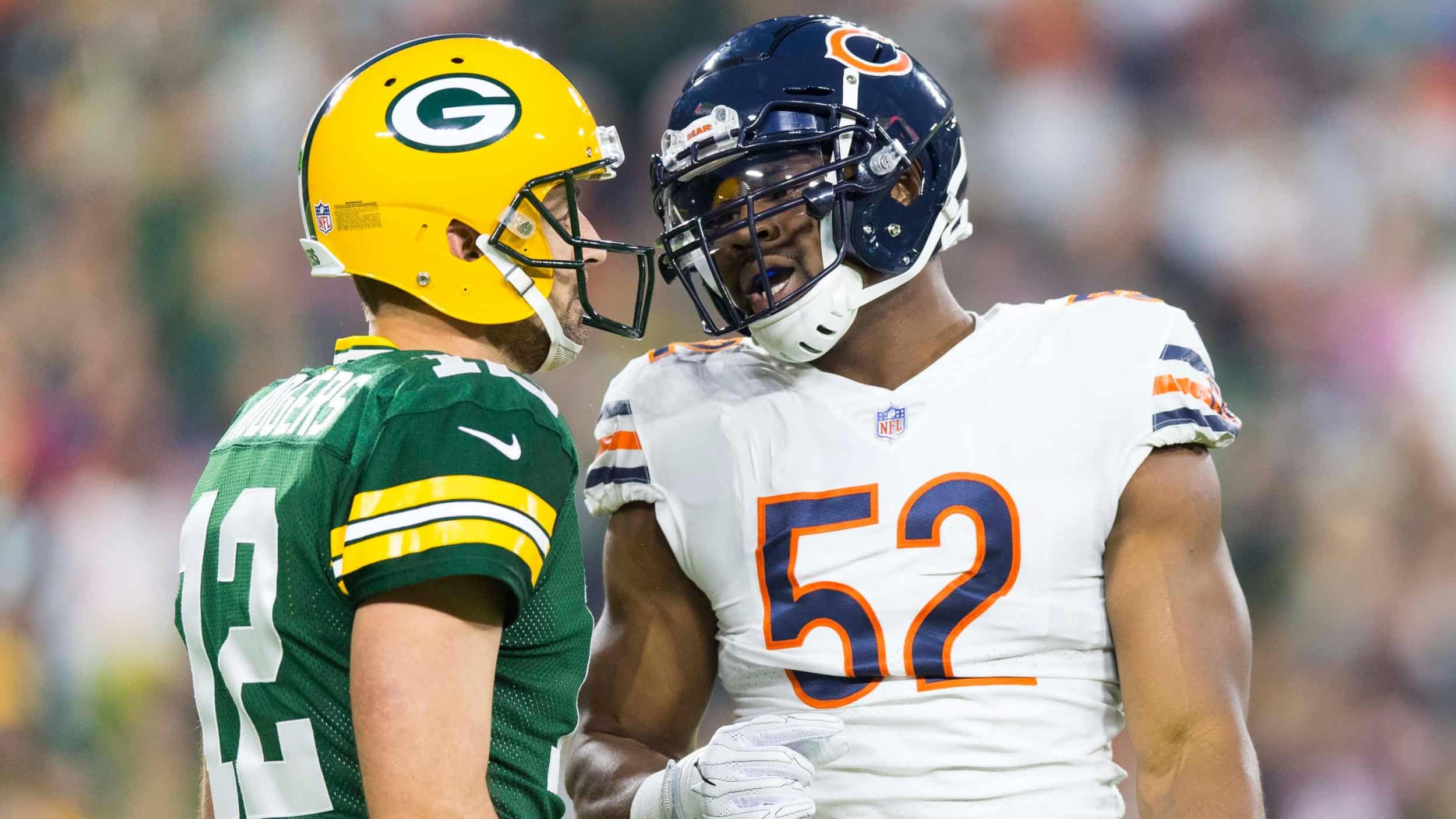 A few days ago, the Chicago Bears outside linebacker Khalil Mack stated he wants to be the best to ever play. In five seasons, Mack has been competing with Aaron Donald and J.J. Watt for that top spot. However, he has earned many accolades in his career already. Mack is building his prestige with four Pro Bowls and three NFL First Team All-Pro squads.

Mack has some exceptional talents that can compare him to the greatest defensive player ever, Lawrence Taylor. If Mack continues to build to his legacy, we will see the next Taylor and possibly the defensive G.O.A.T.

Expectations are higher now for the Chicago Bears. They had limited draft picks this year, but they made key selections with the ones they had that can only help boost this team over the top. If Mack can lead his team to a Super Bowl that would only help improve his case to become the very best.

What makes Mack a dominant force in the NFL and earn all his accolades? In this article, we will see his perception of the field and wicked speed, as well as some other unique qualities.

First of all, Mack is a persistent run defender. Mack finished this season 11th in yards lost in tackles with 78 total yards. He is a speedy outside rusher with excellent body control and strength to help him as a strong run defender.

In this clip, Mack is facing against a right tackle. Also, the right guard is down blocking, and the center is pulling to open up the B-gap. Although the Seahawks have numbers, off the snap, Mack drops his hips and breaks toward the right tackle’s outside shoulder.

Mack’s burst of speed allows him to use his rip move and break free. He then shuts down the run by planting with his left foot and driving toward the B-gap. Mack’s drive puts him in a position to dive and shut down a possible big run.

In this play, Mack starts in a 9-technique, on the outside shoulder of the tight end. Mack realizes he is on the strong side with a tight end and wing and has support on the outside too. So, Mack drives inside and breaks into the C-gap, in between the right tackle and tight end. Mack’s speed causes Kyle Rudolph to fall flat-footed and out of position. By the time Mack gets inside leverage, Rudolph side steps to attempt and block Mack.

Now, instead of the original gap open for the running back to go through, he must build momentum and try to handle the ball before he hits Mack. However, the running back can not stand toe-to-toe with Mack as he forces one of his 6 forced fumbles on the season in this play.

Mack is not only an exceptional run stopper, but he can contain the run game too.

In this video, Mack switches from a genuine outside linebacker to the left end outside position. Off the snap, Mack notices he is on the backside of the play. Instead of resting or falling into the wrong position, he prepares to shut down the counter run. Mack’s preparation was tested as the running back tried to cut back and find another lane.

However, Mack’s prominence allows him to shut down two lanes at once. If you notice, there are two green rectangles. The inner green rectangle is the cutback lane the running back intended to try and run through. Nonetheless, Mack is in a position to make the play in that inner rectangle. Mack has outside leverage, but he has placed the right tackle on his heels. This means Mack can either bull rush to close the lane or use his rip move and make the tackle.

For the outer rectangle, Mack needs to break off the block. Mack ends up doing that and chases down the running back with his speed and forces him into Mack’s support. He ends up making the tackle and proves he can contain back side runs too.

The Bears game changer is not just a dominant run defender, but also a great pass rusher. According to Pro Football Focus, Mack was graded as the eighth best pass rusher out of 186 edge rushers with an 85.1 grade.

In the above clip, we see Mack jam the slot receiver off the snap then rushes. When Mack rushes, he attacks the lineman before the lineman can create contact. This allows Mack to reach out and fight off the lineman’s hand with his long, robust arms before the lineman can make the block. The right tackle is attempting to grab the inner shoulder pads and keep Mack in front of him, but Mack sheds the block and makes the sack. But, Mack never goes for sacks, Mack goes for the strip and picks up another forced fumble.

Mack can make several subtle plays that slow down the quarterbacks reads and he can still make it to the backfield in seconds.

In this play, Mack lines up as a right end outside. He is located in his infamous 9-technique in order to build momentum and capitalize on his speed.

The Bears superstar begins pushing the left tackle to his outside shoulder. Once Mack is side-by-side with the lineman and about to make contact, he hits his rip move and flies by the block.

Instead of breaking down, Mack attacks the quarterback. He realizes Kirk Cousins is about to throw it so he changes his gameplan. Mack does not go for the sack, but he reaches out and creates contact with Cousins’ arm. This contact does not allow Cousins to finish his throw and ends the play with an incompletion.

Most speed rushers, outside linebackers, and defensive lineman can do what Mack can do to some degree. Yet, Mack has a couple of unique aspects to his game that puts him on another tier in the NFL. He can strip the ball, intercept passes, and cause stress for offensive lines.

In this video, Mack gets his first interception of the season in a Week 1 matchup against the Green Bay Packers. The Bears did not win this game, but Mack changed the outcome tremendously by forcing two turnovers.

Mack changes his approach here by dropping his hips and chopping his feet. After a few steps, he takes a hard cut with his left foot and bursts inside. This cut throws the right tackle off guard and generates pressure in the backfield. Not only does he generate pressure, but Mack notices the running back is near him too.

Mack’s perception changes as he locks his eyes on the quarterback’s eyes. He notices the quarterback is looking at the running back in the zone where Mack is located. Mack fights hands to break free from the block and backpedals. He reads the pass and earns himself a quick pick-six to give the Bears momentum.

Not only can he cause turnovers, but his ability to change offensive gameplans is something only a few players in the league can do. Although Mack does not face the most double teams the most, he still gets them. When he does, it typically opens up blitzes for his teammates so that they can add to their stat sheets too.

In this final clip, Mack lines up in a 7-technique, outside the right tackle. Mack knows he has an outside blitz coming in, so he decides to rush inside. Mack’s rush inside helps create the sack on Russell Wilson.

It all starts when Mack releases inside and the right tackle follows him. A half of a second later, the right guard begins to help the right tackle block Mack, so the right tackle can bounce back to blocking any outside threats. Once he notices the outside blitz, another defender took him head on, and the blitzing defender was in the backfield. The defender took a wide open shot and sacked the quarterback due to Mack clogging them and distracting the lineman in the middle of the trenches.

Mack has been an outstanding defensive player throughout his five seasons so far. He is not on any Mount Rushmore yet, but he is on the road to Canton with 53.0 career sacks already. If Mack continues his greatness, we can see Lawrence Taylor 2.0 or even a better version. As of right now, Mack is far from G.O.A.T. status, but he inches closer every year.

In this article:Featured, featured, khalil mack