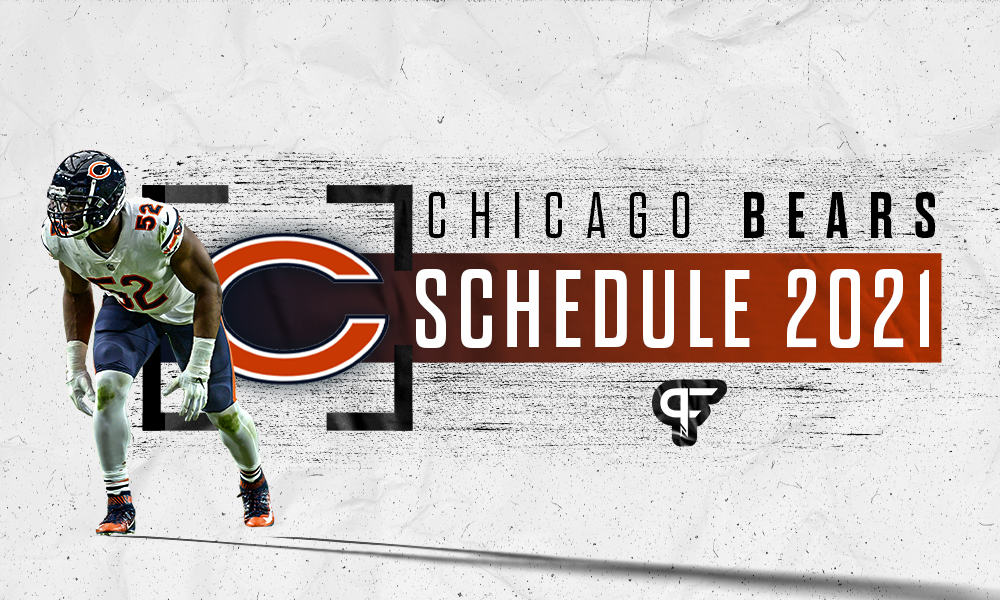 What is the Chicago Bears’ 2021 NFL schedule, how many primetime games do they play, and who are the toughest and easiest opponents on their schedule this season?

How many primetime games do the Bears play in 2021?

When is the Bears’ bye week?

This year looks set to be a potentially tough one for the Bears as their 2021 schedule ranks sixth in terms of strength of schedule. Chicago faces a particularly tough schedule on the road, as they face just four teams projected to win eight games or fewer. At home, however, their schedule is a lot more mixed in terms of the variation of opponents, ranking as the 14th easiest.

The Bears will play six games on their 2021 schedule against teams who are projected to win 10 or more games in 2021. Two of those games come against the Green Bay Packers who have won the last four meetings between the two. However, given the Aaron Rodgers’ situation, those games against the Packers could potentially take on a very different look altogether.

The remaining games come against the San Francisco 49ers, Baltimore Ravens, Tampa Bay Buccaneers, and Los Angeles Rams. Regardless of whether it is Andy Dalton, Nick Foles, or rookie Justin Fields under center, the Bears will have a tough time coming out of those games with a victory. If the Bears want to make it back to the playoffs in 2021, they need to try to at least split these six games 3-3.

With just four games against teams projected to win seven games or fewer, the Bears’ 2021 schedule does not contain much respite. Two of those games come against the Detroit Lions, who the Bears have beaten in five of their last six contests. While the Lions did win the last meeting, they will look very different with a new head coach and quarterback combination in 2021.

The Cincinnati Bengals and New York Giants present intriguing challenges for the Bears. The strength of the Bengals very much depends on how Joe Burrow returns from injury in 2021. Thus, if he is at his very best, the Bengals have a superb opportunity to take a victory in Chicago. Meanwhile, the Giants have invested heavily this offseason. Additionally, they have Daniel Jones, who is desperate to prove he is a worthy starter in the NFL.

The 2021 season was set to be an interesting one for the Bears, and a tough schedule makes it even more fascinating. It seemed like Matt Nagy and Ryan Pace were facing last chance saloon in 2021, but does the move to get Fields buy them more time?

In order to ensure they get the more necessary time, they need a strong 2021 season. However, a schedule that ranks among the hardest in the league is not going to help that. The projected Vegas win total for the Bears is set at 7.5 in 2021. Right now, that feels more like the Bears’ ceiling unless they can get their offense playing at a high level next season.