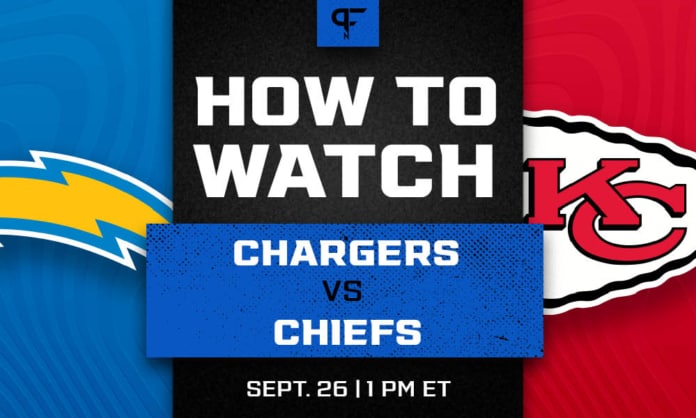 Chargers vs. Chiefs odds, line, prediction, and how to watch the Week 3 game

What are the Chargers vs. Chiefs odds and prediction, what channel is the game on, and how can you stream this Week 3 matchup?

The Los Angeles Chargers vs. Kansas City Chiefs Week 3 game will feature the first AFC West matchup for both teams in 2021. Let’s look at the current NFL odds, how to watch, and prediction for Sunday’s contest.

With quarterbacks like Patrick Mahomes and Justin Herbert involved, you’d expect fireworks in this matchup. The over/under set on Monday afternoon is at 49.5, which isn’t very high considering almost half the league averages 25 or more points per game. That list includes Kansas City, averaging 34 points per game through its first two weeks of the season. But Los Angeles, under new head coach Brandon Staley, has yet to find its groove offensively, putting up just 20 and 17 points, respectively, in two games.

You can pin the Chargers’ lack of offense on the growing pains that come with a new system. Facing a Dallas defense without its best defensive player in DeMarcus Lawrence on Sunday, Los Angeles mustered only 17 points. Specifically, a combination of a costly red-zone interception and 12 penalties for 99 yards prevented the Chargers from scoring more.

Herbert is moving the ball well this year, although he’s already thrown 3 interceptions. The 2020 first-round pick has completed 70.5% of his passes for 675 yards. But drives have stalled, and Herbert has thrown just 2 passing touchdowns, both to Mike Williams.

The Chargers’ defense has been solid through the first two weeks, holding opponents under 20 points per game. Their performance against Dak Prescott was a bright spot, as they held him to under 250 yards passing and no touchdowns. Much like the Chiefs, though, the Chargers struggled against the run on Sunday.

Chiefs must fix holes up front on defense

Like most expected, Mahomes and Travis Kelce looked great against Baltimore. While the Ravens were able to find a way to contain Tyreek Hill, the Kansas City offense moved the ball through the air and scored 4 touchdowns. But the Ravens exploited two facets of Andy Reid’s team — Clyde Edwards-Helaire and the run defense.

A first-round pick in 2020, Edwards-Helaire hasn’t looked great through the first two weeks of the season. His fumble on the Chiefs’ final drive was just the extra dab of Kansas City’s finest BBQ sauce the Ravens defense needed to put the game away. With just 3.3 yards per carry and 87 total yards on the ground, CEH is now proving to be more of a liability than an asset for Reid and the Chiefs.

However, the larger concern is on defense. Kansas City’s unit has given up over 200 yards per game on the ground through two contests. While getting Tyrann Mathieu back proved to be a relief, there’s work to be done up front, and it may start with moving Chris Jones back to the middle of the defensive line.

The Chargers know they can move the ball against the Chiefs in Week 3. While they don’t have the skillset on the ground that the Ravens do, Austin Ekeler is a Pro-Bowl caliber running back that can get the job done.

Yet, Kansas City will be angry after losing the way they did. Now one game back in the AFC West standings, the Chiefs can’t risk entering Week 4 on the road in Philadelphia as the last-place team in the division. It could be another close Chargers vs. Chiefs matchup, much like last year’s overtime game early in the season.

How to watch Chargers vs. Chiefs this week