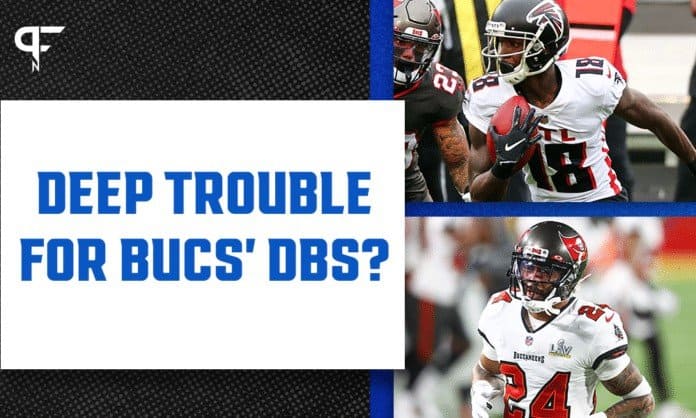 With Carlton Davis questionable due to a hamstring injury, Matt Ryan, Calvin Ridley, and the Falcons' offense should be ready to fly.

When the Tampa Bay Buccaneers announced Friday that cornerback Carlton Davis is questionable for Sunday’s game against the Atlanta Falcons, we pictured Calvin Ridley sidling up to a fine dining table, tucking the tablecloth under his chin, and using his fork to sharpen his knife.

Put simply, Ridley is in line to absolutely feast against a Buccaneers’ secondary that has question marks even when healthy. And in Week 2 of an 18-week NFL season, Tampa Bay is far from healthy.

Cornerback Sean Murphy-Bunting is out indefinitely after dislocating his elbow during the league’s season-opening showcase. For now, team doctors have decided against surgery to repair the gruesome in-game injury.

When will Murphy-Bunting, a former second-round pick, return to the lineup?

“Anyone’s guess as far as how long,” Buccaneers coach Bruce Arians said Friday. “… We hope we can get him back sometime.”

Murphy-Bunting wasn’t exactly an All-Pro in 2020 — he allowed 6 passing touchdowns and 12.2 yards per completion. But he probably was the Buccaneers’ second-best cover corner entering the season behind Davis.

However, both are hurt, and there’s at least a 50-50 chance neither will play in Tampa Bay’s home affair with the Falcons.

Davis’ hamstring flared up late in the week. After being a full participant in practice Wednesday and Thursday, he only worked on a limited basis Friday, prompting the questionable designation.

What does this mean for Matt Ryan and Calvin Ridley?

If Davis can’t go, the Falcons would have every incentive to let Matt Ryan air it out on pretty much every down.

The Dallas Cowboys proved last week that the Buccaneers’ defense is vulnerable when you spread them out. Dak Prescott roasted them for 403 yards and 3 touchdowns. Amari Cooper was unguardable, catching 13 of 17 targets for 139 yards and 2 scores.

Davis, meanwhile, was pretty much the only Buccaneers’ defensive back who held his own, allowing just 4 of the 10 balls thrown his way to be completed.

If he can’t go, it’ll presumably be Jamel Dean and Ross Cockrell on the boundary. As of Friday afternoon, Dee Delaney was the only other corner on Tampa’s active roster.

Prescott picked on Dean for 6 completions and a touchdown on 9 targets, generating a passer rating of 125.2. Cockrell (6 of 8 for 63 yards, a touchdown, and 137.0 passer rating against) was even worse.

That’s the perfect formula for Ridley to thrive after catching 5 balls for 51 yards in a Week 1 loss to the Eagles.