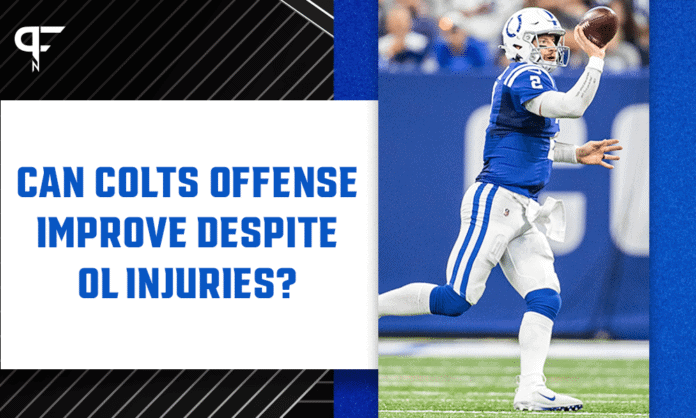 Can the Colts’ offense improve despite offensive line injuries?

The Colts' offense struggled on Sunday, and now they battle injuries on the offensive line and at wide receiver. Can they fix the offense?

By Dalton Miller
September 19, 2021
What's in this article? Click to show
Colts’ offense struggles versus Seattle
Colts’ offense dealing with injuries
Can they turn this around?

It’s not groundbreaking analysis to say the Indianapolis Colts’ offense struggled on Sunday against the Seattle Seahawks. The Colts’ offensive line had issues, and now injuries are takings their toll on Indy’s depth chart. What exactly went wrong against the Seahawks, and can the Colts put together and execute a game plan against the Rams (and further into the future)?

Compared to the rest of the league, there wasn’t a single point of offensive efficiency the Colts were competitive in. They were half a yard worse per rush than the league and 1.13 yards worse through the air.

But why did they struggle, particularly against a Seattle defense many didn’t have faith in to start? Last season, the Seahawks were 20th in passing efficiency on the defensive side of the ball.

Well, unfortunately, everything was bad, at least for spurts.

Carson Wentz time traveled, but not far enough back

The magic we once saw in short spurts from Wentz early in his career seems to have disintegrated over time. Nevertheless, the Colts’ offense was hopeful they’d get the old Wentz in a new environment.

In Week 1, however, they didn’t get the old Wentz. Except they sort of did.

This play is reminiscent of the old Wentz. It’s partially what made him great and what eventually led him to fail in Philadelphia. It reminded me of “The Quarterback Who Never Says Die.”

Years ago, Benjamin Solak wrote about the quarterback who doesn’t give up on making the play instead of simply making a play. It’s given us Wentz’s best plays and also the ones that force us to question his sanity along with his long-term health.

Twitter buzzed Sunday, wondering why a Colts quarterback was under such siege on Sunday. It hadn’t happened seemingly since the addition of Quenton Nelson and the emergence of Braden Smith at right tackle.

The offensive line did Wentz no favors

Julién Davenport simply does not have it. Ryan Kelly got demolished by Bryan Mone on an RPO. Wentz got the ball off, but he took an awful shot in the process. Even Braden Smith struggled on multiple rushes, particularly on the fourth-down sack that Darrell Taylor ran him over en route to Wentz.

But even there, Wentz had a back in the flat. However, from 30,000 feet, it’s impossible to know where Wentz was in the progression. It’s not like he was back there for three seconds before the hit.

The receivers failed to separate

If it wasn’t Wentz playing hero ball or the offensive line playing the role of saloon doors, it was the receiver’s lack of separation that hurt the Colts’ offense. Zach Pascal was about the only receiver to get open with relative consistency, but even when he would, another phase of Indy’s offense would let him down.

We always knew they’d rely heavily on Nyheim Hines and Jonathan Taylor out of the backfield, but they were the Colts’ two leading receivers in both yards and targets.

Smith isn’t playing against the Rams per the NFL injury report. They’re still unsure about the status of Nelson, and Eric Fisher is in the same boat as he returns from his Achilles injury. That’s not all, either. Both Michael Pittman Jr. and Parris Campbell are questionable. Compared to the Rams, it looks like the Colts are just finishing up the Ten Years’ War.

Against Jalen Ramsey, Aaron Donald, and Darious Williams, there’s a chance this offense is completely annihilated by the end of the contest. In what looks to be a completely shaky AFC South, simply surviving with their health could be a win for the Colts in Week 2.

Can they turn this around?

It’s an uphill battle for the Colts’ offense. They have recently survived through efficient decision-making and quicker passing concepts. Philip Rivers had the ball out in 2.5 seconds, and he still threw the ball farther downfield than Wentz did in Week 1.

In addition to the Colts’ offensive injuries, the defense is struggling with health as well. Xavier Rhodes is out for the game. Both starting safeties are questionable, along with rookie edge rusher Kwity Paye. Their two best defenders (unless you believe Kenny Moore deserves consideration) in Darius Leonard and DeForest Buckner both popped up on the injury report as well.

It might take some time. The Rams are a better team, and the Colts probably lose in Week 2. Additionally, their schedule appears absolutely brutal outside of the AFC South opponents.

It wasn’t all bad. The Colts’ offense moved the ball well on the first drive. Then, after they struggled on their next drive, they marched down the field on their third drive for another touchdown. Wentz was calm, decisive, and even impressive off-platform. But as the game wore on, bad habits crept back into view.

Wentz will have to settle down and at least occasionally take the first read in rhythm if it’s open. If Smith returns healthy and Eric Fisher is serviceable on the left side, the Colts’ offensive line will survive despite injuries. But be warned, Wentz will make them look worse than they are, so maybe, just maybe, he can make the play.

Nevertheless, somebody has to win the AFC South.