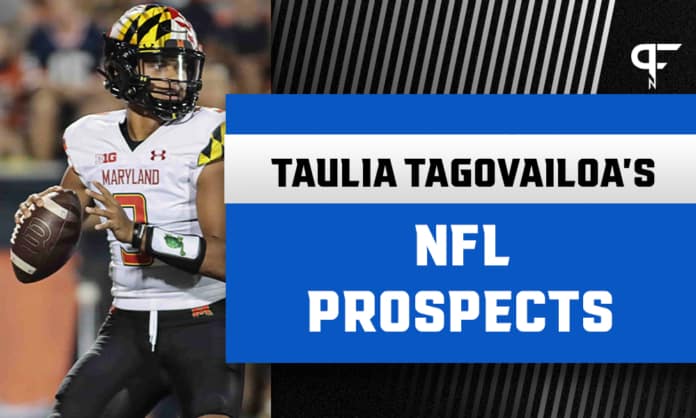 After a hot start to the 2021 season, can Maryland QB Taulia Tagovailoa rise and become a legitimate 2022 NFL Draft prospect?

We’re barely two years removed from the #TankForTua movement, and already, another member of Tua’s family is nearing the NFL stage. Maryland QB Taulia Tagovailoa is too busy racking up stats to worry about the NFL Draft. But soon, it may be the next step for the rising quarterback.

The start of Taulia Tagovailoa’s career

The name “Tagovailoa” is quickly becoming synonymous with “quarterback.” It’s not often that throwing a pigskin across a painted field becomes a family business, but the Tagovailoa’s have made that theirs. And Taulia is the heir to the college empire.

Taulia Tagovailoa grew up in Hawaii but would eventually find his way to Thompson High School in Alabama — the capital of the college football world. At Thompson High, he rewrote the record books, both for his school and his state. Among other things, Tagovailoa became the state’s first QB to throw for 400 yards in a game on four separate occasions. He also cracked the 500-yard mark once, joining an exclusive group of only 10 QBs before him.

With his success, the 5’11”, 200-pound Tagovailoa became a coveted recruit in the 2019 class. Listed as a four-star prospect, Taulia would eventually join the Alabama Crimson Tide. However, after just one year as a backup to Mac Jones, Taulia ended up transferring. He saw no future at Alabama behind Jones in 2020 and five-star signee Bryce Young in the years beyond.

Tagovailoa didn’t start right away for the Maryland Terrapins in 2020, but eventually, poor quarterback play forced the signal-caller into action. His first game was a rough 3-interception outing. But after that, Tagovailoa passed for 917 yards, 7 touchdowns, and 4 interceptions in the remaining three games he played. He also ran for 44 net yards and 2 scores.

Thus far in 2021, Tagovailoa has been up and down. The Maryland QB threw for 332 yards and 3 touchdowns in the season opener — a win against West Virginia — effectively setting the tone for what appears to be a career-defining campaign. Through the first four games, Tagovailoa logged 1,340 passing yards, 10 touchdowns, and just 1 interception. In Week 4, Tagovailoa amassed 384 yards and 3 scores against Kent State blowout. By that point, he’d already surpassed his totals from 2020.

A Week 5 clash against Iowa, however, halted Tagovailoa’s momentum with intense suddenness. The Maryland QB completed just 16-of-29 attempts for 157 yards. He threw for 2 touchdowns but was intercepted 5 times by Iowa’s swarming defense. He’s still on pace to have career marks this year, but he now has 6 interceptions in five games.

The turnover numbers hint at a deeper imperfection in Tagovailoa’s game — though not an unexpected one. Tagovailoa is still young, and he can be easily exploited by talented defenses like Iowa’s. As he grows mentally, learns how to handle pressure, and learns which risks can be taken and which cannot, he should start to see improvement.

If you thought you’d seen Taulia’s last name before, your suspicions are confirmed. Yes, Taulia is the younger brother of Tua Tagovailoa, the starting quarterback of the Miami Dolphins. Taulia joined Tua at Alabama for the 2019 season. He missed out on any national championships — bisecting triumphant campaigns in both 2018 and 2020. But the trade-off was that he was able to find an opportunity to start and thrive elsewhere.

Taulia is trying to follow the example his brother set at Alabama. Tua broke out for the Crimson Tide in 2018, amassing 3,966 yards, 43 touchdowns, and 6 interceptions while completing 69% of his passes. Tua was the Heisman runner-up in 2018 and leveraged another strong season a year later into a top-five selection in the 2020 NFL Draft. Things haven’t worked out yet for Tua in the NFL, but at the very least, he reached the pinnacle as a prospect. Can Taulia do the same?

Is Tagovailoa an NFL prospect?

Given the trajectory of his brother’s career, Taulia Tagovailoa is naturally going to be discussed as a potential NFL Draft prospect in the years to come. Luckily for the younger Tagovailoa, he seems at least deserving of that consideration after his hot start to the 2021 season. He’s still flawed, as the Iowa game showed. Thus, he may not declare for the 2022 NFL Draft. But he’s at least trending up, and he displayed progression in his earlier games.

Tagovailoa clearly has some natural ability at the quarterback position. He can generate great velocity when he’s in rhythm, and he’s also an exceptional athlete. Another promising aspect of his game is that Tagovailoa doesn’t rely on his athleticism or rush to scramble out of clean pockets. Stylistically, he’s a passer first, but he has the athleticism to evade and create.

Going further with his traits, Tagovailoa has a strong, stocky frame and a crisp release. That release can be winding and concentric at times, however. Additionally, his mechanics still have room for more consistency. Nevertheless, Taulia appears to have a degree of natural accuracy. It’s a trait that his older brother was revered for throughout the 2020 NFL Draft cycle.

Tagovailoa has talent but must prove he can sustain success

Tagovailoa isn’t one of those college quarterbacks who gets by just handing the ball off. He has some legitimate utility as a passer. Through five games, his talent has flashed, but he’s also showcased decisiveness, proper decision-making, and the ability to read the field.

Nevertheless, Tagovailoa’s profile isn’t without its flaws. As mentioned earlier, his mechanics and mental processes still have room for further refinement. His maximum arm strength remains a minor question. His velocity doesn’t always drive down the field, and some passes drop before they reach their targets. He also doesn’t respond with consistency against pressure, and forced passes can result in costly errors. His Iowa game was proof of that.

Still, Tagovailoa has talent. And with explosive receiver Rakim Jarrett in his arsenal, he has the weaponry to fuel a larger ascent. But the toughest tests remain in front of him. Over the remaining stretch in 2021, Tagovailoa plays Ohio State, Penn State, Michigan, Rutgers, and Michigan State. All of those teams boast formidable defensive units with NFL talent. And as the Iowa game showed, he’s not yet ready to withstand adversity on his own.

If the Maryland QB can grow through that tough stretch, then the 2022 NFL Draft is very much on the table. More likely than not, however, he displays ups and downs and enters the 2023 cycle as a prospect to watch.