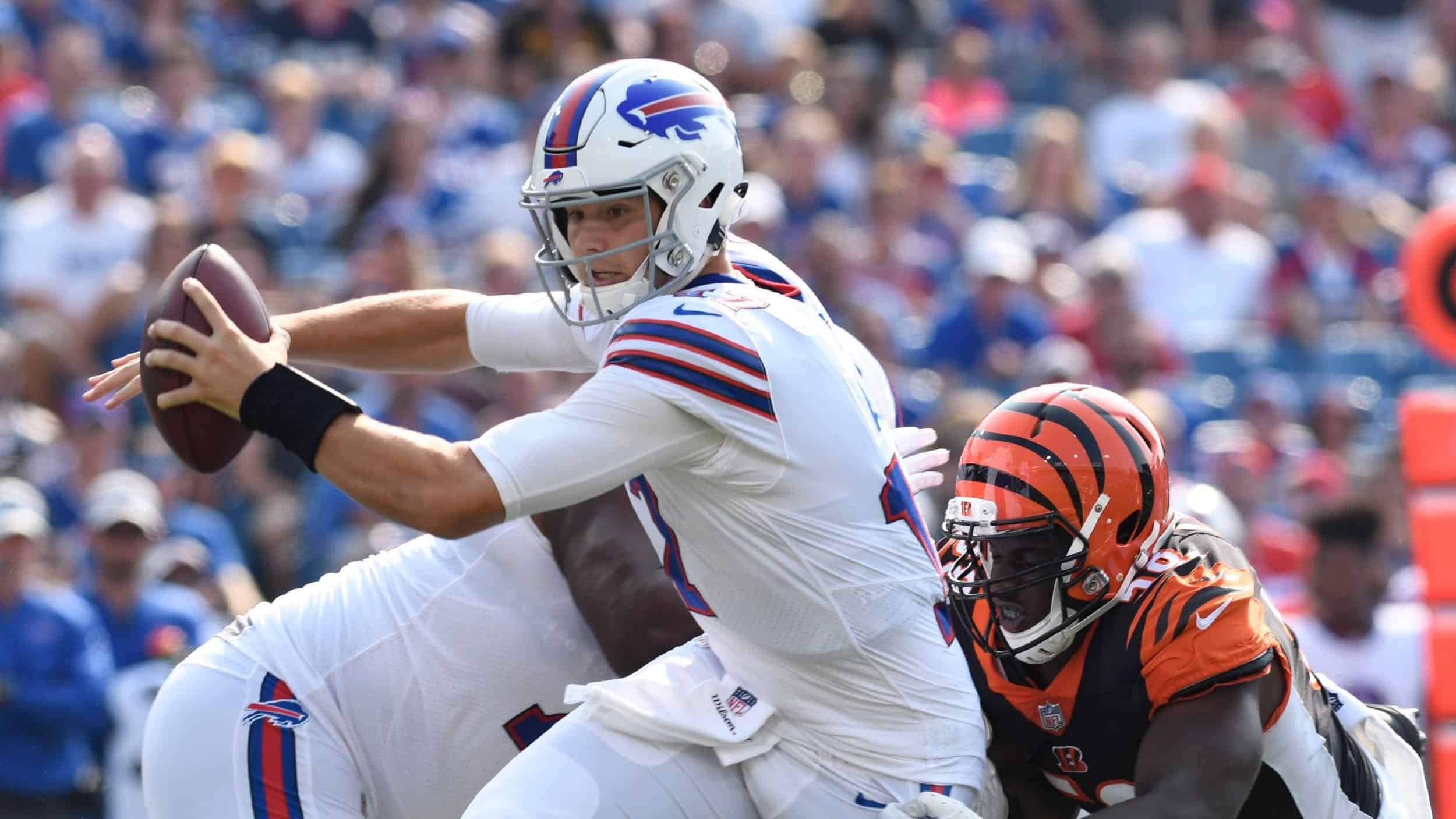 Photo Credit: USA Today
What's in this article? Click to show
After breaking a 17-year playoff drought in 2017, the Buffalo Bills took a step back last season. But with a young quarterback, lots of cap space and ten picks in the NFL Draft, the Bills are poised to make the necessary moves and return to the playoffs in 2019.
Offensive Needs
Defensive Needs
Cap Situation
Draft Capital
Draft Strategy

After breaking a 17-year playoff drought in 2017, the Buffalo Bills took a step back last season. But with a young quarterback, lots of cap space and ten picks in the NFL Draft, the Bills are poised to make the necessary moves and return to the playoffs in 2019.

The Buffalo Bills have no shortage of needs heading into the 2019 offseason. The team’s point differential in 2018 was -105, the 5th worst mark in the league. Buffalo finished 28th in Football Outsiders’ DVOA and 31st in Pro Football Focus’ team rankings. Most of Buffalo’s needs come on the offensive side of the ball as the team was 31st in both offensive DVOA and PFF’s offensive rankings.

Quarterback is the one position on offense that is set for 2019. Josh Allen will be the week 1 starter. And for him to progress, he will need massive upgrades on his side of the ball.

Simply put, the Bills need “everything” on the offensive side of the ball. They finished 2018 31st in offensive pass DVOA and 24th in offensive rush DVOA.

Buffalo owned the 26th ranked offensive line last season according to PFF. The first move the team has made to address this issue was to sign Spencer Long to a three-year contract. The signing is uninspiring. Long received a 43.7 pass blocking grade last season from PFF and was released by the OL-needy Jets earlier this offseason. That alone is a red flag.

The team may run it back with Dion Dawkins at left tackle. But if an upgrade is available, the Bills should still pounce. Dawkins regressed in his second season but is young enough to provide the team with some optimism moving forward.

LeSean McCoy is a prime candidate to be a cap casualty. Releasing the 31-year-old running back would save the team $6.43 million in cap space. McCoy is no longer worth his bloated salary. Should the Bills keep him around for 2019, McCoy’s $9.05 million cap hit would be the third largest at the running back position, despite the fact he finished 46th in DYAR in 2018.

Buffalo’s leading receiver last year had a whopping 652 yards. Only two receivers on the team cracked the 500-yard mark. Any available upgrade at wide receiver or tight end, particularly after the release of Charles Clay this offseason, should be of great interest to the Bills.

The Bills’ defense may have been the best-kept secret in the NFL last season. The unit finished 2nd in defensive DVOA, with a split of 2nd in pass defense and 14th in rush defense.

Their elite pass defense is the result of an outstanding secondary, anchored by stud cornerback Tre’Davious White. In 2018, White allowed only 357 yards in his coverage area, the 12th fewest among corners that saw a minimum of 40 targets. Opposing quarterbacks posted a 75.6 passer rating when targeting White.

In fact, White’s coverage stats are eerily similar to Patrick Peterson, according to PFF:

Despite their defensive success in 2018, the Bills could upgrade their pass rush. They finished last year 18th in adjusted sack rate, and 26th in total sacks. Jerry Hughes led the team with only 7 sacks.

The organization is also losing Kyle Williams to retirement. One of the team’s best run defenders, Williams had the third most sacks on the team last year as well. His absence may cause a middle of the road run defense to fall to below average if not adequately replaced.

After accounting for the team’s projected draft pool, the Bills are looking at $67.68 million in cap space this offseason. What’s more, that number can easily climb higher. As mentioned above, cutting McCoy would free up another $6.43 million. Additionally, cutting ties with Chris Ivory would free up another $2.15 million. Moving on from both running backs would leave Buffalo with $76.26 million in cap space.

The Bills will also be able to take advantage of the NFL’s biggest cheat code at the moment – a quarterback on a rookie scale contract. Josh Allen is under cost control for at least another three seasons. Each of the last two NFC Super Bowl participants loaded up their entire roster around a quarterback on a rookie deal. The New York Jets might copy that playbook this offseason. The Dallas Cowboys appear to have finally gotten the memo after the in-season acquisition of Amari Cooper.

Unfortunately for the Bills, the strength of this free agent class is defense rather than offense. Theoretically, they could be the one that splurges on Le’Veon Bell. But their money could be better spent elsewhere.

Additionally, the Bills were reportedly in trade talks with Pittsburgh Steelers last night for star wide receiver Antonio Brown. Landing Brown would have instantly improved Buffalo’s offense and gave their young quarterback a truly elite target. But Adam Schefter has reported this morning that the Bills are out of the Brown sweepstakes.

Bills’ GM Brandon Beane: “We inquired about Antonio Brown on Tuesday, and kept talks open with the Steelers. We had positive discussions, but ultimately it didn’t make sense for either side. As great a player as Antonio Brown is, we have moved on and our focus is on free agency.”

The Bills can afford any free agent that hits the market. Buffalo could add Trey Flowers or Sheldon Richardson to an already elite defense. Either Rodger Saffold or Trent Brown would be a tremendous addition to the offensive line while a slot weapon like Golden Tate or Randall Cobb would be immensely beneficial to Allen’s development.

According to the Chase Stuart draft value chart, the Bills have the 5th most draft capital in 2019. If you prefer the antiquated Jimmy Johnson trade chart, Buffalo still ranks 9th in draft capital.

Here is a breakdown of their draft picks:

It should be noted that based on the aggression shown during the 2018 draft, trading up is a distinct possibility for the Bills.

However, just like free agency, the strength of this draft class is defense, and the Bills need offense. On the bright side, given the immense defensive talent at the top of the draft and what appears to be only two first-round worthy quarterbacks, Buffalo may have their pick of any non-quarterback offensive player in the entire draft in round one.

It is too early to project what direction the Bills will go in the first round, as free agency will largely impact what players are targeted with that pick. It is fair to say if there is a receiver or tight end the team is over the moon about, then regardless of what takes place in free agency Buffalo would undoubtedly pull the trigger on him.

The trade up for Tremaine Edmunds in last year’s draft should raise concerns about how general manager Brandon Beane makes decisions. Beane traded picks 22 and 65 for picks 16 and 154. He dropped 89 spots later in the draft to move up six spots to draft an off-ball linebacker, all while netting a negative 3.5 points worth of draft capital. That is the equivalent of the 132nd pick of the draft. Put another way, Beane lit the 132nd pick of the draft on fire to move up for an off-ball linebacker – not for a pass protector or a receiving weapon to support the quarterback he drafted just moments before. Nor was the trade up for a premium defensive position like a pass rusher or a cover corner. No, an off-ball linebacker.

In fact, Beane spent the next four picks following the Josh Allen selection on defensive players. He did not take an offensive player until late in the 5th round when he chose guard Wyatt Teller.

Here’s to hoping Beane will prioritize surrounding Allen with as much talent as possible in both free agency and the draft, much like the Chicago Bears last year. Supporting their young franchise quarterback is how the Buffalo Bills can return to the playoffs in 2019 and build sustainable success.