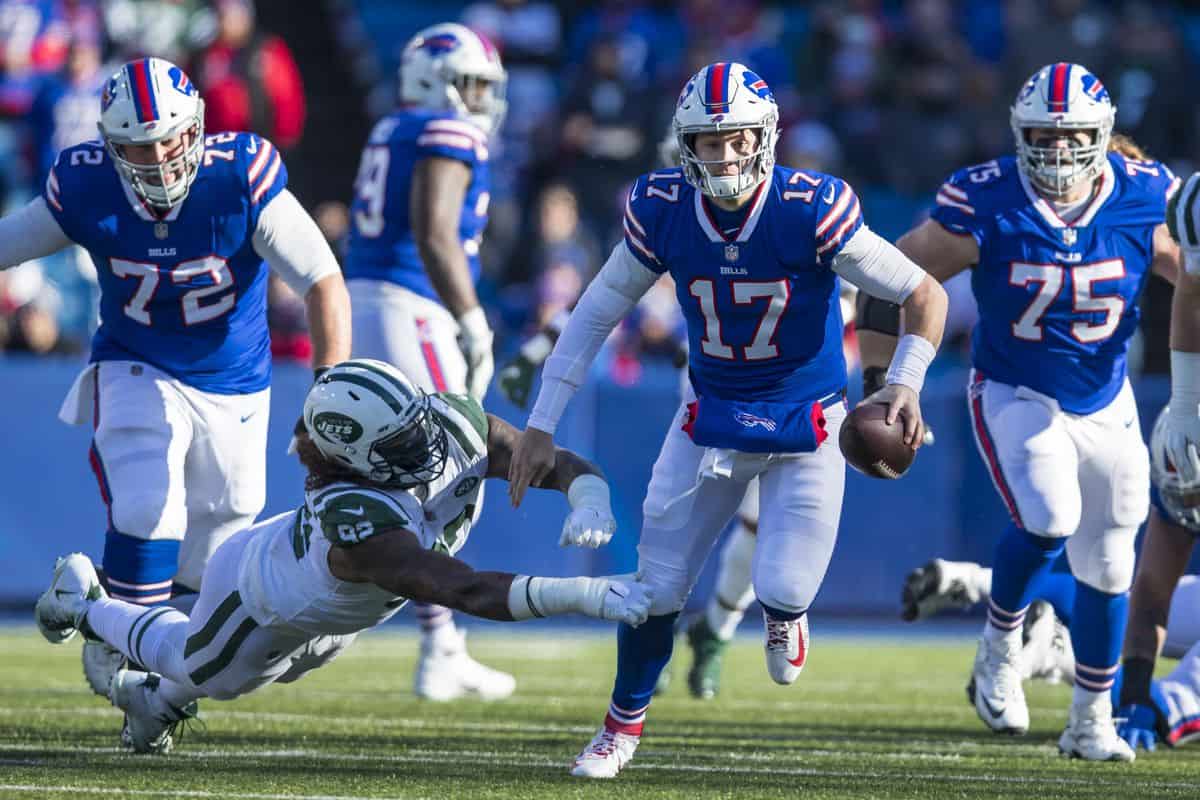 Photo Credit: SB Nation
What's in this article? Click to show
Josh Allen struggled as a passer in 2018
Allen was the best running quarterback in the NFL last season
The Buffalo Bills offseason signings should help Josh Allen
The veteran skill position players the Bills added are still talented
The Bills need Josh Allen to improve in 2019

Many people had their doubts about Josh Allen as an NFL prospect. There were plenty of reasons to like him though, and they’re ultimately why the Buffalo Bills decided to move up in the 2018 NFL Draft to get him. His talent was undeniable, even when playing against weaker competition in the Mountain West Conference. Allen was gifted physically, more so than any other quarterback in his draft class. He had excellent mobility and phenomenal arm strength. But Allen was also very raw and often struggled with accuracy. He would clearly need time to develop once he was drafted.

Some analysts were concerned that he would never improve enough as a passer to play at an elite level. But during his rookie season with the Bills, Allen showed a great deal of promise. It would be a stretch to say that he proved all of his doubters wrong because he certainly struggled in ways that many anticipated prior to the draft. But he played well enough to give Bills fans reasons for optimism. The question now is whether or not he can build on that early success in subsequent seasons.

Josh Allen struggled as a passer in 2018

As many suspected would be the case, Allen left much to be desired as a passer during his first season. He threw for just 172.8 yards per game, while only completing 52.8% of his passes across his 12 appearances. He also threw just ten touchdowns and twelve interceptions. Even by rookie quarterback standards, those numbers are (to put it kindly) not very good.

His Pro Football Network Offensive Share Metric (OSM) grade was also absolutely abysmal. This grade reflects how much an individual player did with the tools they had available to them. It looks exclusively at factors that the player directly controlled, while ignoring external factors, such as the talent of the players around them.

And Allen’s grade of 15.1 was the third-worst among qualifying quarterbacks in 2018, only scoring higher than C.J. Beathard and Blake Bortles. So, not only did Allen perform poorly as a passer statistically in 2018, but he also failed spectacularly to take advantage of the opportunities presented to him. If we were to look exclusively at his ability as a passer, Allen’s rookie season would be viewed as a complete disaster.

Allen was the best running quarterback in the NFL last season

Of course, looking only at Allen’s passing statistics fails to capture the full picture of his rookie season. He was undeniably the best running quarterback in the NFL in 2018, by a significant margin, leading the Bills in both rushing yards (631) and rushing touchdowns (8). That was the most rushing touchdowns and the second-most rushing yards by any quarterback last season. A few quarterbacks did produce similar statistics. Fellow rookie Lamar Jackson had 695 yards and five touchdowns, and Deshaun Watson managed 551 yards and five touchdowns.

But neither of them even came close to Allen in per-carry production. Jackson and Watson averaged 4.7 and 5.7 yards per carry, respectively. Meanwhile, Allen averaged an astonishing 7.1 yards per carry across 89 attempts. Only four quarterbacks in the NFL had a higher average, and none of them ran the ball more than 20 times. So, not only did Allen put up big numbers as a runner, but he was also incredibly efficient. If he can reach even a mediocre level as a passer, while maintaining his production on the ground, he could become an elite player and a cornerstone for the Bills franchise.

This offseason, the Buffalo Bills tried to speed up the development of their young quarterback by adding multiple pieces on offense. They improved their offensive line, one of the weaker units in the NFL last season, drafting Cody Ford in the second round, and signing three offensive linemen during free agency.

Additionally, they added a few notable skill position players: wide receivers Cole Beasley and John Brown, and running back Frank Gore. These players add a stronger veteran presence to the team, which should help Allen a great deal. Veterans generally make fewer mistakes, which will reduce the number of factors that he needs to worry about on any given play. Besides, while none of these players are superstars, they are all solid additions to a weak Bills offense.

Brown is the youngest of the Bills three skill position additions at 29. Despite playing on the run-happy Baltimore Ravens, Brown managed a decent 2018, with 715 total yards and an impressive 17.0 yards per reception, along with five touchdowns. His OSM grade was rather underwhelming at 24, in part because of his very low catch percentage of 43.3%, but his ability as a deep threat will help Buffalo take advantage of Allen’s incredible arm strength.

The other receiver, Beasley, isn’t as explosive as Brown, but he is a more reliable player. His production was almost as high, with 672 yards and three touchdowns. And while his 10.3 yards per reception was significantly lower than Brown’s, his catch percentage was much higher, at 74.7%. His OSM grade of 37 was also higher than that of any Buffalo receiver last season. Beasley’s consistent production should provide Allen with a target that he can rely on to make catches in critical situations.

And then there is the ageless Gore, who has managed to continue playing running back at a high level despite turning 36 this past spring. In a league where most running backs burn out before they turn 30, Gore is an anomaly. Despite splitting time with Kenyan Drake in the Miami Dolphins’ backfield, Gore ran for 722 yards at 4.6 yards per carry, in addition to 124 receiving yards. He also managed a respectable OSM grade of 30, higher than the Bills incumbent veteran running back LeSean McCoy. Between Gore and McCoy, Buffalo should have a solid, if not spectacular, running back tandem in 2019.

The Bills need Josh Allen to improve in 2019

Buffalo lost very few players on offense or defense during the offseason. Combined with their new additions, the Bills should be a strictly better team in 2019. But ultimately, Buffalo’s success is tied to the success of Allen himself. If he improves as a passer, then his ability on the ground will make him one of the most dangerous players in the NFL.

But if he doesn’t, then no amount of team improvement will be enough to carry the Buffalo Bills back into the national spotlight for the first time since Jim Kelly was their quarterback. After all, it doesn’t matter how good a team’s wide receivers are if their quarterback cannot complete passes to them. Running backs won’t find space if the opposing defense isn’t afraid of the pass. And defenses rarely win games on their own. Buffalo needs Allen to improve. If he doesn’t, nothing else they do really matters.

Lucas Ellinas is a writer for the Pro Football Network covering the PFN Data Lab. You can follow him @Lucas_Ellinas on Twitter.