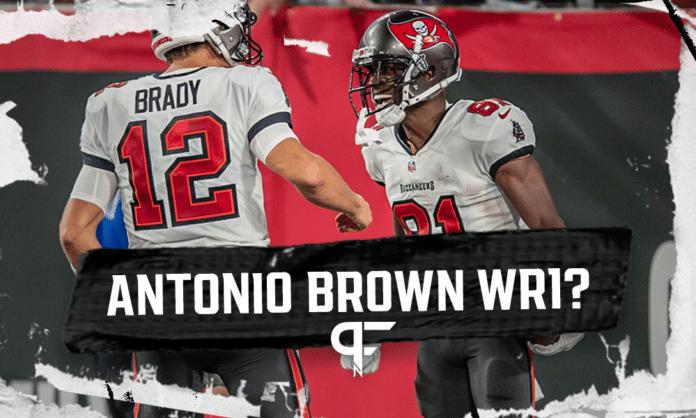 Antonio Brown produced a superb performance in the Tampa Bay Buccaneers' thrilling Week 1 win over the Dallas Cowboys, but is he their WR1?

By Adam H. Beasley
September 10, 2021
What's in this article? Click to show
Antonio Brown torches the Cowboys in the season opener
Journey to Tampa Bay
Brown is worth every penny

TAMPA, Florida — Antonio Brown is back, and the Tampa Bay Buccaneers better realize that and find a way to keep the WR on the field. There’s no other way to process Brown’s Week 1 throwback performance on national television. He racked up 121 receiving yards and a touchdown on just 5 catches in a thrilling showcase game against the Dallas Cowboys.

Antonio Brown torches the Cowboys in the season opener

Brown was the fastest player on the field, and he made the most of his limited opportunities. Brown led the Buccaneers in receiving yards despite logging some 20 fewer snaps than both Chris Godwin and a largely invisible Mike Evans, who had 3 catches for 24 yards on 6 targets.

“I love to play,” Brown answered Thursday when asked if he wants his role to increase.

Brown’s signature play of the night was a go route for a 47-yard touchdown late in the second half, which was as impressive as it was confounding — if you’re a Cowboys fan.

Boundary cornerback Anthony Brown had single coverage but showed no respect for AB’s speed. He lined up just 3 yards off the line of scrimmage, flat-footed, and allowed AB a free release off the line.

By the time the camera caught up with the Buccaneers WR downfield, he had a good 5 yards of separation. All it took was a moderately decent pass from Tom Brady to convert the touchdown. Brady did far better than that, hitting Brown in stride for six.

“I’m never surprised,” Brown said of Dallas’ decision to leave Brown on an island with one of the league’s fastest receivers. “I just react in the moment. Tom made a great throw. I just had to make a big play.”

It was Brown’s 80th career touchdown reception and fifth as a member of the Buccaneers, who threw his career a lifeline after Brown’s troubling behavior got him temporarily banished from the NFL.

Three teams purged Brown from their rosters in 2019 alone — the Steelers, Raiders, and Patriots all got tired of his act — and he became radioactive to the other 29 franchises when he was accused in a sexual misconduct lawsuit.

The NFL ultimately suspended Brown for the first eight games of the 2020 season for a separate violation of the personal conduct penalty. But football always makes allowances for talent, and Brown still has that even on the wrong side of 30.

He signed with the Buccaneers midseason in 2020, kept his head down, caught 45 balls over the final eight games, and won a Super Bowl.

“I’m still grateful,” Brown said. “I have an opportunity to do something that I love with a bunch of great guys in the locker room. I don’t take it for granted.”

Brown is worth every penny

Brown fit well in Tampa Bay, returning to the Buccaneers in 2021 on a one-year, $3.1 million deal, making him the third-highest-paid receiver behind Godwin and Evans. But on Thursday, he was second to none in terms of production.

He reminded the world what peak AB can do and isn’t worried about those who still might be sleeping on him.

“Keep them asleep,” Brown said. “Nobody likes to be woken up.”

Brown continues to rise up the NFL record books

Not that long ago, it seemed that Brown’s career was over. However, Thursday he moved further up the list of all-time receiving yards. His 121-yard performance saw him surpass both Don Maynard and Antonio Gates to move into 29th all-time. He is just 28 yards behind Michael Irvin (11,904) and will quickly have the likes of Derrick Mason, Hines Ward, and Charlie Joiner in his sights.

Brown also moved into a tie with Steve Smith Sr. and Art Powell for 28th place in career receiving touchdowns (81). Narrowly ahead of him are Anquan Boldin, Jimmy Graham, and Reggie Wayne with 82, as well as Calvin Johnson and Brandon Marshall with 83. With more performances like this, he could have the top 15 in his sight (Andre Reed, 87) very quickly.

You would not bet against this being Brown’s only multi-touchdown game this year. This is his 17th such game since the start of the 2014 season. Entering the year, he led the league in that stat, three ahead of Davante Adams during that timeframe.