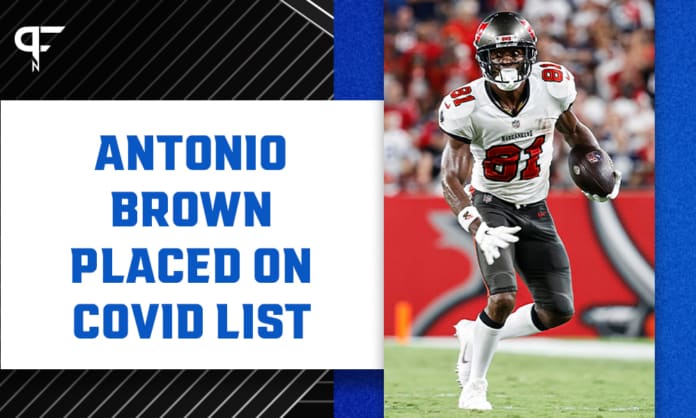 Tampa Bay Buccaneers WR Antonio Brown is a long shot to play against the Los Angeles Rams after going on reserve/COVID-19 Wednesday.

Antonio Brown is vaccinated, yet the explosive Tampa Bay Buccaneers wide receiver is still in danger of missing Week 3 because of COVID-19. Tampa Bay placed Brown on the reserve/virus list Wednesday, suggesting he has tested positive for the virus. Brown will need two negative tests at least 24 hours apart to play Sunday against the Los Angeles Rams.

That, based on recent history, seems unlikely. A positive test during the week almost always means the player will be unavailable that coming weekend. Consequently, the Buccaneers should plan on Brown being out in a game that has the makings of a shootout.

With Antonio Brown on COVID-19 list, Buccaneers’ WR depth will be tested

So expect a track meet Sunday — and based on health alone, the Rams have the advantage.

Cooper Kupp and Robert Woods are good to go. Brown, who has been Brady’s fifth-most targeted option behind Chris Godwin, Mike Evans, Rob Gronkowski, and Leonard Fournette, is not.

If Brown is unable to play, it certainly makes things interesting for Bruce Arians and Byron Leftwich. The Buccaneers don’t really use a fourth wide receiver. Tyler Johnson has been on the field for just 16% of the Buccaneers’ offensive snaps this season.

Which Bucs WR will step up in Week 3?

Three running backs (Fournette, Giovani Bernard, and Ronald Jones II) have all been targeted by Brady more this season than Johnson, a second-year player from Minnesota taken in the fifth round of the 2020 NFL Draft.

Jaydon Mickens and Scotty Miller are also options for a promotion as well, but they’ve played either exclusively or predominantly on special teams through two weeks.

Whoever takes those offensive snaps Sunday (assuming Brown cannot go) will have their hands full with a talented Rams secondary that features four-time Pro Bowler Jalen Ramsey (who has a 34.5 passer rating against in 2021) and Darious Williams (89.2).

“We’ve got plenty of good guys that have proven track records at that position,” Buccaneers coach Bruce Arians said Wednesday.