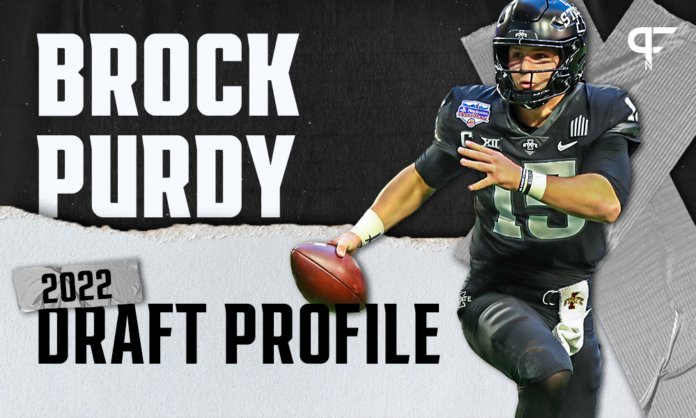 He's a beloved college football quarterback, but how does Iowa State QB Brock Purdy's scouting report translate to the NFL Draft in 2022?

Purdy Mania took over the Big 12 when a stout, scrappy Iowa State QB named Brock Purdy helped lead the Cyclones to wins over Oklahoma and TCU. Now, two years later, Purdy’s NFL Draft stock has deflated a bit, but the signal-caller still has a scouting report worth analyzing. What’s Purdy’s outlook heading into his senior season, and can he be an NFL starter?

The Iowa State Cyclones have developed into a contender over the past three seasons. And over the entirety of that span, Purdy has been Iowa State’s quarterback. Matt Campbell undoubtedly deserves individual recognition for turning around the program, but he also owes plenty of thanks to Purdy, who’s been the quintessential “good college quarterback.”

The obvious question with Purdy — one that comes with all good college quarterbacks — is whether or not he can be a good quarterback at the NFL level. He’s proven productive in the Power Five, but does he have the traits to earn a professional starting job and hold it down? Let’s take a look.

There are some things to like with Purdy, from a physical standpoint. The Iowa State QB has a strong build at 6’1″, 220 pounds, and he’s an above-average athlete. He has solid lateral mobility and escapability in the pocket, and he also has decent speed in the open field. Purdy is by no means an elite athlete, but he’s an upright runner who brings urgency, and he’s willing to put his head down to grind out yards.

Much like his athleticism, Purdy’s arm is fairly proficient. The Iowa State QB has the arm elasticity to generate some velocity off-script. With this elasticity, Purdy’s flashed the ability to push his velocity into the deep third, and he also has enough arm strength to fit the ball into tight windows. Purdy has natural touch and loft on his throws, and he’s shown he can throw receivers open in the short and intermediate ranges.

The Iowa State product has a solid allotment of physical traits and uses them with decent efficiency. He has a crisp throwing motion and smooth mechanical synergy. Additionally, Purdy is aware of how feigning the run can open up routes. He’s flashed this functional awareness on more than one occasion.

Consistency is still an underlying concern for Purdy, but he’s displayed several redeeming traits on the operational front. Most importantly, he’s demonstrated the capacity for a number of vital professional functions. Purdy has good general awareness. He shows the ability to go through his progressions and make decisions quickly when he’s asked to. He also keeps his eyes up, remains aware of his receivers on rollouts, and is patient off-script.

Purdy can use his eyes to freeze safeties and keep spaces open. He has a sense of timing (and solid natural accuracy when he’s in rhythm) in the short and intermediate ranges. He’s tough in the pocket and willing to take big hits to get passes off. Overall, the Iowa State signal-caller has a gritty gunslinger mentality — his competitive nature isn’t an issue.

Circling back to his mechanics, Purdy has a relatively high floor. There are some things he can clean up. Nevertheless, he knows to bring his shoulders around and reset his base before throwing.

Purdy is a fun prospect, but that compliment is somewhat double-edged. Encased within the word “fun” is an undertone of volatility — something that’s only gotten worse since his breakout 2018 campaign.

First off, Purdy’s accuracy, while solid closer to the line, wanes at times. He doesn’t always utilize proper placement down the field relative to receiver leverage. Furthermore, he can employ better precision and leverage awareness in 50-50 situations. The Iowa State QB sometimes doesn’t position the ball well for yards after the catch. While often compact, his release can be winding at times, impacting his release point and precision.

Mentally, Purdy can improve his consistency as well. He sometimes tries to force the ball in where receivers have little leverage. He’ll try especially hard to force plays under pressure at times, and this can lead to opportunities for a defense. Purdy may take dangerous chances throwing across his body when rolling out, and he’s more confident in his arm than he should be at times. He doesn’t have the arm elasticity to get away with throwing off his back foot, and his velocity doesn’t consistently carry to the intermediate and deep ranges.

Among other things, Purdy can navigate the pocket better when under pressure, as he sometimes works himself into congestion. He occasionally double-clutches when surveying his options, delaying his trigger. Moreover, Purdy throws many schemed, quick-game passes, and he could use more progression work. He doesn’t throw with much anticipation at this point.

Purdy is a legitimate NFL Draft prospect. However, what’s up for debate is what kind of upside he possesses and where he should ultimately go. Physical traits rest on a spectrum, and Purdy is on the right side of that spectrum. He has above-average athleticism and an above-average arm. Still, neither of those traits are elite. In fact, one could argue that Purdy has no elite traits.

Thus, while Purdy has some measured upside, his NFL ceiling isn’t astronomically high. If Purdy can improve his ball placement, decision-making under pressure, and overall consistency, he could enter the early rounds. Yet, right now, Purdy is likely an early-to-mid Day 3 prospect.

Purdy Mania isn’t just a college thing. Purdy had high school coaches swooning over his production the same way in 2017. As a senior at Perry High School in Gilbert, Arizona, Purdy put up record-breaking numbers. The 6’1″, 197-pound quarterback completed 238 of 368 attempts for 4,405 yards, 57 touchdowns, and just 9 interceptions. He also ran for 1,016 yards and 10 scores.

Despite his production, Purdy was only a three-star recruit on ESPN’s board. Nonetheless, many schools saw him as a potential diamond in the rough. He received offers from a wide range of programs — from Northern Arizona to Alabama –but ultimately decided on Iowa State, an upstart program led by Matt Campbell.

The Cyclones held Kyle Kempt and Zeb Noland from the previous season, but Purdy would steal the starting job as a true freshman in 2018. In his first college football season, Purdy exploded onto the scene, accumulating 2,250 yards, 16 touchdowns, and 7 interceptions in 10 games (eight starts). He averaged a stellar 10.2 yards per attempt and added 5 touchdowns on the ground.

2019 was another stellar campaign for Purdy. Although his yards per attempt dropped to 8.4, he completed 65.7% of his passes for 3,982 yards, 27 touchdowns, and 9 picks while adding 8 more scores as a rusher. Purdy’s strong play thus far made him an early 2021 NFL Draft prospect to watch. At one point, he was viewed in the same class as Trevor Lawrence, Justin Fields, Trey Lance, and Kyle Trask.

Unfortunately for Purdy, 2020 was an up-and-down year, and the Iowa State QB was not immune. In the disrupted season, Purdy generated career-low totals in yards per attempt (7.5) and QB rating (142.1). He put up decent raw numbers — 2,750 yards, 19 touchdowns, and 9 interceptions — and he also helped lead Iowa State to an impressive 9-3 record.

But on the field, the results were less consistent for Purdy. His stock fell, and Purdy opted to return to school and focus on the 2022 NFL Draft.

Entering the 2020 college football season, Purdy is in an interesting spot. He’s clearly an established presence at quarterback, but he’s also a bit of an afterthought. The Arizona native hasn’t shown the desired year-to-year progression that teams seek from NFL Draft prospects. Additionally, his physical traits aren’t in the elite tier, which sows some doubt regarding his upside.

Regardless, when things are clicking for Purdy, he has an exciting style. He’s tough, competitive, and he’s shown that he can push the boundaries a bit with his arm. It’s worth noting that Purdy hasn’t received much help from his supporting cast over the years. If Purdy can reclaim his downfield element and definitively elevate his team in Year 4 as a starter, he could earn the favor of NFL Draft evaluators once again.