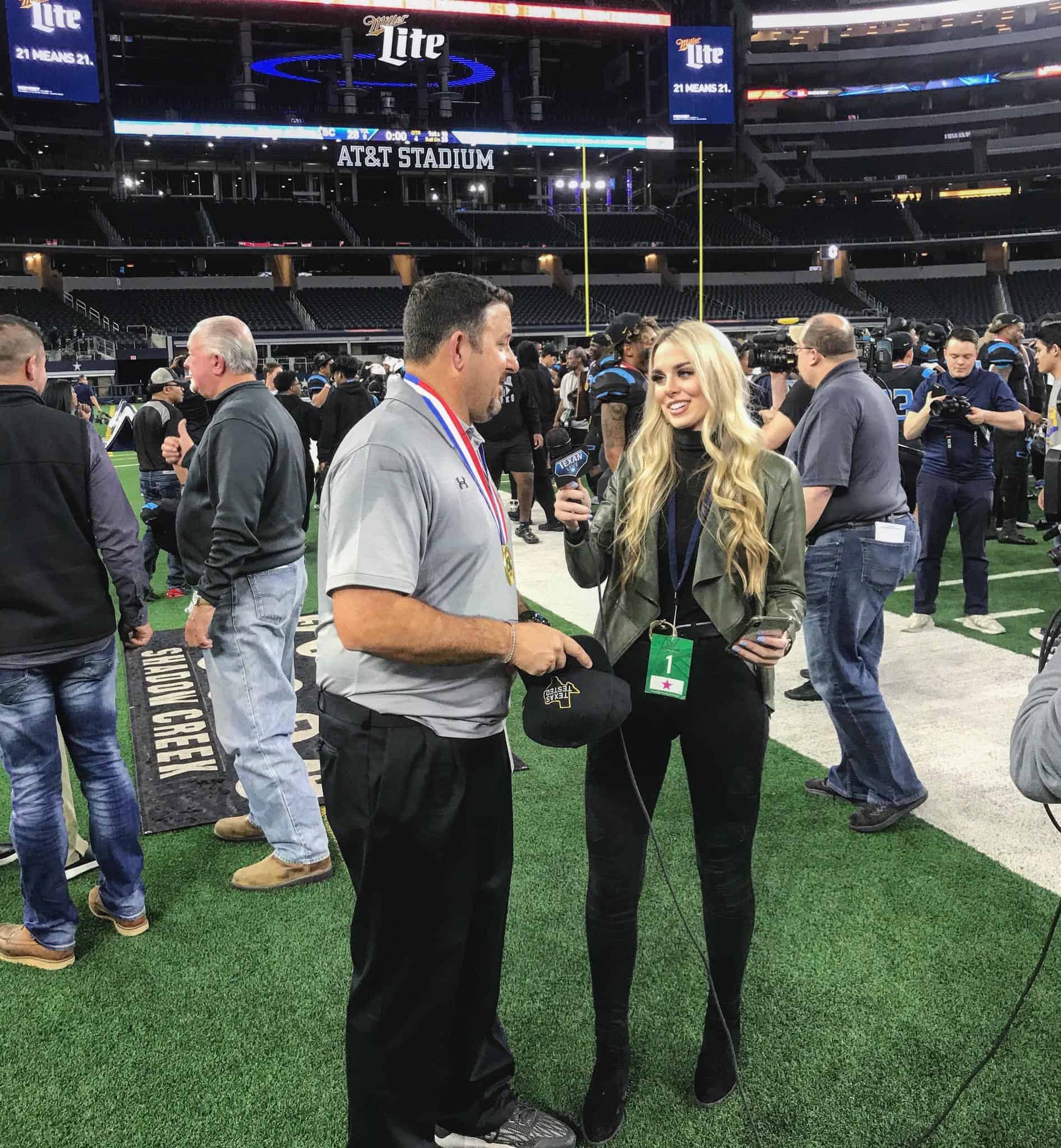 Covering high school football is one of the most challenging tasks a sports reporter can take on (in Texas, no less), given that there is no real PR or media relations department in most instances. This leaves the reporter to do a lot of the coordinating, stat keeping, along with several other things on their own that they don’t have to do because those jobs are assigned to a host of specific people in college and the NFL. Breanna Bryson shares her story in this installment of Women In Sports.

Breanna Bryson is one person who has started her career off by doing the gritty work — and you’re under even more scrutiny when you’re a female covering high school sports in Texas, where high school football couldn’t be more king than it is.

Women in Sports: Breanna Bryson and her work as a Texas high school sports reporter

Bryson currently works the sidelines for TexanLive, where she’s looking to build her career up even more.

The decision to work in sports wasn’t one that came to her quickly, yet it was at the same time.

“I went to college for three years for a completely different major related to health, and the whole time I was miserable. I always knew I wanted to be in sports. So, I just packed up and left one day. At first, I figured that I wanted to get into writing. I was working at that and then I started working in broadcasting.”

The day Bryson came to that decision occurred shortly after she had attended the NFL Draft in the media section.

“I said, ‘this is where I want to be.’ I went back to Oklahoma the next day and packed up my apartment and moved to Texas. I never looked back.”

The leap into the sports industry world

Breanna Bryson jumped into the industry without a defined direction and gave it her best shot with zero experience out of the gate. She’d elaborate:

“Someone actually put me on the spot to go on the sidelines and report for a game. That was the most terrifying experience of my life. It pushed me out of my comfort zone, but also made me realize that this is what I wanted to do.”

Like so many other reporters, Breanna Bryson has been affected by the implications of our global threat. She says she’s trying to get as many reps in as she possibly can, despite having to deal with high school games during the season constantly being canceled and having an unpredictable schedule in which opportunities could present themselves at any time.

“Back in March, I started covering basketball,” Breanna Bryson said. “That was the day everything shut down. We had 18 games over three days, and then by the fourth game they called it off. They just kind of said ‘All right, we’re done.’ But for those four games, I loved it. It took a while for me to get back into sideline again, but when I was able to get back out and cover a football game, it put the fire in me again. It’s a feeling of really wanting things to get back to normal. But then, like I said, there are the roadblocks with not being able to cover certain games.

With everything going on right now, I can’t even cover state championships next week, because they’re not even allowing media to be on the field,” she said in November. “There are games you can’t cover, then one day I had a guy call me and ask me to cover a game the next day. I wasn’t even in town. So, it’s hard enough to cover a game as it is, but these things have made definitely made it more difficult as a younger reporter.”

A time to reflect

That doesn’t mean she hasn’t been able to make the extra time she’s had work in her favor, though.

I guess an advantage is that I’ve had more time to sit down and critique myself,” she said. “I’ve listened to people like Molly McGrath during quarantine doing their sideline stuff on Facebook Live. It’s been a time to work on my craft and build upon what I have.”

Women in Sports: Breanna Bryson and what she has accomplished

Bryson has enjoyed her time in Texas, covering high school football at the level she has.

“I think my favorite memory through it all was last year’s high school football championships in Texas,” she said. “I’m sure you know the argument that it’s just better in Texas, and it definitely is. I remember walking onto the field and on the sidelines and feeling like I was just getting back to myself. It’s also great just how many people I’ve gotten to meet from my job.”

One key lesson Bryson says she’s learned is to genuinely enjoy what she does, regardless of how big her platform is.

“When I first started out in sports, it wasn’t that I was dreaming too big, but I was pushing for huge opportunities right out of the gate, and it’s harder to break in that way,” she said. “Getting into Texas high school football, and that’s the best thing I’ve ever done. It’s a big landscape with a lot of opportunity, but I have noticed there are not a lot of women covering sports. It’s hard being a young reporter, and you have to prove yourself and continue working at that.”

Bryson concluded with some humility: “I’ve set my focus to just being happy with what I’m doing and making a difference in what I do. It’s about the story, and it’s not about how big I can make it.”