The Browns have made significant upgrades to their offensive line from a year ago, but the right guard position will likely see a competition in 2020. 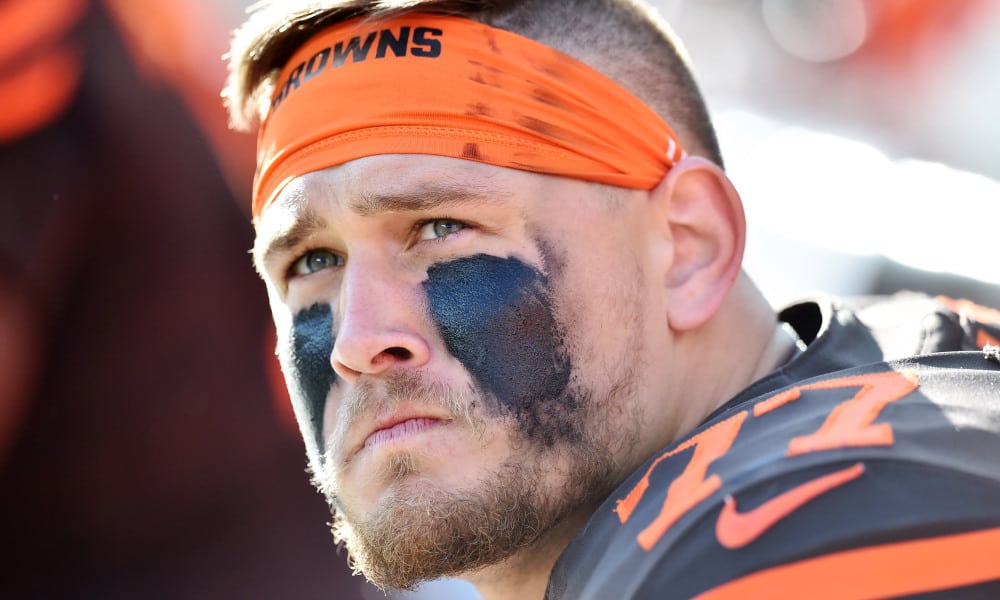 Oct 13, 2019; Cleveland, OH, USA; Cleveland Browns offensive guard Wyatt Teller (77) watches from the bench during the fourth quarter against the Seattle Seahawks at FirstEnergy Stadium. Mandatory Credit: Ken Blaze-USA TODAY Sports
What's in this article? Click to show
The revolving door in 2018 at right guard
Previewing the Browns’ right guard competition in 2020
Predicting the outcome of the Browns right guard competition in 2020

One year ago today, the Cleveland Browns were riding a high like none they had felt in years. However, looking at the starting offensive line, even heading into training camp, it should have been apparent struggles would have been on the horizon. While they have shored up most of their front, the Browns right guard competition in 2020 looks to be a wide open race.

In the matter of one offseason, the Browns went from starting Greg Robinson and Chris Hubbard at their offensive tackle posts to Wills and Conklin instead. Sacked 40 times a year ago, presumed franchise quarterback Baker Mayfield can breathe a bit easier in the pocket moving forward.

Pairing Conklin and Wills with the already established starters in left guard Joel Bitonio and center J.C. Tretter, the Browns now have a formidable offensive line on paper. There is just one hole left to fill at right guard moving towards training camp.

The revolving door in 2018 at right guard

A year ago, former Cleveland general manager John Dorsey brought in a handful of players he had past experience with such as tight end Demetrius Harris, and yes, right guard Eric Kush. Throughout training camp, Kush was the plugged in starter at that spot, holding out hope he could do just enough.

However, as final roster cut downs were underway, the Browns were able to acquire former fifth-round pick and rookie starter of the Buffalo Bills Wyatt Teller. Ultimately it was Kush who got the day-one job in Cleveland, but struggled (as did the whole team) throughout the first half of the season and was benched after the seventh game of the season.

After the struggles of Kush, Teller took over the starting job at the right guard position, and while he had his growing pains early in the season, improved throughout the year. By the end of the season, Teller can be seen driving the likes of Javon Hargreaves and Geno Atkins into the ground as he settled in.

If Teller settled into the role, then why is there a competition at all at the right guard position in 2020 for the Browns? With a new general manager and all new coaching staff, each player must prove their worth to the new guys in town, especially those who are not established starters.

As training camp is scheduled to begin in about two weeks, this will certainly be a top priority to figure out for the coaching staff. Certainly Teller will enter camp as the lead dog with the best chance to win the job, However there are a couple other players looking to take it from him.

Starting at right tackle a year ago, Chris Hubbard took his lumps throughout the year. However given he has always been a bit undersized for the tackle position, but possesses great athletic ability. The Browns plan to kick Hubbard inside to guard this year, and he will likely see a share of the starting reps throughout camp after taking a paycut to stay with the team.

Next in line is “Prospect X” from a year ago and former sixth round pick Drew Forbes. While he played at the FCS level with Southeast Missouri during his collegiate career, his athletic ability put him on the map of general managers, and Dorsey pulled the trigger a year ago after he posted an impressive 9.8 Relative Athletic Score (RAS).

Forbes was stashed on the injured reserve for the first chunk of the season ago, what may have just been a roster manipulation, but he never saw a start as a rookie regardless. However, working with one of the most renown offensive line coaches in Bill Callahan, and in a wide-zone offensive system, Forbes’ athletic ability may make him a prime candidate for a year-two jump.

While Washington center Nick Harris was selected in the fifth round of the 2020 NFL Draft, it would be a surprise to see him included in the right guard competition as a rookie. While he is nimble for an offensive lineman, his play strength is not to be desired; expect the coaching staff to give Harris a year to learn, grow, and put on weight before he becomes a contributor.

Predicting the outcome of the Browns right guard competition in 2020

It looks to be a three dog race between a veteran with his fair share of starting experience, a year-three pro who is still looking to establish himself as a consistent starter, and a year-two athletic specimen who could make a big leap. So who wins the job moving forward as the Browns’ 2020 right guard competition is set to get underway?

Hubbard and Forbes will be given opportunities to show their talents and stake a claim at the job as well, however this is Teller’s job to lose. Given Teller’s lateral movement and explosiveness he displayed at the combine, where he posted an RAS of 8.79 with elite numbers in tests that matter most to a wide-zone specific offensive lineman like 3-cone drill, vertical jump, broad jump, and bench press just to prove he has the play strength.

Teller will certainly be given his fair share of reps to keep the job after he began to gain chemistry with Tretter and Bitonio along the interior a year ago. He took a visit as a prospect to Washington when Callahan was the offensive line coach there, and there is reason to believe the new offensive line coach in Cleveland is fond of the third year veteran.

Look for Hubbard to serve primarily as a swing tackle and spot starter in case of injuries given his veteran status, and look for Forbes to make a push. However at the end of the day, it is hard to look past the film Teller put on the field the last half of the season, his more than able athletic build, and his viewing in the eyes of Bill Callahan when looking into the 2020 right guard competition for the Browns.