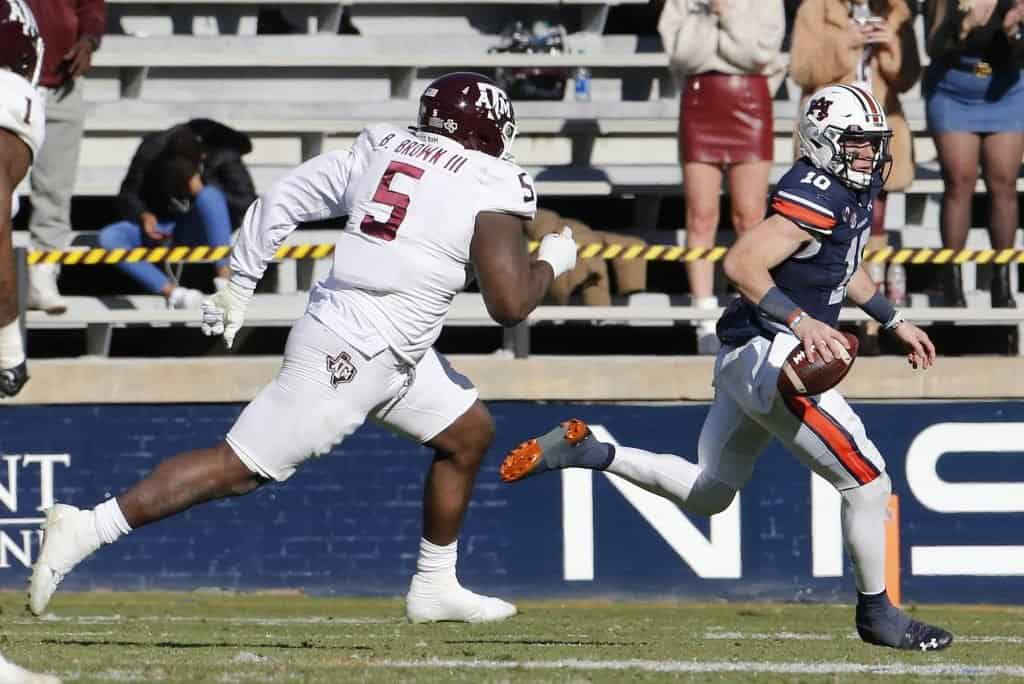 Day 2 is where the real value is at in this year’s defensive tackle class. Earlier this offseason, many viewed this class as weaker than usual. However, as the evaluation process has unfolded, more and more prospects have been uncovered beneath the surface. One NFL Draft prospect who embodies this progression is Texas A&M defensive tackle Bobby Brown. Once overlooked, Brown is starting to emerge, and he could become one of the steals from the 2021 NFL Draft.

Positives: Explosive three-technique tackle who plays with outstanding fundamentals. Fires off the snap, plays with excellent pad level, and draws the focus of opponents. Consistently gets leverage on blockers, shows agility, immediately alters his angle of attack, and redirects to the action. Moves well laterally chasing the play down the line of scrimmage. Aggressive. Tough to move off the point.

Negatives: Struggles getting off blocks. Easily knocked off-balance by the initial block.

Analysis: Brown owns the size and style to line up as a three-technique tackle or one-gap defensive lineman. He boasts stellar upside and should only improve as he gets stronger with time.

As uncertain as the interior defensive line class may be, it is incredibly deep. For this reason, players like Brown have been last on the depth chart and forgotten. Yet, if there’s any mid-round defensive tackle that’s worth remembering, it’s Brown. The Texas A&M defensive tackle has long been a highly-regarded talent, and his best football is ahead of him.

Brown was a four-star recruit in the 2018 recruiting class. Already standing at 6’4″ and 270 pounds, Brown was a top-250 prospect and viewed as one of the best up-and-coming defensive linemen in the nation. He received scholarship offers from teams such as Alabama, Ohio State, Oklahoma, and Michigan. In the end, the Arlington, Texas native chose to attend Texas A&M in order to stay close to home.

It took time for Brown to become one of the SEC’s premier defensive linemen, but the flashes were seen early and often. He saw the field in 13 games as a true freshman. Over that span, the Texas A&M defensive tackle logged 14 total tackles and a tackle for loss. As a result, he was named to the All-SEC Freshman Team, raising expectations for his second season.

In 2019, Brown played in 13 games, started 11, and subsequently upped his production. He left room for further growth after the 2019 campaign but still managed to amass 21 total tackles, 2.0 tackles for loss, a half-sack, and a pass deflection in his time on the field. Brown’s 2019 campaign, as it turned out, would be a springboard for a breakout in 2020.

As a true junior, Brown exploded and became one of the best defensive tackles in the SEC. In nine games, Brown produced at a career-high clip, earning 22 total tackles, 7.5 tackles for loss, and 5.5 sacks. For his production, Brown earned first-team All-SEC recognition. Unsurprisingly, he used this opportunity to declare for the 2021 NFL Draft and sell while his stock was high.

Brown is often viewed as a Day 3 defensive lineman prospect, but I think he has the traits to rise into Day 2. His upside is incredibly enticing, and his pro day performance only reinforced his stock.

Brown’s tape confirms his numbers. He has uncanny explosiveness for his size off the line, and he carries a ton of power within his frame. He’s heavy-handed, extremely aggressive, and naturally leveraged with his frame. His combination of burst and length can be devastating for interior blockers. He can work on further controlling his traits, but all the necessary tools are there for him to start and produce eventually at the next level.

Which schemes might best acclimate for Brown’s specific skill set?

Brown played a little out of position at Texas A&M. He often shaded inside, closer to the zero and one-technique positions, but his explosiveness and length profile very well at the three-technique.

Brown’s experience on the inside is valuable. It provides him with versatility along the interior and affords him some scheme flexibility. However, Brown’s best fits might be found as a three-tech in a 4-3 scheme. Nevertheless, he has the width and length to fulfill multiple roles, and in hybrid alignments, he’s just as valuable.

Brown is a spectacular physical talent in the NFL Draft. He’s young, checks every athletic box, and he’s only trending upward. Given the uncertainty of the defensive line class, however, Brown’s range is somewhat unclear.

He could go as early as the second round or fall into early Day 3. He offers excellent upside anywhere over that span for teams like the Jacksonville Jaguars, Dallas Cowboys, Seattle Seahawks, Cleveland Browns, and Las Vegas Raiders. In time, he could become one of the best value deals in the draft.