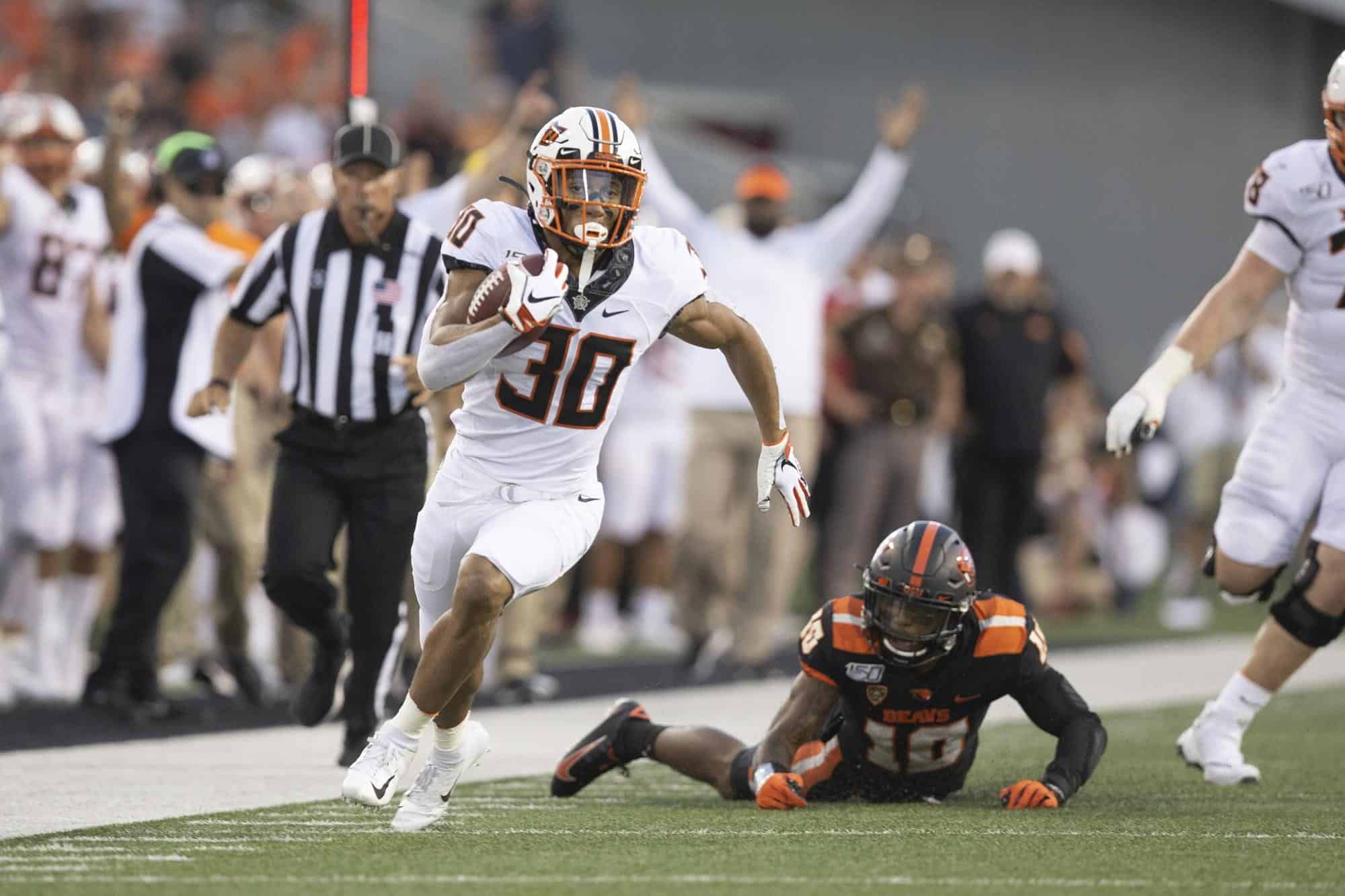 Every so often, a prospect comes along that hadn’t gotten a lot of opportunity in games but had played well when they did. A lot of these players are running backs who don’t get “starter” reps but play in a committee. This is what happened with Oklahoma State’s Chuba Hubbard. With Justice Hill taking the majority of snaps, Hubbard played rotationally but played very well when he did. Before the 2019 season, I listed Hubbard as my 5th best NFL Draft prospect from the Big 12. So far, he’s living up to the hype.

The Big 12 has a rich history of running backs. Players like Billy Sims, Barry Sanders, Ricky Williams, Adrian Peterson, Jamaal Charles, and Darren Sproles have all played at Big 12 schools and were widely successful in college and in the pros. Chuba Hubbard is making a name for himself and is trying to plant his name in history.

Chuba Hubbard currently has 521 rushing yards through 3 games, which leads the country. Hubbard is also tied for first (SMU’s Xavier Jones) in the country with 7 rushing touchdowns. He just posted his career-high of 256 rushing yards against Tulsa, including a 75-yard lightning strike to open the game.

Hubbard ranks 12th in yards per carry at 7.89, just behind Clemson’s Travis Etienne, but is first in rushing yards per game at 173.7. If Hubbard were to keep that pace up, he would roughly end up at 2,084 rushing yards this season. This would put Hubbard at the 3rd best single-season rushing yards total in the Big 12 since 1996… over Adrian Peterson, Darren Sproles, and Jamaal Charles.

He averages 7.2 yards per game more than the #2 guy. https://t.co/qqMvjlyIhj

We should have seen this coming in regards to Hubbard. A former track champion, the Canadian speedster chose Oklahoma State over Alabama, Auburn, Oklahoma, and Oregon. He wanted to be an Olympic sprinter, and judging by his speed on the field, that goal doesn’t seem far-fetched.

His name has come up in the Heisman discussion already. He would be the first foreign-born player to ever win the Heisman. His NFL Draft stock is at an all-time high. Hubbard has put the nation on notice. He has a huge game coming up against Texas this weekend, who ranks 23rd nationally and 3rd in the Big 12 in rushing defense. The last time they played, Hubbard rushed for 80 yards on only 9 carries when Oklahoma State pulled off an upset 38-35. Texas has lost 5 straight games to Oklahoma State in Austin, and if the Pokes win again, Hubbard will be a big reason why.

Hubbard has the potential to be the biggest riser in the NFL Draft, in a stacked class of skill position players. For now, however, Hubbard is looking to put his name in the history books.