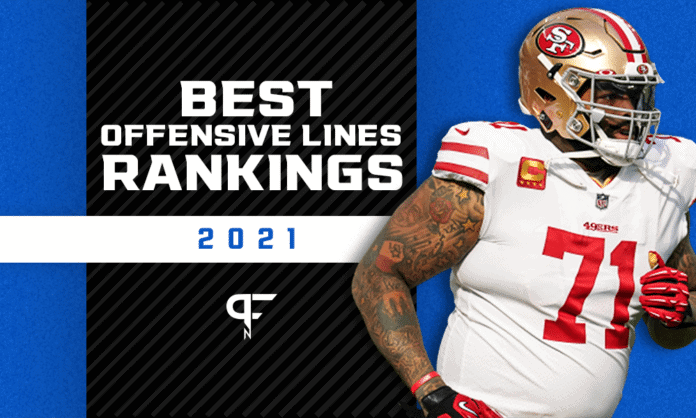 Who has the best offensive line in the NFL entering the 2021 season and where do the other 31 units fall on our Week 1 rankings?

Week 1 of the 2021 NFL season is here, but which are the best offensive lines in the league heading into the year? With a number of lines having seen competitions and injuries this offseason, how have the offensive rankings shaken out?

These rankings were produced based on a statistical analysis of the projected starting unit from team unofficial depth charts using data from Sports Info Solutions.

Which offensive line groups rank in the bottom 12 in 2021?

The flux on the Steelers’ offensive line makes it hard to put them anywhere but the bottom of the rankings. There is simply too much unknown across the group.

Cam Erving at left tackle for the Panthers is a major concern, and the rest of the line is not good enough to make up for it.

The Falcons have the talent to be much better than this. Unfortunately, we have not seen it, and they lost Alex Mack at center this offseason.

The Texans have elite talent at left tackle but major holes and uncertainty across the rest of the line.

The left side of Andrew Thomas and Shane Lemieux will make or break this Giants line. Nate Solder adds experience, but the jury is out whether he is an upgrade at right tackle.

The Bengals need immediate improvement from their line and no one more than 2019 first-round pick Jonah Williams.

With no Christian Darrisaw at left tackle, there is an element of trepidation on this Vikings’ offensive line. The matchup with the Bengals’ pass rush this week does somewhat mitigate the concern a little.

The Raiders are a huge unknown across the board, but the Ravens’ pass rush is hardly a proven commodity entering the year.

Jacksonville brings a solid middle trio to the field but concerns on the outside.

Miami could be starting Greg Little at left tackle this week. The rest of the line is hardly settled — several spots were up for grabs in the preseason.

Chicago has made some good moves this offseason, but this line is set for a huge test in Aaron Donald right out of the gate.

The Jets have the makings of a good group. They could be a serious riser in terms of the best offensive lines in the NFL if Alijah Vera-Tucker settles well next to Mekhi Becton.

Which teams sit in the middle tier for the best offensive line groups in the NFL in 2021?

Concerns about certain elements of these lines cause them to miss out on the best 15 of our Week 1 offensive line rankings for 2021. The Seahawks have concerns in the middle of the line, while the Broncos have concerns at right tackle and center.

The Titans group could be one that rises, but the Cardinals have a strong defense this week.

The Lions have scared a few people in the preseason with some performances. That right side of Halapoulivaati Vaitai and Penei Sewell will determine whether this is a top-10 line or one struggling to make the top 20.

The concern for the Bills is the return of Dion Dawkins from COVID-19. Can he be a stable anchor at left tackle?

The cohesion across this line is important, and the addition of Alex Mack at center is a huge bonus. This is a really strong group who should be especially powerful in the run game.

The right side of this line is one of the best trios in the league. However, having two relative question marks on the left side could be dangerous. Jordan Mailata and Isaac Seumalo could be the difference between the Eagles challenging for the playoffs or the first pick in the draft.

Missing David Bakhtiari for six weeks is a huge blow for the Packers. It is enough to drop them outside the top 10 of our offensive line rankings heading into Week 1 of the 2021 season. The remainder of the line is solid, but it severely lacks the high upside that Bakhtiari brings.

Across the line, this group is arguably one of the most talented combinations as individuals. The issue is the limited time together to gel — that could be a concern. The upside is there, but this group could struggle if communication is a problem in Week 1.

The addition of Rodney Hudson at center makes this one of my favorite groups in the entire league. They have no obvious weak points across the line and a matchup with a Titans’ defense that can look toothless against a good OL.

Which teams make up the 10 best offensive lines in the NFL in 2021?

We will learn a lot about the Rams in Week 1 as they go up against the Khalil Mack-led Chicago defense. The right side of the line is the weakness, especially with Brian Allen at center, a new piece anchoring them this season after the departure of Austin Blythe.

Frankly, this is an unknown group in terms of the offensive line rankings for the 2021 season. Orlando Brown Jr. was a top-quality right tackle but is transitioning over to left tackle. Lucas Niang, Creed Humphrey, and Trey Smith have all flashed, but they are essentially three rookies on the right side of the line. Going up against Myles Garrett and the Browns this week will tell us a lot about them.

Eric Fisher might start Week 1 — if so, the Colts are set to jump up even further in the top 10 rankings of the best offensive lines heading into Week 1. However, with Julién Davenport set to start in Fisher’s place, the uncertainty remains.

All around, it has been a bumpy last few weeks for the Colts’ offensive line with injuries and trips to the COVID-19/reserve list.

A solid but unspectacular group for the Patriots should handle this week with relative ease. Miami’s pass rush should not cause major problems for a veteran line. There is no obvious weak point, but if anyone knows how to exploit this group, it would be their former coach Brian Flores.

In Tyron Smith, La’el Collins, and Zack Martin, the Cowboys may have the best trio in the entire league. However, Collins has had injury concerns, and Martin could miss Week 1 of the season. While Mike McCarthy refuses to rule him out, the Cowboys stay middle of the top 10 in our offensive line rankings. However, if he is ruled out, they slide way back outside the top 10 for Week 1.

Lots to like here in terms of the five starters returning. However, Cleveland’s offensive line falls down these rankings just a touch with some lapses that we saw last year. If Jedrick Wills improves and Wyatt Teller stays healthy, this will be a top-three line in these rankings in a couple of weeks.

A solid trio of Wes Schweitzer, Chase Roullier, and Brandon Scherff anchors the Washington line. Currently, they have Charles Leno and Cornelius Lucas on the outside, which is a solid pairing. This group looks to easily be a top-five unit this season, but this is a tough first week against Joey Bosa and the Chargers.

The loss of Brown could have been a concern. However, filling that hole with Alejandro Villanueva should mean the Ravens do not miss a beat. There might be teething pains, but the Raiders’ defensive line is not likely to exploit them significantly. This is a frankly terrifying group.

Another team returning five talented starters is always a positive. If Donovan Smith improves this year and Tristan Wirfs develops further, the Buccaneers will be competing to top these offensive line rankings in a couple of weeks.

Who is the best offensive line in the NFL heading into 2021?

Which offensive line tops our rankings as we head towards the 2021 NFL season?

The Saints just have such a good group across the board with no major holes anywhere. They return all five starters and are perhaps the only known commodity outside of running back on the Saints’ roster. This group in front of him should give Jameis Winston every chance to succeed.

All stats are from Sports Info Solutions.