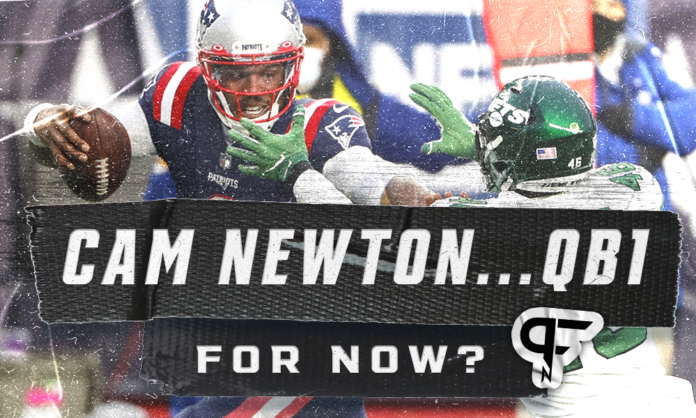 Belichick says Cam Newton is Patriots’ starting QB, but for how long?

New England Patriots head coach Bill Belichick says that Cam Newton is the starting QB over Mac Jones, but for how long will that be?

The New England Patriots have an open quarterback competition between Cam Newton and Mac Jones. Unless they don’t. Bill Belichick seemed to suggest the latter Saturday morning, saying that “Cam’s our starting quarterback. I think I’ve said that.” Which probably means for now.

Jones, we’ve heard, has impressed teammates by poise, decision-making, and accuracy — particularly given that he’s just a rookie. And short of Newton having a throwback elite season, it’s hard to see how Jones doesn’t become the starter at some point in 2021.

But that point is some point in the future, based on Belichick’s remarks Saturday.

When asked in a follow-up question if his position is that Newton is the starter short of injury, Belichick responded: “I just answered that question.” It’s easy to see how reporters were a bit confused because earlier in the news conference, Belichick said this of the quarterback position: “I’m sure it will be a hard decision.”

Newton deserves to begin the season as Patriots’ starter

So which is it — Cam’s the starter or the coaching staff must make a tough decision?

Probably both. Newton is held in high regard within the Patriots’ organization, and he deserves to begin this battle as the frontrunner. Even after an up and down 2020 season. Newton has been open about the fact that he was never the same player after catching COVID-19 midway through the year.

“By the time I came back, I didn’t feel comfortable physically, skillfully,” Newton said on the I Am Athlete podcast in February. “A lot of that discomfort came pre-snap. I’m lost. I’m thinking too much. … The offense kept going, and I was stopped and stagnant for two weeks. By the time I came back, it was new terminology. … I wasn’t just trying to learn a system for what it was, I was learning a, let’s be honest, 20-year system in two months.”

Newton finished his first year in New England having completed 65.8 percent of his passes for 2,657 yards with 8 touchdowns and 10 interceptions. There were times it looked as though his arm was shot.

But he also rushed for 12 touchdowns, and it’s not hard to envision the Patriots using the former league MVP as a weapon in the red zone, even if (when?) Jones eventually takes over.

Newton seems to understand his place on the team and has taken the NFL Draft‘s No. 15 pick under his wing.

“Ever since I’ve been here, there’s been a quarterback competition. I think in essence, that’s the underlying Patriot Way. Every position has a competition there, and the quarterback position is no different,” Newton said Friday.

A tough part of the evaluation process is how different Jones and Newton are as players. Newton is a dual-threat. On the other hand, Jones is a pocket passer who completed an absurd 77.4 percent of his attempts for 4,500 yards, 41 touchdowns, and 4 interceptions his final year at Alabama.