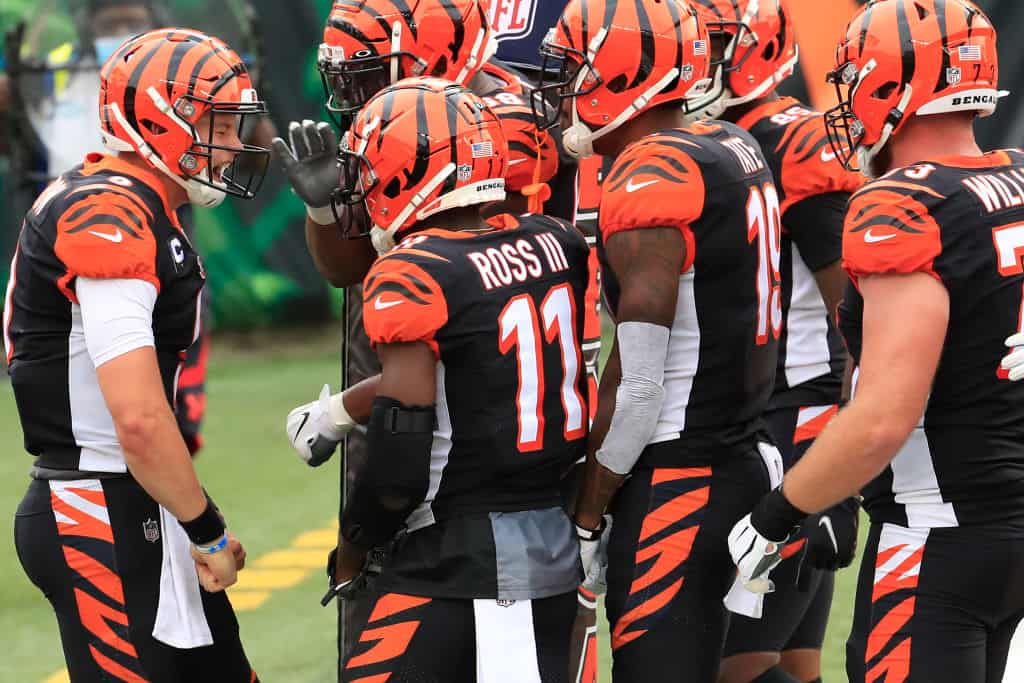 CINCINNATI, OHIO - SEPTEMBER 13: Quarterback Joe Burrow #9 of the Cincinnati Bengals celebrates with teammates after scoring his first career NFL touchdown against the Los Angeles Chargers during the first quarter at Paul Brown Stadium on September 13, 2020 in Cincinnati, Ohio. (Photo by Andy Lyons/Getty Images)
What's in this article? Click to show
Joe Burrow and the Battle of Ohio
Mayfield is digging himself quite the hole
A new era in Ohio?

Joe Burrow impressed with both his arm and legs to begin his NFL career. However, coming up short won’t cut it for the man who hopes to be the face of Cincinnati sports. Now, the Bengals will look to even their record Thursday night when traveling 250 miles North to face Baker Mayfield and the Cleveland Browns in the Battle of Ohio.

Mayfield and Burrow are more than just the top choices of their respective draft classes. The two became household names in their final collegiate seasons. Mayfield made magic for the Oklahoma Sooners in 2017, while Burrow bullied his way through the SEC in 2019. And, after what seemed to be a rejuvenation in both programs, each hoisted the coveted Heisman Trophy to close out the year.

Naturally, a jump to the next level would be second nature, right? Nope. Not in the slightest.

Burrow is one game into his NFL career but hopes to improve. As for Mayfield, the Rookie of the Year confetti has been swept. Fans of the franchise are expecting better results. Two Heisman winners will take the field at FirstEnergy Stadium, but those highlight moments might be few and far between two very unknown rosters.

Joe Burrow and the Battle of Ohio

What more could Bengals fans ask for when No.9 made his long-awaited debut on Sunday at Paul Brown Stadium? Burrow hardly looked like someone playing their first NFL game — specifically in the team’s final drive.

Going 8-of-11 for 70 yards and leading a 14-play drive against the clock, this was the moment the Jungle would have roared if fans were allowed inside. A pass interference call negated his first touchdown to A.J. Green, and a Randy Bullock missed field goal made the 23-year-old the 13th consecutive quarterback drafted No.1 to lose his first start.

“At the end of the day, I made too many mistakes for us to win the game and we didn’t make enough plays,” Burrow said.

That perhaps is a harsh remark for the Bengals’ starter, who was only a throwaway from ending the streak. Burrow finished 23-of-36 passing for 193 yards and scoring a touchdown on a 23-yard run. Then again, that “one” throw could have come in multiple chances.

During the third quarter, Burrow had two opportunities to take the lead. The first throw was a bit off-line, yet still catchable for fourth-year receiver John Ross. The second came two plays later to Green, who blew past a pair of Chargers but was overthrown by several yards.

Then came the interception before the final drive. Understanding the pressure, Burrow looked for positive yards with Giovani Bernard but instead found Melvin Ingram jumping the route, leading to what could have been a game-sealing play.

“‘D.’ I can’t miss that throw to A.J. [in the end zone],” Burrow said on his overall grade. “A high schooler can make that throw. And I can’t throw the ball right to Melvin Ingram when we’re in scoring range, so it was a tough way to lose.”

Mayfield is digging himself quite the hole

New coach, new system, same story for Cleveland. Even with Kevin Stefanski looking like an upgrade over Freddie Kitchens, the Browns lost their 15th consecutive opener. The problem, however, might not be the coaching anymore, but rather Mayfield himself.

Ever since setting the rookie touchdown record in 2018, Mayfield’s regression has been prevalent. It’s not just in the form of passing statistics where Mayfield has fallen short. More than anything, his confidence has been shaken.

Even with the fancy faces and star-studded standouts on offense, Mayfield’s play remained poor despite the team’s recent makeover. Going 21-of-39 for 189 yards and only scoring one touchdown, numbers like that won’t be enough to get by and are unacceptable for the third-year quarterback.

“It has to come naturally,” Mayfield said on his relationship with Beckham Jr. “Obviously, you game plan and you scheme up things to get the ball in your playmakers’ hands, but when it comes to game time, they are going to give us certain looks that might take that away.”

Week 1 is always a birthplace for overreactions, so Mayfield’s 19th quarterback ranking and 18.98 Offensive Share Metric score might be a blunder on a productive year. Plus, the Ravens defense is considered by some to be the best in the league. A Week 2 matchup against Cincinnati could paint a stronger picture.

Bengals can eat on Thursday night

Stefanski’s run-first system resulted in moderate success against the third total defense, according to Football Outsiders. Both Kareem Hunt and Nick Chubb averaged over five yards per run and saw at least ten carries. However, the Bengals’ new front line could limit the Browns to relying heavily on the duo in the backfield.

Cleveland rookie tackle Jedrick Wills struggled against pass rushers, allowing three pressures and a sack. The same could be said for Jack Conklin, who surprisingly allowed two pressures and one of the 12 quarterback hits on the night.

For Cincinnati, it’s about building off the week before. Veterans such as Carl Lawson and Carlos Dunlap found ways to pressure Tyrod Taylor on third down. The same could be said for newcomers Akeem Davis-Gaither and Josh Bynes, each who recorded a quarterback hit while the latter tallied a sack. If Mayfield struggles under pressure, expect the Bengals to trust D.J. Reader to step up against the run.

A new era in Ohio?

Mistakes are bound to happen in the NFL for any young quarterback. Both Ohio gunslingers are under 26, with Mayfield reaching that mark in April of next year. The Browns offseason was built around their hopeful franchise quarterback, but a limited offseason cost them time. As for Cincinnati, their rebuild is just beginning with Burrow as the key.

Thursday’s outing is a chance for one AFC North team to claim bragging rights. More importantly, it’ll show how the two commanders of the offense face prove-it moments after a devastating loss. One week can’t prove it Burrow is the answer, but responses in adversity like Sunday certainly can earn a team’s trust.

“He’s unbelievable. The guy doesn’t flinch,” Green said on Burrow’s first start. “The way he handled himself on that last drive was unbelievable.

“We got a special one in Joe, and we’re gonna be better next week.”