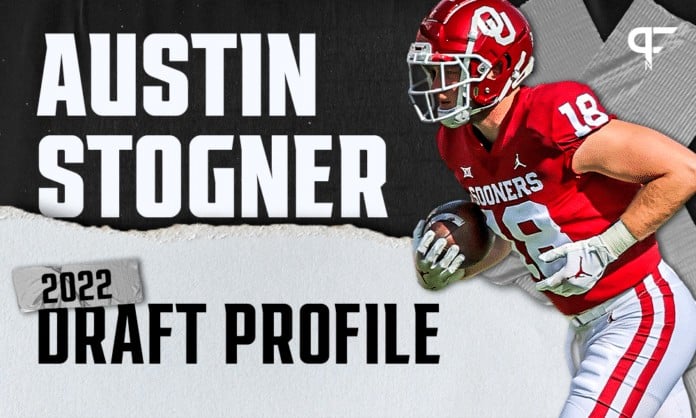 For a moment last fall, Austin Stogner might have never been able to play the game again, let alone a 2022 NFL Draft prospect. Fully healthy again, the Oklahoma tight end is primed to be one of the best at the position. He might not have the same reputation as some of his contemporaries in the class, but Stogner’s scouting report reveals a potential Day 2 NFL Draft prospect.

Kyle Pitts reset expectations of the tight end position last season. Somewhat unfairly, there is a clamor to find the next athletic, position-transcending unicorn. Therein lies the problem. A unicorn is a mythical beast that has to be seen to be believed. While that character doesn’t exist in this class, there are several excellent tight ends.

Stogner belongs in that latter category, and his scouting report confirms his NFL Draft credentials.

While pass-catching tight ends that create mismatches up the seam become more popular, the ability to block and pass protect is still necessary. As such, the tight end position is one of the most demanding from a versatility standpoint. Stogner checks all the boxes here.

As Oklahoma’s TE, Stogner has been used in multiple alignments. He can line up as a receiver in the slot, out wide to the boundary, or field side. His routine in-line usage gives him opportunities to leak out into passing routes, but he’s also utilized as a blocker. Furthermore, he has snaps at H-back in Oklahoma’s system.

A receiving mismatch and willing-and-able blocker

As a receiving threat, Stogner displays deceptive athleticism for his size. He has a quick first step that allows him to get into receiving routes smoothly. Additionally, he moves fluidly in the open field, allowing him to ghost into soft spots in zone coverage. Stogner turns and presents himself well, allowing his quarterback to hit him in the numbers.

His size and physicality ensure he’s an excellent target in contested-catch situations. The Oklahoma tight end can use his size advantage to pluck the ball from the air and corral it to his body.

As a blocker, Stogner is solid both in run blocking and pass protection. He has a good understanding of angles and routinely uses that understanding to open running lanes. The Oklahoma TE neutralizes linebackers and blitzing defensive backs easily while not being afraid to confront stronger defensive ends.

Although Stogner presents as a well-rounded NFL Draft prospect, there are areas for improvement in his scouting report.

During the games studied, there were several drops. These came in a variety of locations and game situations on the field. Stogner will need to work to eliminate these from his game as the 2021 college football season continues.

While Stogner demonstrates technical knowledge and is a willing blocker, he would benefit from being stronger. While he comfortably neutralizes more undersized linebackers and defensive backs, he’s at risk of being constantly overpowered against more physical defensive linemen in the NFL.

The knee injury that could have ended his career seems to be an isolated incident. Nevertheless, it will be an area of investigation for NFL teams.

Fully healthy again for the 2021 season, Stogner thankfully doesn’t have to reflect. The Oklahoma tight end can look forward as he attempts to stamp his name on this 2022 NFL Draft class. Be under no illusion — he is one of the best in the class.

Yet, it’s worth reflecting on Stogner’s journey to the NFL Draft.

With his dad a former wide receiver at Baylor and his cousin a walk-on at North Carolina, there was an inevitability about his progression through the footballing ranks. Despite this, before February of 2017, the young tight end had just one FBS offer from UTSA.

That soon changed with an MVP performance at the Houston Opening Regional Camp. Suddenly, Stogner was hot stuff in the recruiting world. A four-star recruit, the third-best tight end in the 2019 class, the Plano native had nearly 30 college football programs beating a path to Prestonwood Christian Academy.

Although he committed to Oklahoma before his junior season, the interest remained as Stogner racked up 1,400 receiving yards and 21 touchdowns through three years. While the interest never waned, Stogner’s commitment to the Sooners never wavered. Having played 7-on-7 ball with fellow 2019 commit Spencer Rattler, the Oklahoma-bound TE was excited to renew that relationship.

“It’ll be cool to catch some balls from Spencer and create some chemistry.”

With the transfer of Jalen Hurts into Norman, that relationship would have to wait. However, Stogner’s impact on the Oklahoma football team would not.

The young tight end saw playing time in all 14 games of his freshman season. While he impressed as a blocker and pass catcher, he also added special-teams value, including a blocked punt.

Although his freshman season box score of 7 receptions for 66 yards and 2 touchdowns was hardly earth-shattering, the timing of his contributions was significant. After securing his first receptions in just his second appearance, Stogner accounted for 2 touchdowns to help drag Oklahoma back from a 28-3 deficit to a 34-31 win over Baylor.

He also caught passes in the Big 12 Championship Game and CFB Playoffs.

During the offseason before the 2020 campaign, Stogner worked out with Green Bay Packers tight end Jace Sternberger, hoping to develop his game. The results on the field for Oklahoma were almost instantaneous. Renewing his relationship with Rattler, Stogner snagged a career-high 5 receptions and 83 yards in the second game of the season.

A run of impressive performances followed — 74 yards against Iowa, 56 yards and a score in the Red River Rivalry game with Texas, 77 yards and a touchdown against Texas Tech, 75 yards and a score against Kansas. The Oklahoma tight end was on a roll.

Unfortunately, the Kansas game turned from exceptional performance to emotional turmoil. Stogner suffered a knee injury on a nasty hit, but the worst was to come. The injury developed an ugly strep infection that required multiple MRIs and a heavy dose of antibiotics.

The ordeal cost him 30 pounds of weight and almost two months of his career. But, it could have been worse, and miraculously the Oklahoma TE returned to the field for the season finale. Furthermore, he added a 12-yard reception to his résumé to cap a remarkable comeback. Despite missing time, he earned second-team All-Big 12 honors.

Which takes us back to where we started. The Oklahoma tight end is a matchup nightmare for the opposition. As his scouting report indicates, there’s every reason to believe that Stogner can be a Day 2 prospect in the 2022 NFL Draft class.