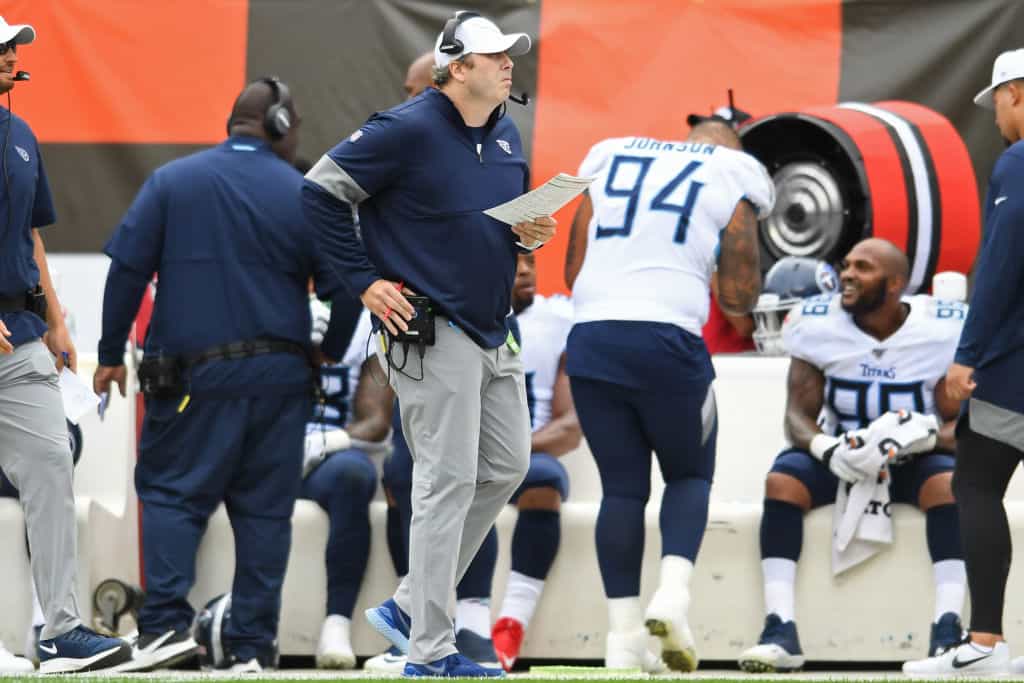 CLEVELAND, OH - SEPTEMBER 8, 2019: Offensive coordinator Arthur Smith of the Tennessee Titans on the sideline in the first quarter of a game against the Cleveland Browns on September 8, 2019 at FirstEnergy Stadium in Cleveland, Ohio. Tennessee won 43-13. (Photo by: 2019 Nick Cammett/Diamond Images via Getty Images)
What's in this article? Click to show
Who is Arthur Smith?
From position coach to offensive juggernaut
Who may show interest in Smith?

Who is Arthur Smith?

The son of FedEx founder and billionaire Fred Smith, Arthur Smith has been around football since his youth. Smith played both offense and defense and was a team captain for his high school football team. Smith then went on to play offensive line for the North Carolina Tar Heels, where injuries plagued his career.

After Smith’s playing days were over, he began to pay his dues in the coaching world. Smith spent one season as a graduate assistant at his alma mater before being named a defensive quality assistant for Washington. Smith would spend two seasons in Washington before returning to the college ranks as a defensive intern for Ole Miss.

From position coach to offensive juggernaut

In Smith’s first season as Titans offensive coordinator, the team reached heights they hadn’t seen in more than a decade. Smith revitalized former Miami Dolphins QB Ryan Tannehill’s career and helmed a potent offense. Tennessee would score more points in 2019 than they had in 16 seasons — the season Steve McNair took home MVP honors.

This season has been even better for Smith and the Titans. It’s a scheme based on balance, and the running attack of Derrick Henry complemented by a lethal play-action passing game keeps opposing defenses on their toes.

Through 14 games, Tennessee has already scored more points than they did all of last season. They’ve also broken through the nine-win barrier they’d been stuck at for four consecutive seasons. This, coupled with an AFC Championship game appearance last season — upsetting Tom Brady and the Patriots along the way — has made Arthur Smith a hot commodity.

The coaching carousel is already in full swing, and it will only speed up as teams are eliminated from the playoffs. If the Titans have another deep run in the playoffs, Smith could garner multiple suitors.

Who may show interest in Smith?

As NFL Draft Insider Tony Pauline reported earlier this week on the Draft Insiders podcast, Jacksonville has already shown interest in the Titans offensive coordinator, along with their interest in Kansas City Chiefs offensive coordinator Eric Bieniemy. Jacksonville has secured the first overall pick in the 2021 NFL Draft after a battle with the Jets. That likely means Trevor Lawrence is on his way to serve as the quarterback of the Jags’ future.

Arthur Smith has shown the ability to develop quarterbacks, working wonders in Tennessee with Tannehill. He would not shy away from the tremendous project of indoctrinating (presumably) Trevor Lawrence to the NFL.

If the Titans make noise in the playoffs as they did last year, Jacksonville won’t be the only team interested in Arthur Smith. Any team who is looking for an offensive-minded coach and can build on a solid run game should have Smith near the top of their list. It shouldn’t surprise anyone to see Detroit or Chicago show an interest in bringing Smith in for an interview.

Other teams who have been connected with Smith include the Atlanta Falcons, Detroit Lions, and Houston Texans.