2022 4-Round NFL Mock Draft: Carson Strong, Sam Howell are the first quarterbacks off the board

Russell Wilson hasn't played well since returning from injured reserve. What has changed for the Seahawks QB?

By Lucas Ellinas
November 29, 2021
What's in this article? Click to show
The last few weeks have been difficult for Russell Wilson
Wilson’s advanced metrics have slipped since his return
Comparing Russell Wilson’s weekly grades
Comparing Wilson’s Week 10 performance to the rest of his season
Seattle desperately needs Wilson to play better

Against the Los Angeles Rams in Week 5, Seahawks QB Russell Wilson injured the middle finger on his throwing hand badly enough that it required surgery. That injury forced Wilson onto injured reserve and Geno Smith into the starting lineup.

Wilson has been back for several weeks, but the Seahawks have underperformed despite the QB’s return. Let’s use the advanced metrics to see what has changed for Wilson.

The last few weeks have been difficult for Russell Wilson

Last month, I wrote an article about how big the loss of Wilson would be for the Seahawks offense. And while Smith’s tenure as the starter was underwhelming, Wilson’s return hasn’t gone as well as he would have hoped.

His first game back against the Green Bay Packers was a disaster, especially by his standards. He threw for a paltry 161 yards and 2 interceptions. He showed signs of improvement the following week, throwing for 207 yards against the Arizona Cardinals, but that was still a below-average performance for a player of Wilson’s caliber.

If the Seahawks had managed to win either of those games, their QB’s struggles wouldn’t be such a cause for concern. However, in a twist that won’t come as a surprise to those who have watched the Seahawks in recent years, Wilson’s underperformance resulted in losses in both cases.

When Wilson doesn’t play at an elite level, Seattle rarely manages to overcome his failings.

Wilson’s advanced metrics have slipped since his return

To help us understand why Wilson’s statistics have fallen off in the last few weeks, let’s turn to the Offensive Value Metric (OVM).

When Wilson went onto injured reserve, he had the highest OVM grade of any quarterback, at 32.58. In the two games since his return, the Seahawks QB has earned his worst grades of the season, dropping his overall grade by more than six points to 26.37.

To further illustrate the difference in Wilson’s play pre- and post-injury, let’s look at his OVM grades from each week of the season so far. You can see them in the chart below, marked by the black dots. For comparison, the yellow line represents the average OVM grade for quarterbacks so far in 2021. 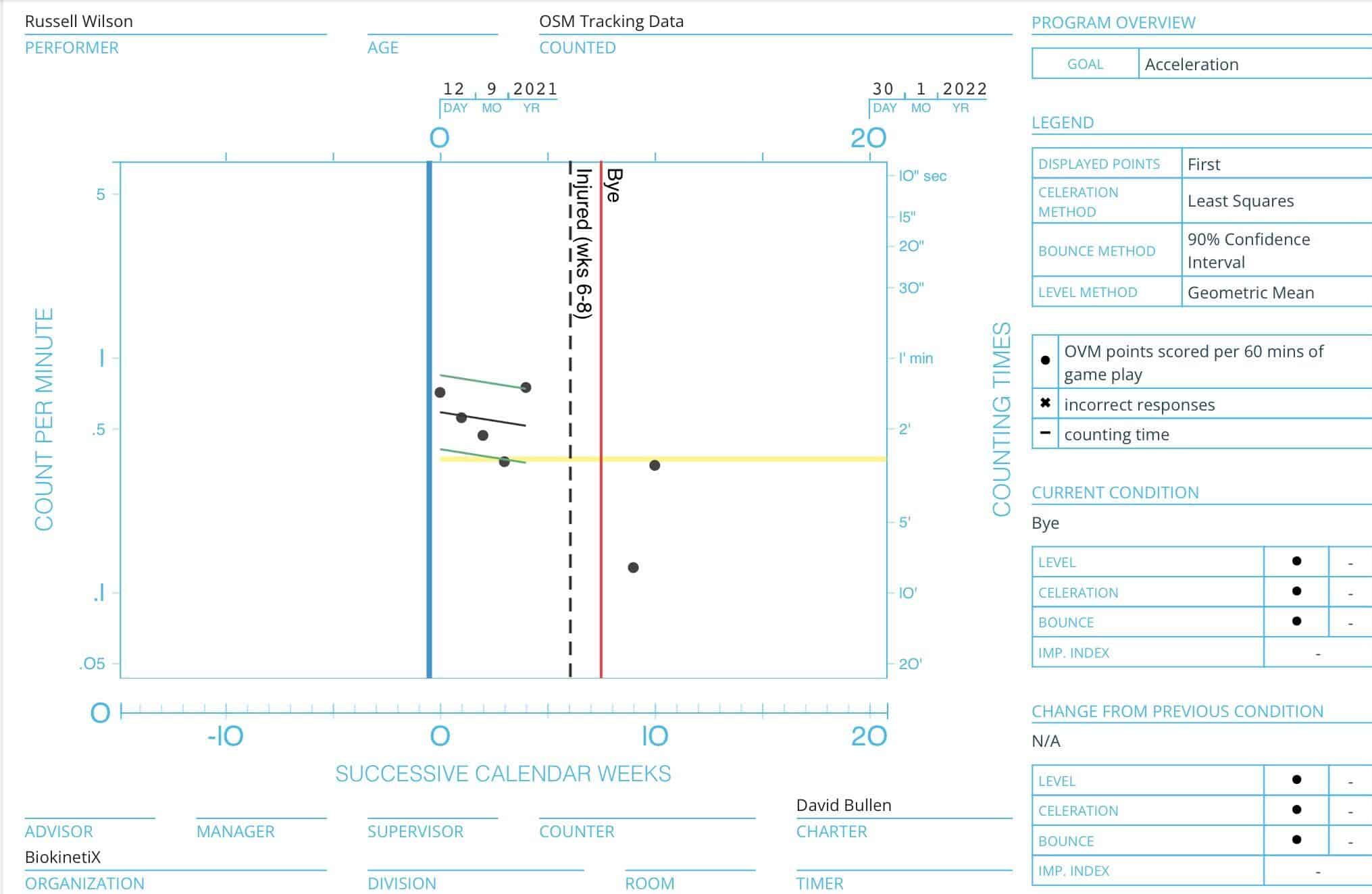 Before his injury, all but one of Wilson’s grades were above the league average. He received a pair of grades above 40 points, both of which ranked among the top 12 grades earned by quarterbacks so far this season.

The situation changed dramatically after Wilson’s injury. His Week 10 grade was a 7.65, worse than any of Smith’s games by a wide margin. Wilson’s grade the next week — 20.85 — was a significant improvement, but still only slightly better than the grades earned by Smith, most of which fall into the 15- to 20-point range.

At this point, it’s not even clear if Wilson represents an upgrade over his backup, especially since Smith earned a grade of 48.87 in his final game against the Jacksonville Jaguars. Obviously, that’s not elite competition, but it only casts further doubt on the decision to rush Wilson’s return.

It is worth taking a look at Wilson’s Week 10 performance in particular. It was easily Wilson’s worst game of the season, and it earned him the second-lowest OVM grade of his career.

Wilson tried to throw tough, contested passes in that game. He threw the ball an average of 12.3 yards downfield. That was higher than almost any other quarterback that week. He also threw into tight windows on 20% of his pass attempts.

Featured Story
Bengals vs. Titans Preview and Prediction: Derrick Henry and Ja’Marr Chase could be the difference this weekend

Those numbers are higher than Wilson’s season averages, but not by a considerable margin. The difference is, Wilson is usually extremely successful in completing tough passes, which is why his pre-injury OVM grade was so high.

In Week 10, that was far from the case. Wilson’s average air yards on his completions was just 3.3 yards. Despite attempting a high number of deep throws, he rarely succeeded in completing them. In fact, Wilson struggled to complete passes in general, completing just 50% of his passes. Even worse, according to the NFL’s statistical projections, his completion rate was 7.2% lower than expected.

It should be clear to everyone that Wilson hasn’t played well since returning to the starting job. Perhaps he came back too early, and the injury to his finger has affected his play, particularly during his first game back. Or maybe it is simply taking Wilson some time to get back on track after missing four weeks.

Whatever the cause might be, the Seahawks can’t afford any more poor performances from their star QB. At this point in the season, Seattle would need a miracle to make their way into the playoffs. And as it has for many years now, any success that happens in Seattle starts with Wilson.

Is Nick Bosa playing tonight vs. the Packers?

Is Trey Hendrickson playing today vs. the Titans?