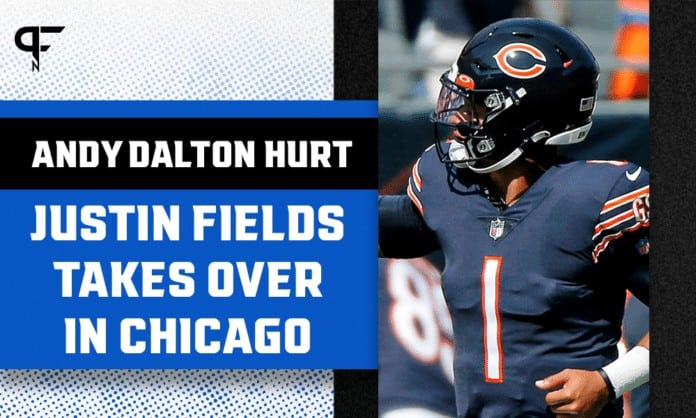 The Justin Fields era in Chicago may have officially begun after Andy Dalton exited the game with a leg injury. Here's everything we know.

By Cam Mellor
September 19, 2021
What's in this article? Click to show
Andy Dalton exits with left leg injury
Justin Fields takes over
How does Justin Fields impact the Bears for fantasy football?

The quarterback dilemma that has marred the first few weeks of the 2021 NFL season for the Chicago Bears got a bit murkier on Sunday. Starting QB Andy Dalton exited the game against the Cincinnati Bengals with a leg injury, making way for rookie first-round pick Justin Fields to take over.

Here’s what we know about Dalton’s injury and what Fields brings to the table.

Dalton led the Bears on a touchdown drive early and had the Chicago offense moving. Fields had been substituted in for a few carries and a pass attempt early before Dalton was reinserted back into the lineup.

Following his insertion back into the lineup, Dalton scrambled for a gain of 14 yards. But he came up lame as he jumped out of bounds.

The injury to Andy Dalton leaves the situation with Justin Fields incorrectly resolved but with the correct result.

Feel for Andy, but Justin is the future of the franchise. Play him.pic.twitter.com/15ITisfvYB

Dalton reentered the lineup before exiting once again. Reports suggest Dalton is out with a lower left leg injury. Dalton was 9/10 for 56 yards and an 11-yard touchdown to Allen Robinson with his return in question.

Dalton had also chipped in with 25 rushing yards on 2 carries.

It was always a matter of when Fields would take over, never a matter of if. Dalton was clearly brought in as a placeholder until Fields was ready, despite head coach Matt Nagy’s claims that he was their “it guy” and had been since last offseason.

Unfortunately for Fields, however, his place in the lineup came at a time of need rather than “deservedly so,” as I’m sure he would have preferred. Fields took over after Dalton attempted to give it another go following injury. His indoctrination was a two-minute drill in his first action back, taking a sack and throwing an incompletion.

The teams headed to the halftime break with Chicago leading Cincinnati, 7-0.

Chicago selected Fields 11th overall — the fourth of five QBs taken in the first round of the 2021 NFL Draft. While Trevor Lawrence, Zach Wilson, and Mac Jones were entrenched as their team’s respective starters to open the year, Fields (as well as San Francisco’s Trey Lance) did not.

Both Fields and Lance each begun their rookie seasons behind battle-tested veteran quarterbacks. If this is the moment that Fields takes over for the Bears, it certainly will go down a bit less serendipitously than he probably anticipated.

Though injuries are a part of football, it’s always difficult to root for a player who replaced another due to injury. Yet, Fields is the future for Chicago, and again, it was only a matter of when rather than if he would take over.

How does Justin Fields impact the Bears for fantasy football?

You never want to see a positional battle decided by injury. Nonetheless, once that door opens, it becomes inherently harder to close. While Dalton has not played poorly, it has not been inspiring either. It’s hard to quell the excitement surrounding the potential of Fields as the Bears’ starting QB. Fields is a dynamic signal-caller that can elevate this offense to heights due to his incredible arm strength and athletic prowess.

The Bears are an offense loaded with talent from a true alpha in Allen Robinson, a budding superstar WR in Darnell Mooney, a young TE breakout in Cole Kmet, and a legitimate three-down back in David Montgomery, all of whom are already weekly starters in fantasy. The addition of Fields raises the floor of everyone around him, as we saw in the preseason. While he is a mobile QB (4.4 40-yard dash), he is a passer first and then will tuck and run.

His ability to extend a play and get out of danger will also allow Mooney and Robinson to get open, possibly leading to bigger plays when game scripts are exchanged for pure talent. Fields will likely be a mid-QB2 should Dalton’s injury linger. However, as he gets more comfortable and reps under his belt, he will have low-end QB1 upside in fantasy. The future is now, and it is as bright as ever in the Windy City.