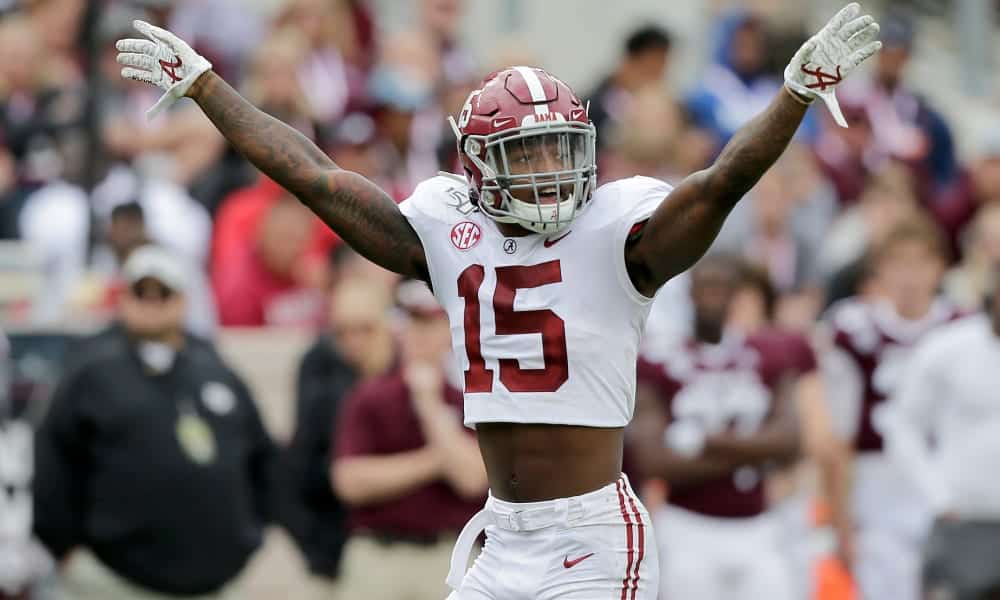 Alabama defensive back Xavier McKinney (15) waves off a coverage during the second half of an NCAA college football game against Texas A&M Saturday, Oct. 12, 2019, in College Station, Texas. (AP Photo/Sam Craft)

Career Snapshot
Two-year starter who earned First Team All-SEC honors and made 95 tackles (5.5 for loss) with three sacks, three interceptions, four forced fumbles and five pass breakups as a junior in 2019. Made 74 tackles (six for loss) with three sacks, two interceptions, two forced fumbles and 10 pass breakups as a sophomore.

Positives
Well-rounded safety who is effective against the run and the pass. Stays with coverage assignments and shows solid ball skills and good recognition with the pass in the air. Flashes the ability to line up over the slot receiver and stay on the opponent’s hip out of breaks.

Agile, aggressive and displays good change-of-direction skills. Gives effort against the run, goes after opponents and wraps up tackling. Displays a quick closing burst to the action. Quarterbacks the secondary very well.

Negatives
Deep speed may be a concern, which was confirmed at the Combine. Possesses poor hands for the interception. Does give up a fair share of underneath receptions.

Analysis
McKinney displayed terrific progress the past two seasons and is an instinctive safety who plays physical football. He needs to polish his game, but he comes with scheme versatility and could eventually break into a starting lineup in the NFL.